If prom was a high point of your life—first, I’m so, so sorry—then The Prom isn’t really for you. That’s because, if you’re straight, prom already was for you: a pseudo-adult ritual of formal dress, crowning “king” and “queen” and reifying tired, heteronormative social values. The joyful new Broadway musical, on the other hand, celebrates the shy, the nonbinary, or those who are simply gay and want to bring their same-sex bae to the dance. The worst I can report about mine is: I took a female friend and came home the same bored virgin.

I didn’t have to withstand a whole community’s homophobic b.s., as Emma (Caitlin Kinnunen) does when she announces her desire to attend with her girlfriend. Emma is a senior in small-town Indiana and the scandalized P.T.A. decides that, rather than be inclusive, better to call off the prom. This does not make the self-conscious Emma any more popular around the lockers.

Had The Prom’s creative team—book writers Bob Martin and Chad Beguelin and composer Matthew Sklar—limited the frame to this story of intolerance and resistance, it would be spinachly worthy and Trumpily relevant. But they wrap an outrageous showbiz satire around the earnest center, and the result is the perfect blend of salt and sweet. The tag line: Broadway Boomers try to save prom for a millennial lesbian who is totally embarrassed by them. A good premise executed well is the formula that wins here.

It seems that Emma’s travails end up trending on Twitter, and catch the attention of four despondent theater types on the night two of them get savage reviews for their latest vehicle, a turkey about Eleanor Roosevelt. Our stage-hogging quartet includes Dee Dee Allen (Beth Leavel), a power diva of the Liza Minnelli and Elaine Stritch mold (if not vintage); Barry Glickman, über-swishy leading man, played by Brooks Ashmanskas as if his career goal is to make Nathan Lane look butch; insanely pompous “dramatic” actor Trent Oliver (Christopher Sieber); and leggy, blonde chorine Angie (Angie Schworer)—she doesn’t get the best jokes, but uses her “crazy antelope legs” to excellent effect.

Sensing a PR opportunity that might also be a career bump, our stage-hogging heroes scamper to the Hoosier State to log time in front of news cameras. Of course, knowing zilch of the world south of the Nederlander, they immediately make things worse, inflaming the wrath of PTA bigot Mrs. Greene (Courtenay Collins), whose closeted daughter, Alyssa (Isabelle McCalla) is Emma’s secret girlfriend. Not in the closet is the admiration that Principal Hawkins (Michael Potts) has for Dee Dee. In a town where everyone greets the self-important arrival of “liberal Democrats from Broadway” with blank stares, Mr. Hawkins has a fanboy thrill when he meets the diva of his dreams. Potts, a lovely character actor who elevates every project he’s in, grounds this thoroughly decent fellow in good humor and unfussy dignity.

The combination of outsize Broadway personalities with more sensitively drawn small-town types is one of the cleverer features of the book, which is a model of efficiency and narrative drive. There’s a first-act finale twist that’s a real gut punch, and even the slight padding of musical numbers in the second act goes down amiably well. Sklar’s score, with bright, polished (only occasionally strained) lyrics by Beguelin, hits all the pleasure centers: the swoony romantic ballad (“Dance with You”), the Fosse-ish makeover bit (“Zazz”), the pseudo-Sondheim sophisticated ditty (“The Lady’s Improving”) and a touching anthem for LGBTQ kids in cyberspace (“Unruly Heart”). Director-choreographer Casey Nicholaw brings it all home with a dance-drunk staging that gets equal mileage out of a kick-ass corps of young performers crushing hip-hop formations, and Ashmanskas’s antic, potbellied jetés. The Prom is about a pure a Broadway thrill as you can get.

I don’t want to oversell the show in terms of depth or originality. The book is machine tooled, the score is unabashedly pastiche—earwormy hooks that show your cochlear no mercy. It’s the direct artistic descendent of Hairspray, Mean Girls and other candy-colored pop musicals that set tolerance to a bouncy beat. But in a season so far dominated by soul-dead atrocities such as King Kong and Pretty Woman, The Prom’s wit, craft and heart count for a lot. If we must crown a king and queen tonight, let’s give The Prom both. 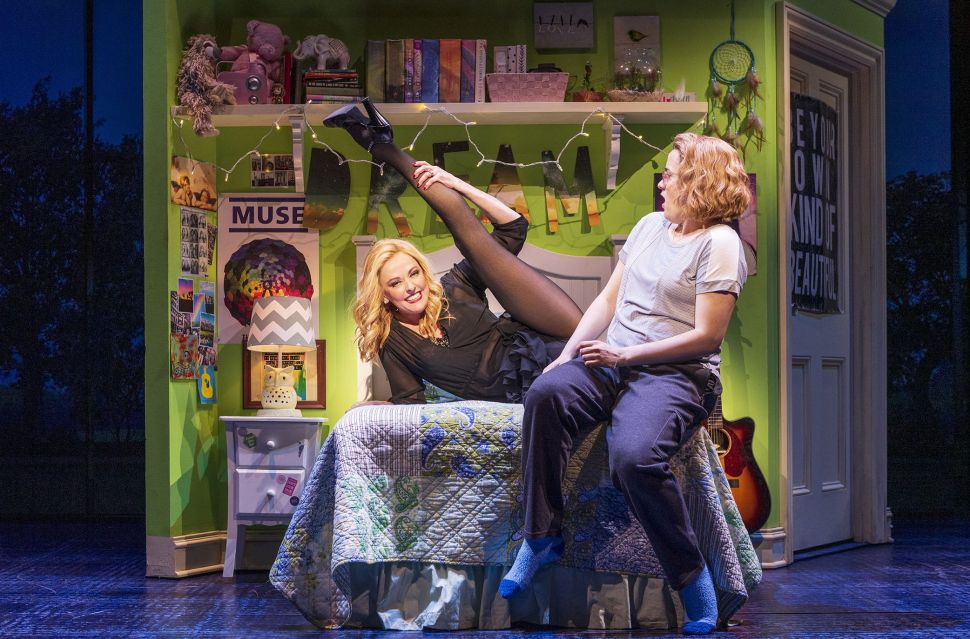