Watching it in a crowded movie theater is the equivalent of being wickedly hungover while trying to Red Bull through a 9 a.m. class called “Marshall McLuhan in the Information Age,” shopping the Disney Store website for sales, and texting with your best friend. You gain some creative if perhaps fuzzy-headed insights into our online consumer culture, but you’ll also come away feeling like you’ve been mugged.

That said, this sequel to 2012’s Wreck-It Ralph improves on the original in a few key ways. First off, it is a full-on two-hander, with Sarah Silverman’s Vanellope, a refugee from a broken Sugar Rush console, on equal footing with John C. Reilly’s shoeless lunk, continuing his Candide-like exploration of the world beyond his own Fix-It Felix video game.

Their friendship—for Ralph, it’s more of a toxic codependency—consists of yakking over root beers in the Tapper game and lying on the Madden NFL football field contemplating the nature of existence like characters from Dazed and Confused. Their dynamic companionship becomes the through line on which the film hangs its chaotic array of jokes, sometimes sharp and sometimes obvious pop commentary, as well as seemingly countless cameos. (Go figure that this would mark one of the final screen appearances of Marvel impresario Stan Lee—one of the many Disney corporate entities the film trots out like hunting trophies.) For Silverman, Vanellope marks one of her most satisfying screen roles. Reilly, who imbues Ralph with his troubled soul as much as he provides his voice, can place yet another feather his cap—this may be the prolific actor’s most accomplished year.

Because this time the pair venture beyond the anachronistic arcade in which they reside and on to the World Wide Web, the film has an opportunity to actualize the nebulous realm in which we spend far too much of our lives. It’s much like how Inside Out tried to make real the interior life of a child. (Bill Hader, who voiced that film’s Fear, has an uncredited appearance in this film as a Spamly, a click merchant who acts like a mid-’80s Time Square Three-card Monte dealer.)

But where that film took its cue from psychological studies and modern art, here the inspiration is entirely commercial. (After all, commerce is what most of us do on the internet, even when we think we are doing something else.) The web is visualized as a combination of a pollution-free Tokyo, the Jetsons, and the Mall of America. Twitter is a forest of blue birds; elsewhere, functionaries with reverse leaf blowers suck up the heart-shaped likes bestowed upon the viral videos in which Ralph stars. In what is a veritable orgy of cross promotion, every Mouse House asset has its moment, from its princesses to its Storm Troopers to its Muppets, and even sad-eyed Eeyore.

While there’s something dispiriting and cynical about this conflation of product placement and pop commentary, it does give the film a kitchen sink quality: there is literally something for everyone. My 11-year-old really enjoyed seeing the Disney princesses in contemporary outfits. And the movie wonks at our screening in Hollywood all laughed when one responds to Merida from the 2012 Pixar film Brave—speaking in her thick and nearly indecipherable Scottish accent—”She’s from the other studio.”

All these winks, nods and gags come careening at you at a furious pace; on the internet, it seems, no one needs to take a breath between jokes. The film’s few moments of reflection, like when Ralph regrettably wanders into the comments section of his videos and discovers how inexplicably cruel people are on the web, are a welcome reprieve from all this chaos and cloying desire to seem relevant.

That we should care so about the feelings of this second-tier video game character proves that, beneath the garish mudslide of corporate product, at least the film has a beating heart. 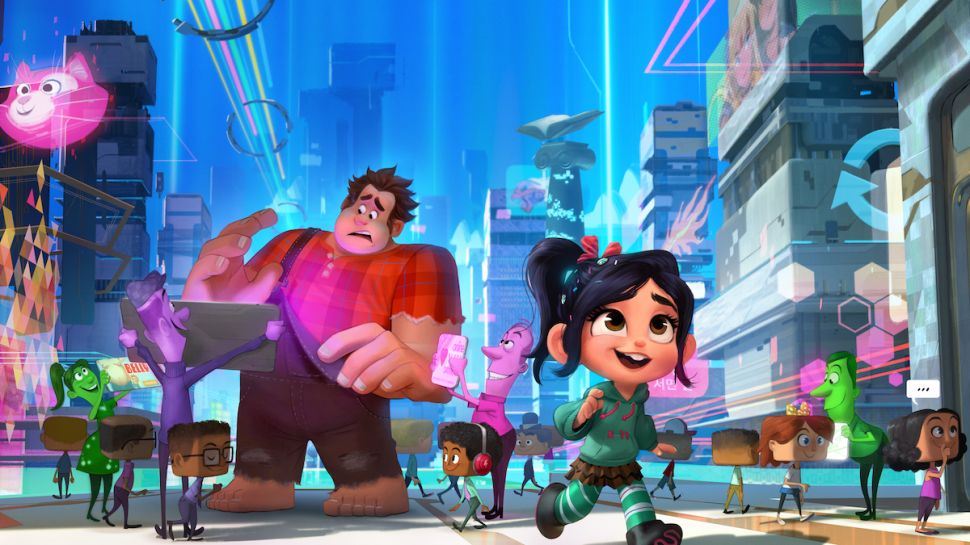