The Favourite, a rancid curiosity from the eccentric Greek director Yorgos Lanthimos (The Lobster), takes the standard British historical costume drama and drops it on its head. Despite several detours in the direction of historical incoherence and bad taste, it is riveting enough to win over film critics dedicated to profound lunacy. Box office popularity? That’s another matter entirely. But regardless of your tolerance for Restoration jabberwocky, you will be forced to admit the performance by Olivia Colman as England’s dim-witted Queen Anne is a masterpiece of madness.

Any relation to historical accuracy is highly dubious, but Lanthimos does create a lively picture of a monarch as loopy as George III. Sarah Churchill, a.k.a. Duchess of Marlborough (Rachel Weisz), the Queen’s closest confidante and favorite lady in waiting, has her work cut out for her. While her husband is off fighting the French, her duties include servicing Her Royal Highness in more ways than one. Queen Anne, who reigned from 1702 to 1707, is depicted as a twitchy, whiny, moaning invalid who suffered from gout and swollen limbs and is always vomiting. She is surrounded by fools and shares her private bedroom with Lady Sarah and 17 rabbits, one for each of the dead children from her 17 failed pregnancies.

Into this gold-leaf asylum of lush gardens, lavish rugs, lush tapestries and priceless antiques arrives Lady Sarah’s poor, ambitious cousin, Abigail Hill (a larky Emma Stone, in a role as far away from her turn in La La Land as the mind can imagine). Abigail comes from a noble ancestry, but her family has fallen on hard times, so her cousin gets her a job as a scullery maid in the royal household. Poor Abigail. Her duties include mopping up the Queen’s vomit, a fate she understandably decides to alter. Coarsened and burned by the lye soap she is forced to use on the masses of soiled laundry or stripped and whipped for the smallest infraction, she embarks on a plan to replace her benevolent cousin in the affections of the clumsy, overweight, socially embarrassing monarch.

It’s not long before Abigail is taking her cousin’s place in the palace parlor and in the Queen’s bed. The country is at war with France, but both women are too concerned with their personal rivalry to care much about affairs of state.  There are soldiers, advisors and occasional lovers around, but the men are reduced to bit parts. This movie is about the women, and the three actresses who play them are superb, with special emphasis on Olivia Colman’s needy, tragic, idiotic and very funny Queen Anne.

The Favourite, a period farce with a title that must have come from the same spelling class attended by Quentin Tarantino at the time of Inglourious Basterds, enhanced by beautiful clothes and a musical score that ranges from Handel and Vivaldi to Elton John. The men play fops in powdered wigs, the women play 18th century feminists, and the whole thing ends with a screen full of rabbits. The rabbits play themselves. 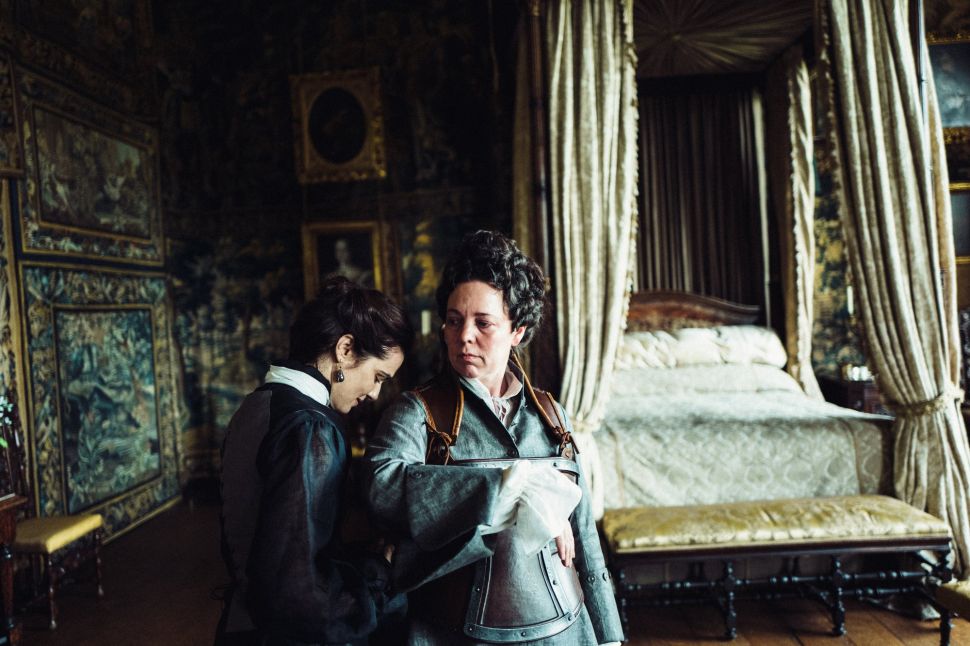