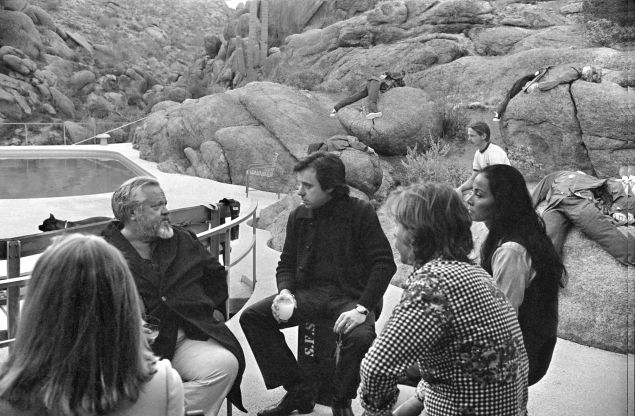 On set of The Other Side Of The Wind. Netflix

Last Friday, Netflix released the last motion picture ever made by the legendary American filmmaker Orson Welles, titled The Other Side of the Wind. First conceived by Welles in 1961, the film did not leave the editing suite until nearly four decades after the death of its creator.

Set in the 1970s, it tells of the downfall of director Jake Hannaford (John Huston), a relic from the Classic Hollywood era struggling to complete his latest project as he is eclipsed by a new generation of filmmakers.

The movie is incredibly hard to follow. Its dense plot, presented in a non-explanatory, matter-of-fact way, is shot in a snippety, mockumentary style, and edited at the speed of light. The Wind is a complicated sketch of an even more complicated world, one of which we only seem to scratch the surface. Just like Hannaford’s own unfinished movie, the complete story is left unknown.

When you finish the film, Netflix suggests you watch a documentary about Welles called They’ll Love Me When I’m Dead. If you initially passed up on it, definitely go back and watch; it’s a true telling of what was happening behind the cameras while making The Wind.

Orson Welles was a one-in-a-million genius. He ran a Broadway theatre company when he was 22 years old. At 23, he staged a radio performance based on H.G. Wells’ science fiction book, The War of the Worlds, that went down in history as the moment we realized the true power of media. And when he was 26, he wrote and directed Citizen Kane, which was—and remains—widely regarded as one of the greatest films ever made.

At an age where most people are just starting their careers, Welles had already reached the indisputable top of his trade. But the monumental name he had made for himself also cast a shadow so large it would take a lifetime to escape. 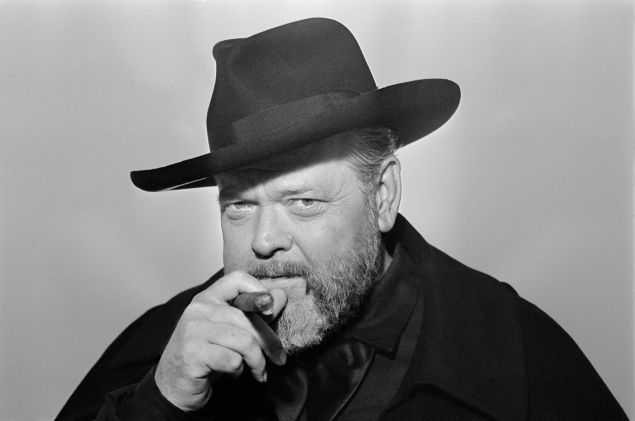 Orson Welles lives on in his final feature. Netflix

“Citizen Kane is the greatest curse of my life,” Welles later remarked. “Every time I do anything, people start comparing it to where it stands vis-à-vis what they call the greatest American movie. This is my curse.”

After making several movies that failed to live up to his gold standard, Welles fell out of favor with Hollywood decision-makers. Unwilling to compromise the integrity of his art, he struggled to finance his projects for decades.

Meanwhile, the film industry was changing rapidly. The era of New Hollywood (1967-1982), defined by films like Bonnie and Clyde and The Graduate, saw the rise of filmmakers who grew up with Citizen Kane and regarded Welles as a living legend, even though they were making big bank and he wasn’t. This uneasy relationship between student and teacher, and one’s inevitable demise at the hands of the other, not only defined the rest of Welles’ career, but would become the basis for his final picture.

If the similarities between Welles and Hannaford seem obvious to us now, just imagine how obvious they must have seemed to the cast and crew that made The Wind. Welles, confronted by close friends and talk show hosts alike, denied time and again that the film was even remotely autobiographical. Unsurprisingly, no one really took his word for it. Life gives birth to art, after all.

The stories of Orson Welles and Jake Hannaford are inseparable. Both are about age and decay, and show that, in time, even the tallest of giants fall.

At its core, The Wind explores Hannaford’s relationship with the two most important young men in his life: director Brooks Otterlake and actor John Dale.

Otterlake represents the threatening future. His character is not on only based on, but also played by one of Welles’ closest friends and disciples, Peter Bogdanovich. A one-time film-critic, Bogdanovich did not begin making movies until Welles encouraged him to do so. But when he did, he quickly became one of the brightest-burning flames of New Hollywood. 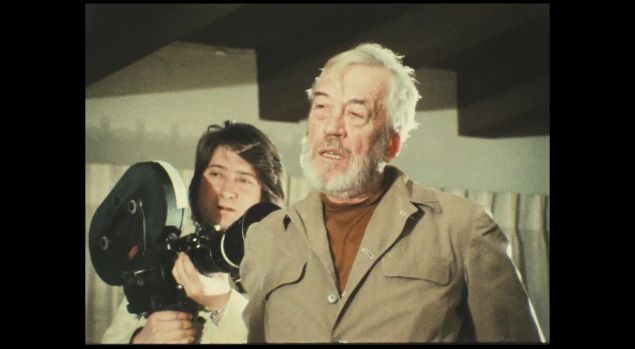 John Huston in The Other Side of the Wind. Netflix

Bogdanovich, the documentary tells us, loved and respected Orson, and went to great lengths to help his mentor finish his beloved film. But the two eventually broke apart for good, due to differences in their success.

The relationship between Hannaford and Otterlake is strikingly similar, though it’s in a much earlier stage than where Welles and Bogdanovich were while filming. Throughout The Wind, we come to understand that Otterlake, Hannaford’s trusted student, doesn’t stay by his teacher’s side out of respect, but out of guilt and a feeling of indebtedness.

John Dale (Bob Random), the boyish, effeminate lead of Hannaford’s film-within-a-film, represents the forlorn past. This film, devoid of plot and dialogue, follows Dale’s pursuit of and subsequent castration by a mysterious woman. Hannaford’s film was described by Welles as the character’s experiment in atmospheric cinema, a movement in film that was popular amongst the younger generations. 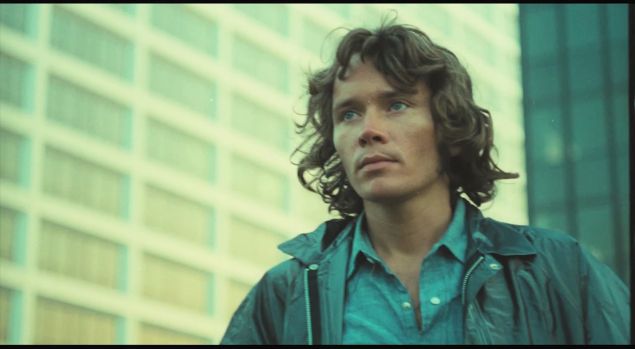 Bob Random in The Other Side of the Wind. Netflix

In 1961, Welles explained in an interview that Dale symbolized the director’s “own dream of himself.” With this in mind, we would do well to recall that Welles started out an actor himself, and note that the woman Dale pursues is played by none other than Croatian actress Oja Kodar, Welles’ own mistress.

The film at the center of this movie is highly abstract, and therefore open to many different interpretations. Just one of them is that Dale’s castration is meant to reflect that cinema, the medium that once put Welles on top of the world, was the same medium that took him back down.

They’ll Love Me When I’m Dead relates the insanity of one of the longest development hells in cinematic history. From lead actors leaving the film in the middle of their contracts, to the final cut being confiscated by the Ayatollah regime of Iran, it’s a miracle that this movie finally came to see the light of day.

The two films, both available on Netflix, stand as evidence of Welles’ lifelong effort to outperform himself; whether he failed or succeeded, The Other Side of the Wind and They’ll Love Me When I’m Dead testify to the achievement in that effort. 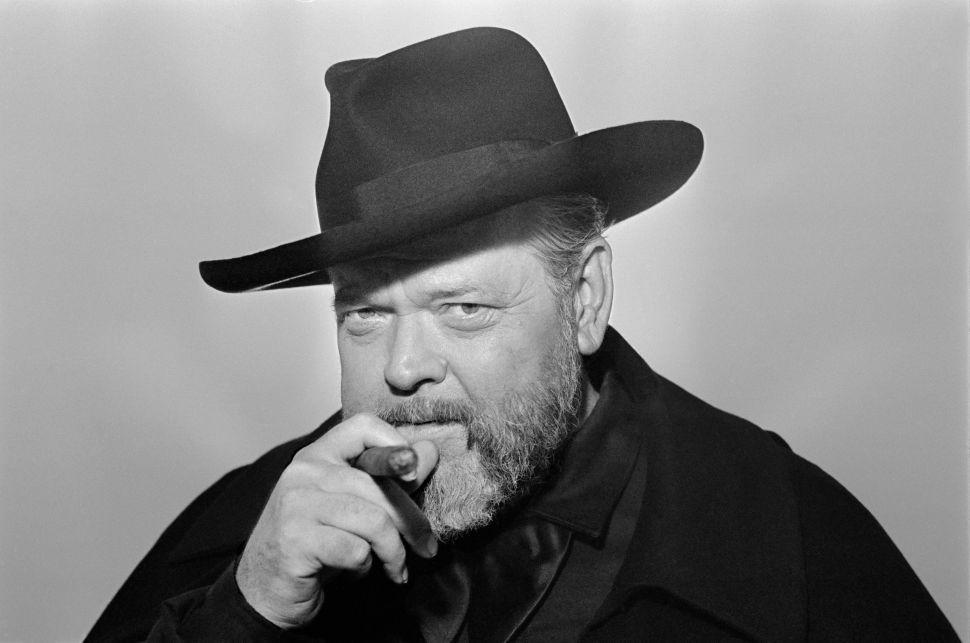