New York is the biggest city in America. 8.5 million people live in five boroughs on more than 6,000 miles of streets. Matt Green has walked them all. It took him six years to do it. According to The World Before Your Feet, the fascinating documentary about his journey from the bright lights of Broadway to the beaches of Coney Island to the hidden vegetable gardens of the South Bronx, he may not be finished yet. Along the way, he takes us on a tour of leafy trees, chirping birds and neighborhood saloons unlike any we’ve taken before or will ever take again. New York, New York, it’s a wonderful town. This movie proves it like none other.

Exploring the parks and cemeteries and historic monuments of the city is something I’ve always wanted to do myself, but never had the time, energy or freedom. Green surrendered those concerns long ago. He has no overhead, no expenses and no responsibilities. Once a well-paid engineer, he saved his money, quit his job, and spent the last decade seeking adventure. Before he landed in New York, he walked from the East Coast to Oregon.

Now New York is all he needs to keep himself interested in life. He has no apartment, pays no rent, and depends on the kindness of strangers, staying wherever friendly people offer him a room, a bed, or a meal. Sometimes his hosts contact him through his blog. Others offer him room and board in exchange for pet sitting their dogs and cats. It’s not entirely clear what he intends to prove wearing out so much shoe leather. “I don’t entirely know the point of it all,” he says. “I’m sort of learning that as I go along.” But investigating every street in New York fulfills a deep desire and makes him feel important in some intangible way he can’t explain. How many people can say that?

What he discovers on a daily basis makes for a lasting visual experience he shares with boundless enthusiasm.  New York is a city of constant change and revelation. There’s something around every corner. He walks across every bridge and through every tunnel, visits synagogues and Baptist churches, uncovers history perusing architectural marvels and samples a wide variety of people from every walk of life. Everyone is just as fascinated by what he’s doing as he appears to be about them. Street rappers, curious children, construction workers, fortune tellers, everyone has a question for Matt Green. “Are you independently wealthy?” asks a man in a truck on a deserted road in the wastes of Staten Island. “No,” he answers, “I’m independently homeless.”

It’s amazing how little New Yorkers know about the city they live in. You get to know the neighborhoods where you pray, shop, eat, visit your doctors and dentists and dry cleaners. The neighborhoods you don’t live in become irrelevant. In The World Before Your Feet you experience them all. Near Wall Street, he finds the city’s original slave market. Wandering through the city’s sprawling cemeteries, he finds the graves of Alexander Hamilton, Jackie Robinson, Harry Houdini, Emma Lazarus, who wrote the poem on the Statue of Liberty (“Give me your tired, your poor, Your huddled masses…”). In the concrete canyons of Queens and the Bronx, he finds grape vines, fig trees and flowers. In Brooklyn, a California redwood tree. Luckily, he has never been mugged, threatened, or in danger. When things get anxious, there’s always somebody with a bathroom.

At one point, Green returns to his home town in Virginia for a brief visit with his parents—nice people who confess this is not the life they would have chosen for their son, but content in the knowledge that he is happy doing exactly what he’s doing even though he doesn’t make a dime doing it. The rest of us have good reason to be happy, too. Directed, photographed and edited by Jeremy Workman, the passionate guided tour of New York called The World Before Your Feet allows us to see things, learn things and see a side of life right under our noses we never knew existed. It’s an eye-opener—and darn good entertainment, too. 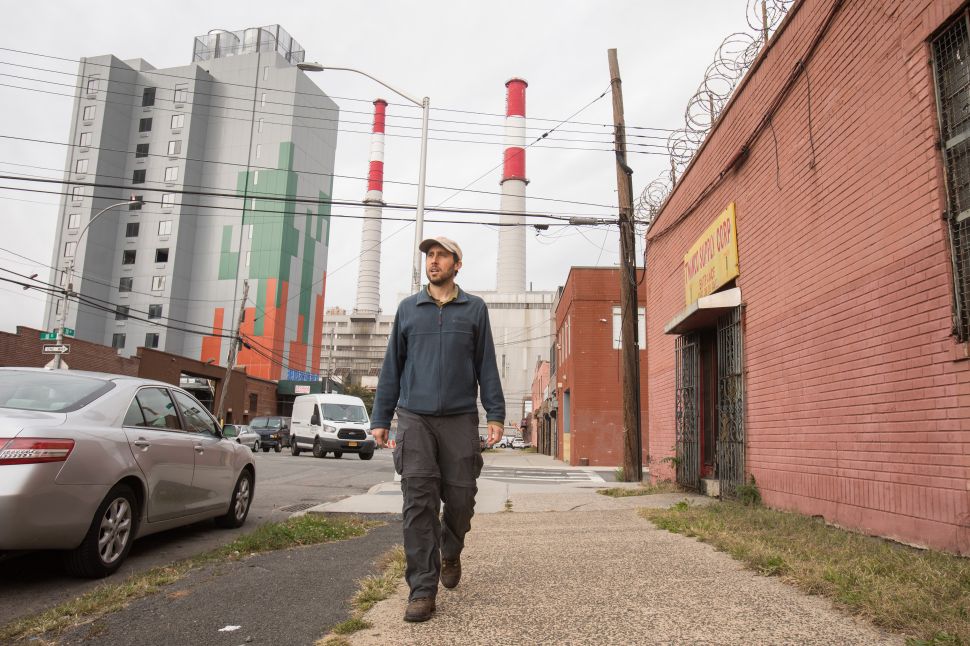