Cryptocurrency investing in 2018 has often been terrifying. As of this week, Bitcoin has fallen more than 80 percent from its December 2017 peak of $19,000. Its Thanksgiving weekend plunge wiped out 40 percent of Bitcoin’s dollar value in four days. But those free-falls have yet to deter some of crypto’s firmest believers.

One of the most prominent bulls in this bunch is venture capitalist Tim Draper, a third-generation startup investor who has discovered many companies that have become today’s household names, for reasons both good (Robinhood) and Theranos (Theranos).

In the crypto world, Draper’s best known for accurately predicting that Bitcoin would reach $10,000 by end of 2017, way back in 2014. And, despite Bitcoin’s turmoil over the past year, Draper is now looking for Bitcoin to cross $250,000 by 2022, or 2023 at the latest, according to a recent interview with investor Mike Green (who manages Peter Thiel’s personal assets) on financial news site Real Vision.

The big assumption behind his sky-high price target is that Bitcoin alone will replace about six percent, or $5.2 trillion, of the total $84 trillion in government-backed (fiat) currencies in circulation today. Dividing that figure by 21 million Bitcoins—the total number that can be mined, which was set forth by its creator—each Bitcoin will come out worth roughly $250,000.

And that will happen as soon as people start treating Bitcoin as a real currency, rather than an idle investment product they buy with dollars.

“I think a lot of [Bitcoin-related] technologies are coming to the fore. It will take a little while for people to start using them… It will be in that range [2022 to 2023] when people [will] start to be able to spend it and invest it as easily as they do dollars now,” Draper told Green during the interview. “As soon as that happens, there’s going to be a huge shift, because who is going to want to hold onto political money when you can hold on to real crypto money?”

To that end, Draper has two main arguments: Bitcoin is more stable in times of political turbulence than government-issued money; and blockchain is more secure than a bank.

It’s true that Bitcoin’s value in dollar terms has been extremely volatile since its creation, rising tenfold within six months in 2017 and losing half of that value just as quickly. However, few people in the U.S. are aware that many non-dollar fiat currencies have actually done worse.

“I have a friend from Argentina who said, ‘My family’s fortune has disappeared three times in my life, and I’m only 30 years old,'” Draper said. “So, for every decade, Argentina had some currency manipulation, government disasters, hyperinflation or whatever that forced its currency into a downward spiral. But, when he looks at Bitcoin, he’d think, ‘Volatility is nothing compared to [the] Argentine peso.’ And crypto is generally volatile upward, whereas political currencies are always volatile downward.” (Despite Bitcoin’s recent newsworthy plunges, over the long term, it has actually appreciated over 20 times since its creation in 2014.)

Not to mention Bitcoin’s immunity to cyber attacks by design. “You know that your bank is being hacked all the time, right? But the blockchain for Bitcoin has never been hacked,” Draper said. “So, when I look at my Bitcoin versus my dollars, my Bitcoin is more secure than my dollars, because my dollars are in a bank that is constantly being hacked.”

While blockchain itself is (seemingly, at-this-particular-moment) hack-proof, there have been cases of hackers looting cryptocurrencies off of major exchanges by stealing users’ login information.

“The world where crypto is everywhere is a much better world,” Draper concluded. “And I would say the best way to participate is just go get a Bitcoin wallet and get that feeling of downloading your Bitcoin onto the ledger.”

“Here,” he pointed at a hypothetical smartphone in his right hand. “That’s my money, and it’s a whole new way. You do it once, and you go, ‘Oh my gosh! I’m looking at the future of money.'”

Draper said his short-term goal is to raise an all-Bitcoin venture capital fund, in which every investment, every profit payout and every paycheck to employees is transacted using Bitcoin with zero accounting fee. But for now, the technology unfortunately is still not there. “You know, I was trying to do this with my venture fund recently. Turns out it’s still very complicated because we would have to convert Bitcoin to dollar, and dollar to Bitcoin and all that,” he said. 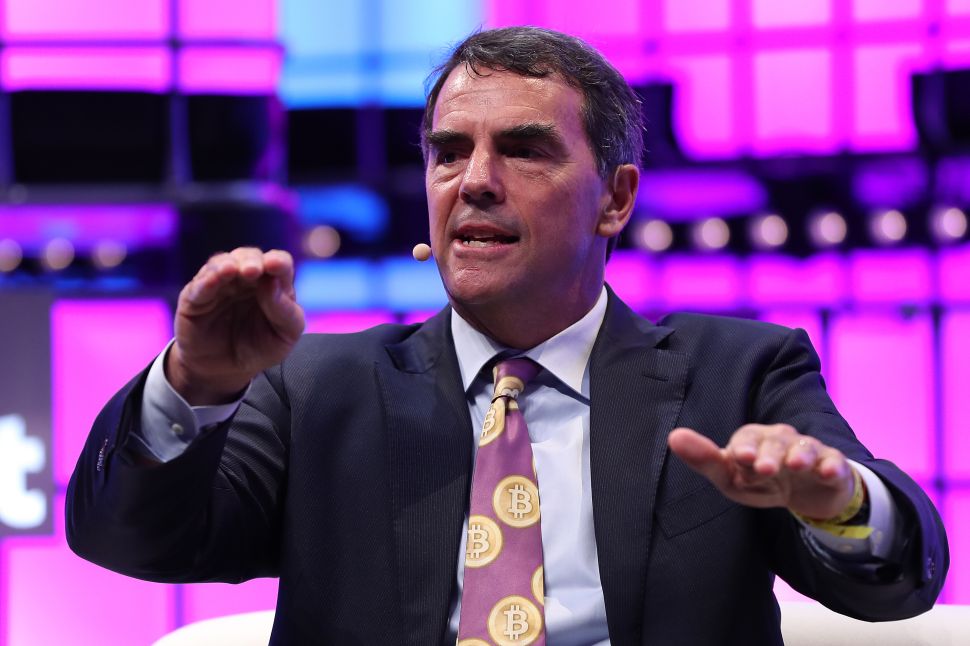