One of the most famous artists alive, and widely considered a key figure in the reemergence of painting in the 1990s, Luc Tuymans is practically a walking institution in Europe. In the United States too he has made his mark. He was one of David Zwirner’s first artists when the dealer opened his blue chip operation in New York, and the two were instrumental in the other’s success.

His works fetch tremendous prices both at auction and off gallery walls. But for his latest show, “Sanguine: Luc Tuymans on Baroque” at Milan’s illustrious Fondazione Prada, Tuymans is showing only one painting of his own. His main gig here is as curator, having organized an exhibition combining Baroque masterpieces with contemporary artworks. The show, as Tuymans told Observer, is full of juxtapositions, focusing on dissonant, beautiful portrayals of violence and mortality.

As with much of Tuymans’ oeuvre, this exhibition is political. Contemporary pieces by Kerry James Marshall and On Kawara hang next to the 16th and 17th century masterpieces by Caravaggio and Peter Paul Rubens to create conversations across time about western image making, propaganda and globalism. Meanwhile, elements from the past appear quite changed in the context of our post-truth era and the new rise of right-wing populism. Beyond his art and curatorial efforts, Tuymans isn’t shy about speaking publicly on political matters, either. He talked to Observer about feeling Steve Bannon’s presence in Europe, and how we got to a place of Brexit and Donald Trump.

Tuymans: I came up with the idea to [show] two poignant works: Edward Kienholz’s Five Car Stud, shown here in the form of a film, [and] Caravaggio’s David with the Head of Goliath, from 1610, the last self-portrait he made, where his head has been cut off. They are two elements of extreme violence, extreme contrast and of schisms. In between I would make a constellation of contemporary art, because I also think we live in a time of schisms.

This is a European show in Europe, which is now sort of in shambles because Steve Bannon is already here, so to speak. Then of course you have what’s happening in the United States and the entire West. There were two things that I foresaw: Brexit and Trump—I also think the guy will be reelected. You have an element of protectionism [now], which was actually downloaded immediately after 9/11. The world changed. Two other major mishaps in this whole political story are the first and second Gulf Wars. So we have the extreme migrant crisis.

It is therefore interesting to counter this element with the idea of culture—with another form of populism that was actually based on broadening the horizons instead of narrowing them. So this show is a sheer juxtaposition.

What do you think about artists throughout history wrestling with this idea of capital “T” truth and, all of a sudden, living in a time where truth is actually perceived as subjective and flexible, but in a very negative and dangerous way? Artists have always been playing with the truth—I’m thinking of Baroque works that were total propaganda during reformation or David’s invented images that he painted to add to the aura of Napoleon.

Yes. The baroque was first an element of propaganda. When Bernini finished the Colonnade [in St. Peter’s Square at the Vatican], it was the first time the word propaganda was brought up, because it is the embrace, through the form of architecture and sculpture, of the masses. People like Rubens were completely subscribed to the program. It was the first idea of western image building that was propelled from here all the way to South America. Therefore you have Javier Téllez [from Venezuela] in the show, you have Pascale Marthine Tayou [from Cameroon].

And of course in shrill contrast, to stay in the time period, look at the two personalities of Rubens and Caravaggio. Rubens was always famous. He remained famous throughout his life. He worked with the studio. He has numerous amounts of assistants. PR didn’t exist but he would have invented it. So this is the first idea of western image building, so to speak. In contrast with Caravaggio—who killed a guy, who was working alone and was actually on the run—the impact of both is completely different. [Rubens] subscribes to the system, working mostly for the Spanish court but nevertheless within the idea of the counter-reformation.

Caravaggio, also working under the framework of the pope and the papal forces, was in the end disregarded because of the murder, nearly excommunicated and on the run. But he also got away with an imagery that was extremely modern, and remains so to this day. For the same reasons, they had to be appalling, they had to have impact. But both deal with the idea of ultimate violence. Baroque was never envisioned as a transitional period in art up until the 19th century. It was rather seen as a negative, as overkill or overload.

Can you talk about that transition from the invention of PR in the baroque period to now, where it seems like we’re rediscovering propaganda?

I think now we are actually living in a period of extreme forgetfulness—the opposite of information. [Baroque] was misinformation but with a specific agenda, most of the time a religious one. But it was also geopolitical. Don’t forget that as this was happening the world was rapidly expanding. It was also the heyday of the western image, which is now in ultimate decline.

So we’re living the inverse. This could be an inverse image of all the possibilities, including all the illusionism, like the images of Mark Manders’ sculptures that look like clay but are actually bronze. They are also twisted and cut in half. Or the work of Carla Arocha and Stéphane Schraenen that reflects but also deflects and sort of disperses all the imagery, and sucks it in and throws it out at the same time. They all play with this idea of what can be seen as real or what can be an illusion.

Moving away from politics, if I’m not mistaken, your first exhibition was staged inside an empty swimming pool. I want to ask you about the way that your practice has always been curatorial, and this sort of need to create an atmosphere or an aura.

There is a sort of link [between curating and painting] because if I curate there is a specific choice, and that choice will not be overly positive. It will go to a darker segment, which I think is more interesting, for example, the work of Pierre Huyghe in this show, Untitled (Human Mask), which deals with this situation of aberration with this monkey wearing a mask, but also in a very specific place—where a tsunami happened, where the monkey is disoriented. You see an existential crisis with the monkey running around, but it becomes extremely human through the simulation, which is shocking to most people. In my work, there is an undertow and situation where violence is immanent—or revenge, to be honest. In that sense, these things are powerful motors in terms of what the visual actually can do. There will always be this element of, not a subliminal message, but the understatement that runs throughout.

Now, my very first show in this swimming pool was of course not that clear. But it was the first time my works got out of my very small studio and it was very important for me to see them displaced and confronting quite a radical architecture because it was a pool from the 1930s, so it wasn’t like a white cube or anything. So the works would have to go in to a specific dialogue. Although nobody came except my parents and some friends—my mother started to cry. When I was on the balcony looking into the pool I said, “It’s going to be fine,” because I understood that the work could take on the space and I saw it for the first time.

“Sanguine: Luc Tuymans on Baroque” is open through February 25, 2019, at Fondazione Prada. 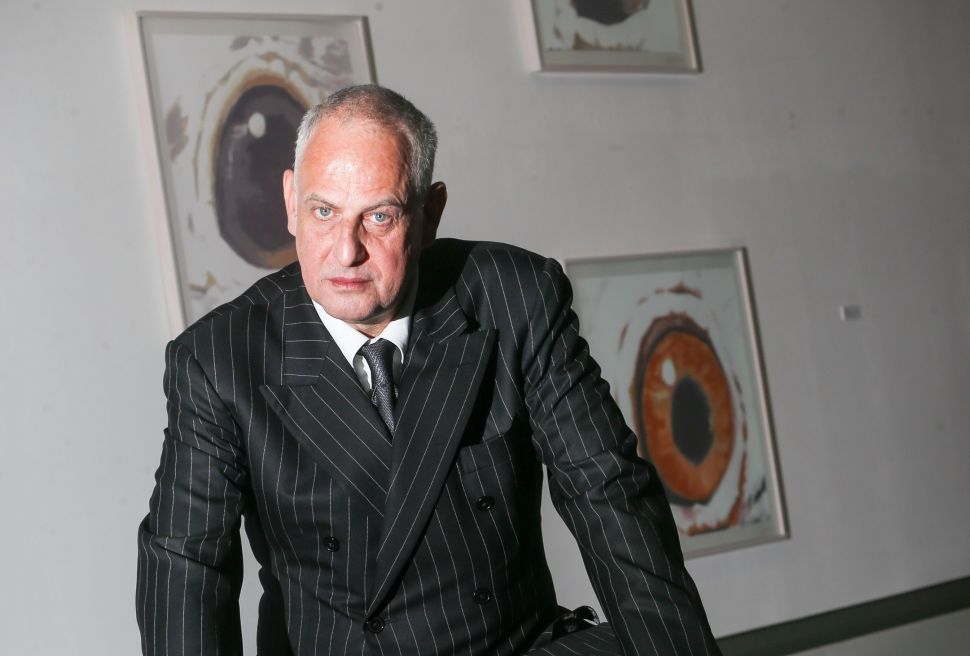