As the holiday season approaches, it seems the entire universe gets swept up in the blessed spirit of the Lifetime network. Even classical music chimes in, with dance companies offering new and mostly old takes on the Nutcracker, and symphony orchestras lining up to celebrate the Messiah.

Opera companies get into the act too, though not so unanimously: the Met, for instance, alternates year by year with either The Magic Flute or Hansel and Gretel, thus equitably saluting the Yuletide values of Freemasonry and cannibalism. A bit more to the point is Gian Carlo Menotti’s 1951 television opera Amahl and the Night Visitors, which just enjoyed a satisfyingly relevant production by On Site Opera this past weekend.

As its name indicates, this company eschews traditional operatic performing spaces for, well, all sort of odd places: Mozart’s The Secret Gardener in an Upper West Side community garden, for instance. With this Amahl, though, On Site has hit upon a work/venue combination that is not only imaginative but politically resonant.

The piece tells of a poor family, a suspicious mother and her trusting disabled son, who welcome the Magi into their home as a respite in their trek to present gifts to the Christ Child. Amahl, too, wishes to give, offering his only possession, his crutch. Suddenly the boy can walk unaided and he joins the Magi on their quest.

Director Eric Einhorn tactfully transposes this action to the present, imagining the family sleeping alone in a shelter, only to be interrupted by three eccentric “Magi” who might well be homeless men. A subtle layer of subtext is that the healing of Amahl’s disability, which two millennia ago would have required divine intervention, in 2018 requires no more than a properly functioning health care system.

The central character of the Mother, whose dramatic arc is a gentle variation on the Scrooge trope, here was sung with radiant vocal glamour by soprano Aundi Marie Moore. Her repeated cries of “He walks!” at the climax of the piece gradually rose in intensity until the interior of Holy Apostles Soup Kitchen vibrated like a great bell.

In Saturday evening’s performance, Amahl was Luciano Pantano, whose boy soprano was just a trifle light for the space, but who sang with an accuracy and musicality that would become artists old enough to be his parents. His snaggle-toothed smile was so winningly sly you could easily accept the denouement in which he joined the Magi on their journey up Ninth Avenue. (I guessed he might walk them as far as, say, Columbus Circle, and then catch the A back downtown.)

Conductor Geoffrey McDonald did his customary witchcraft in creating an ensemble with a tiny orchestra off to one side of the performers.

But the most moving element of all was the chorus, assembled from vocalists who have experienced homelessness, creating a mighty noise from a group as diverse as New York City itself.

And that’s where this stunning take on Amahl needs to become a new Christmas tradition, each year reminding us of the miracle that is our community. 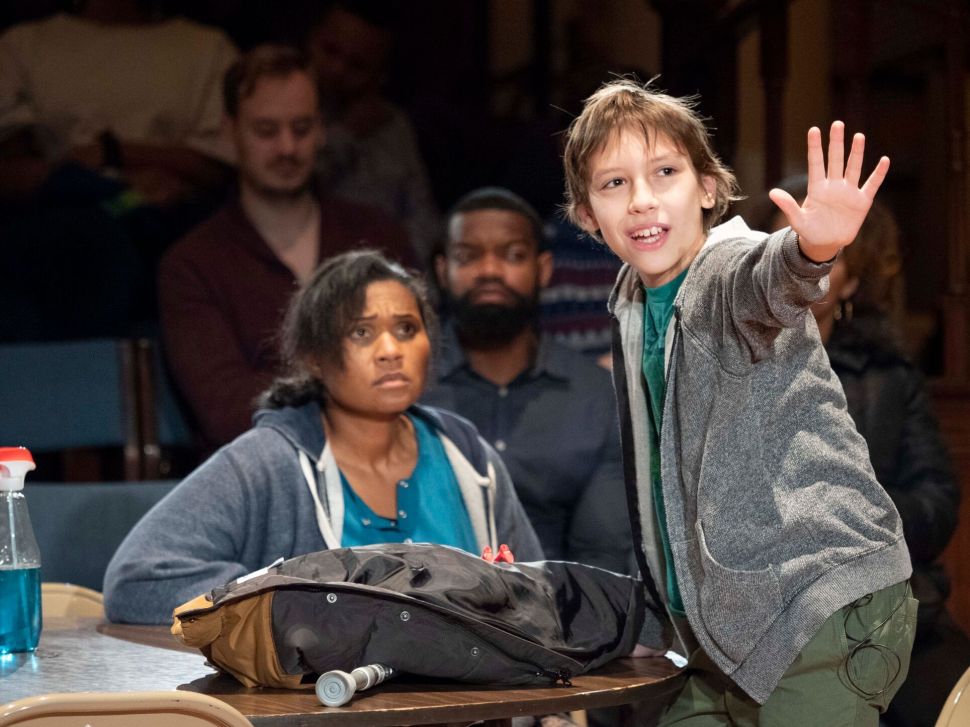