Last month, I toured Tokyo with my parents. It was the first time they’d been to one of the world’s most interesting cities, but my mom couldn’t stop focusing on one thing: why Japan is still rife with bustling arcades.

“I remember when you were young,” she reminded me every time we saw a Sega Center or Konami Tower. “I’d give you $5 and you’d head to the arcade and play games until the quarters ran out. There were arcades in every shopping center. And then, just like that, they all closed.”

Why do arcades still thrive in Japan when they have all but vanished in America? What we have are mere remnants: kitschy theme parks in which arcade games are a diversion rather than an attraction. Dave & Buster’s and Chuck E. Cheese’s placate parents with happy-hour specials as children engage in game prize micro-economies. Boozy spots like Barcade and Ground Kontrol dole out hipster-friendly nostalgia, with retro video game cabinets serving more as Instagram fodder than the main attraction.

But let’s be clear: those are restaurants and bars with video game consoles. Not arcades.

Some blame the massive home video game console industry as a good reason for the demise of the American arcade. James Mattone, who has covered the video game industry for years, agrees. “Games became more accessible to households,” he told me, “which removed the need to go out and play those games in arcades. Why should I spend my quarters at an arcade, when I can use them for ordering pizza for a night in?”

It makes sense, too. Millions of Americans own video game consoles (according to Nielsen, 162 million U.S. TV households, or roughly half the U.S. population, own gaming hardware); eSports—competitive, organized gaming that is watched and followed by millions of fans all over the world—has become a lucrative market with revenue expected to surpass $1 billion in 2019; and streaming services, such as Twitch, which has 15 million daily active viewers, allow spectators to watch their favorite eSports players in real time from the comfort of their own screens. Given that, there’s little reason for gamers to leave their homes when they want to kill some aliens (or even just watch other players own some n00bs).

So how do you explain the arcade’s persistence in Japan? I headed to one: a Sega Center in bustling Shibuya, Tokyo. It’s an area filled with bars, restaurants, shopping centers, nightclubs, karaoke parlors, ramen counters—and arcades. The average age of the Shibuya visitor is somewhere around 25—old enough to drink, young enough to be up to speed on the latest video games.

The arcades of Japan are multi-floor complexes (often taking up entire buildings), split into sections by game types. On the ground level, you usually have physically demanding games that draw crowds of onlookers, like music rhythm games where dancers in street garb hop on lit-up floor pads and focused percussionists bang drums in time to a blaring sound system.

Nearby, dozens of “UFO games”—those in which a player attempts to grab an expensive prize with a weak robotic claw—tease players with almost-gets of everything from cheap toys to live lobsters. Players who fail too many times or are trying to cheer up a sad child can ask arcade attendants to rearrange the prizes as a bit of a cheat. It’s a scene you would never see in America, one where the house actually wants its patrons to win.

Another floor is often a maze of multi-player games, cubicle farms of people playing virtual horse racing or epic medieval battle simulators. These players invest hours into their characters, carrying them on account cards like a platinum AMEX. Online tournaments track the rankings for years; top players are revered celebrities, their favorite arcades well-known to those in the know.

Other floors include massive simulators like “Densha de Go!”—an intricate, hyper-realistic train simulator that includes an entire engineer cockpit, multiple monitors and actual train routes. Upon seeing the game, my stepfather stopped dead in his tracks and watched a player meander from station to station, fascinated not just by the intricacy of the game, but also by the over-the-top design of the game cabinet itself.

We then wandered to the top floor, which on first inspection looked like a place where gamers go to redeem points for prizes, not unlike a Dave & Buster’s. But a dense throng of gamers were pressed against a pair of closed doors—ignoring the prizes and lone clerk—waiting for something to be revealed. We waited along with them, unsure of what was to come and afraid to ask, but certain that whatever was happening would at least be interesting.

After a few minutes, the doors opened inward to reveal a lavalier-mic’d host standing in front of a shiny pair of new game cabinets. The crowd gasped, shouted in gleeful unison and then applauded. The host yelled out new features, each one receiving exponential approval. The event looked more like a new model reveal at a car show than anything else.

Out on the bright, hot streets of Tokyo, it hit me: the reason arcades persist in Japan is because they’re destinations. They reward players for making the trip—whether it’s with a shiny new toy, access to expensive simulator equipment or fan-service cabinet reveals. There’s an air of enthusiasm to arcades in Japan, much like college football in America. The more you know, the more you’re rewarded, the more you want to return.

That all made sense, but it still didn’t answer my mother’s question. But it’s completely possible that the reason arcades died in the U.S. is the very same reason arcades did so well in America during the ’80s. Arcades were dark, dingy affairs. They were places teenagers showed off their Pac-Mac prowess, but mostly snuck away from their parents, got into teenage fights, maybe made out a bit. They were never 100 percent about the games. Today, teenagers turn to social media from their smartphones. They turn to online gaming from their computers and PlayStations. They socialize without leaving their homes. The old ideal of the American arcade serves little purpose in today’s teenagers’ daily need for social interaction.

You only need to look at the way arcades have been portrayed in American film to understand their ephemeral place in culture. In Karate Kid, Daniel LaRusso’s trip to the arcade was a date, his focus on the girl. The games? They were a diversion, no more important than the bumper cars or mini golf.

On the other side of the arcade token, we have Tron, a glimpse of the American arcade’s brightest moment. Flynn’s Arcade looks more like a nightclub, well-lit and teeming with beautiful people, as a gaggle of impressed onlookers watch Jeff Bridges hit a high score.

The scene was filmed in a real arcade in Culver City, Los Angeles. It closed years ago as the arcade industry in America fizzled out. Today, that arcade is a restaurant called Akasha that serves $20 grass-fed burgers. (Oddly, I’ve actually been—it’s good!)

But that’s just it: Americans don’t see arcades as destinations. The closest we get is Dave & Buster’s and let’s be real: we don’t go there for the games. We go there for the cheap drinks and because it keeps our kids occupied.

And perhaps that’s why Barcade and Ground Kontrol are a thing. The same people who grubbed quarters from their moms decades ago want another shot at a high score on Dig Dug. And while their success is promising, it’s also important to note that these liquored up quasi-arcades gaining in popularity across the U.S. focus on the classics. You’ll find Asteroids and Pac-Man, but you won’t find anything like the intricate, over-the-top marvels (i.e., the aforementioned “Densha de Go!” train simulator) gracing the multi-story game centers of Japan.

Loading up on beer for the weekend! #Barcade #brooklyn

Nostalgia can only get you so far; in fact, it’s really just another distraction for those old enough to remember America’s arcade glory days. And that’s the exact opposite of what makes Japanese arcades so special with their flashy new games, surprise reveals and enthusiastic spectators. Yes, America’s arcades are dead, but arcade culture lives on… you just have to travel to Japan (parental tagalongs not required) to see it. 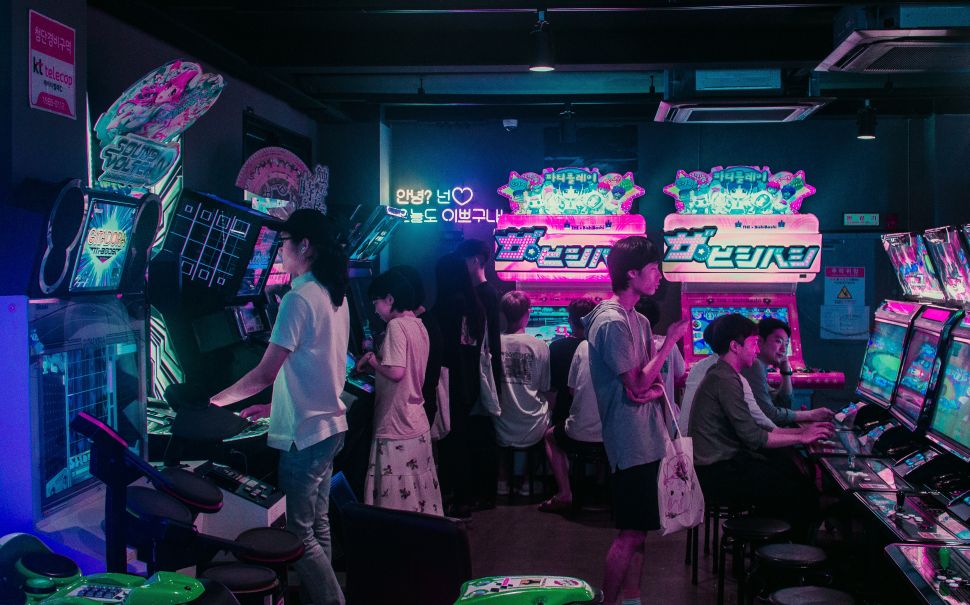