It’s that time again. You know, when everyone releases their “Best of” TV rankings, subsequently turning Twitter into a war zone of vitriolic debates and surprisingly clever insults. Consider it a time-honored tradition!

But since rankings are reductive and subjective, and we’re not really in the mood to fight this year, we’re taking a different approach. Instead of scrutinizing 2018’s endless array of television offerings, we’re taking a look back at 12 great shows—listed in no particular order—and explaining why they’re especially great for binge-watching. Considering the end of December is basically a barren TV wasteland mostly inhabited by reruns and Love Actually marathons, now’s the perfect time to catch up on these addictive gems.

You know a show is special when it takes a slight step down from its previous unimaginable highs yet remains one of the most purely enjoyable things on television. That’s the case with NBC’s The Good Place, which we’ve earmarked as the spiritual successor to the unconventional Community. Michael Shur’s series manages to whip punch lines at you at a frenetic pace—pun lovers, come and get it—while baking in some moral philosophy for good measure. It’s tirelessly clever and sweet, and Ted Danson is an absolute scene-stealer. Seriously, that dude in a bow tie is a MOOD.

The high-concept comedy follows four people and their otherworldly frenemy as they struggle in the afterlife to define what it means to be good. The best reason to binge-watch it? Its short and punchy 22-minute episodes. Your butt will not have time to fall asleep. So have at it, couch potatoes.

We have a confession to make: We’re very upset with you. Yes, you. The average TV viewer largely tuned out for The Americans’ sixth-season run, giving it perpetually low ratings. No kulich for you.

Honestly, it may be the most criminally underrated series of 2019. After following its two deep-cover Soviet spies at the height of the Cold War as they posed as your average American couple and started a family, the show sadly wrapped earlier this year in an impressive fashion. Finales are often tough to nail and even more often underwhelming, but The Americans signed off on a pitch-perfect note that brought its characters full circle. Aside from its table-setting penultimate season, it is that rare drama that improved with each new installment. Its narrative was constantly in motion, making it increasingly rewarding and dangerously bingeable.

The Breaking Bad prequel spin-off couldn’t be more different than its celebrated predecessor. If the former built to explosive crescendoes, the latter is content to play a steady and quiet rhythm. The greatest testament to the show’s power is that despite knowing the ultimate fate of Jimmy McGill, a.k.a. Saul Goodman (Bob Odenkirk), we’re still captivated by his meandering path and continual struggles.

So why is it binge-worthy? Well, shared cinematic world-building is all the rage these days, and it’s very likely that Saul will show up in the forthcoming Breaking Bad TV movie. Don’t you want to be clued in to everything there is to know about this drug-addled universe before that?

Atlanta is arguably the best show on television, so if you’re not tuning in, you’re doing TV wrong.

In its second season, creator and star Donald Glover made the surprising decision to nudge his character to the background. This allowed brilliant supporting players like Brian Tyree Henry, Zazie Beetz and Lakeith Stanfield to shine in their own showcase episodes. Each chapter managed a careful balancing act between surrealist experimentation and poignant storytelling. When looked at holistically, Atlanta is a scattered collection of interconnected standalone vignettes that seem like they could leap off its axis entirely.

Who knew that television’s most thoughtful exploration of puberty and adolescence would arrive in an animated comedy that features a giant, hairy mythological hormone monster screaming sexual obscenities at children? Yet somehow Nick Kroll’s Big Mouth manages to make you laugh heartily while reflecting on the overwhelming awkwardness of growing up, gently reminding us that no one goes through it alone.

Through two seasons, Big Mouth has remained taut and vulgar, rarely letting up on the gas pedal. It’s a go-go-go propulsion of laughs that leaves no taboo stone unturned. And it’s a total breeze to bang out quickly.

The second season of Netflix’s GLOW may be the best season of original programming the streamer has released. Yeah, that’s right, we said it. Brimming with heart and humor, Season 2 builds on everything you enjoyed about the show’s rookie run while keeping things tight and fast-paced. It’s remarkably efficient at giving almost every character meaningful development, and doing so in entertaining ways that really hit home.

Though TV has made a lot of progress, we’re still not seeing enough diverse, female-fronted serialized dramedies. Thankfully, despite inexplicably poor ratings, Netflix has renewed GLOW for a third season. So go and support a deserving show.

One of the pluckiest series on television, Mrs. Maisel is a pure delight. It trails Miriam ‘Midge’ Maisel (Rachel Brosnahan), a housewife in the 1950s who decides to become a stand-up comic after her marriage and idyllic Manhattan life fall apart—but it does so much more than that.

But beyond the sheer positive force that is Midge Maisel, you should binge-watch this series to stay abreast of the pop culture conversation. The show won eight Emmys this past fall and will be a formidable contender in 2019. Fall behind, and we’re pretty sure no one will want to talk to you in the new year.

Amazon’s twisty paranoid thriller feels like a more focused version of Netflix’s Maniac, minus the surrealist elements (and we’re saying that as fans of Maniac). In it, Heidi (Julia Roberts) works at Homecoming, a facility helping soldiers transition to civilian life. Years later, she has started a new life, but when the Department of Defense questions why she left the program, she realizes there’s a whole other story behind the one she’s been telling herself.

We love this show mostly because of the way director Sam Esmail (Mr. Robot) upends traditional television norms. Homecoming is visually daring, but in a way that services the characters and plot rather than diverting attention away from the central elements (Maniac didn’t always succeed at this). It also doesn’t hurt that Roberts and her costar Stephan James go together like popcorn and butter.

But the best part? Homecoming is a half-hour drama in an era when it seems mandatory for every Serious Show to be stretched to 60 minutes or more. If you’re committed (and you will be), you can burn through this winner in two nights.

The Ringer’s Alison Herman said it best when she wrote, “Killing Eve demanded we pay attention, and in the deafening noise of Peak TV, that’s no easy feat.” The series sinks its fangs into your arteries and never relinquishes its bite as it unfurls the story of its titular heroine (Sandra Oh), a bored intelligence officer, and her frightening quarry Villanelle (Jodie Comer), a psychopathic assassin.

Are we crazy for thinking that Claire Foy (The Crown) may have robbed Oh of this year’s Best Actress Emmy? No, we’re not, because she was paramount to Killing Eve‘s success, and the show would not have worked without her central performance (though it pairs very nicely with the Comer’s unhinged portrayal of her foil). Better yet, it’s just eight episodes. That’s practically a warm-up lap for all of us who gorged the entire second season of Stranger Things in one sitting.

A depressed hitman moves to Los Angeles to become an actor—Barry could have milked its core concept for years and carved out a nice niche as an enjoyable, 30-minute fish-out-of- sitcom. But creators Bill Hader and Alec Berg aspired to more than cheap laughs; like the titular protagonist, they were searching for something of substance. Thus, Barry consistently improves as its first season turns darker and more macabre. One wouldn’t think that PTSD, murder and comedy could blend so well together, yet its thoughtful handling of each made it an unexpected success (the Chechens are particularly hilarious, as is Emmy winner Henry Winkler).

The first four episodes are decidedly lighter in tone and buoyed by an almost slapstick sensibility, but the second half takes a turn into more disturbing territory as it asks if any of us are capable of being more than we are. It offers a little bit of everything without being scattershot—which is why you should binge-watch it before Season 2 arrives next year.

As Observer’s entertainment contributor Lester Fabian Brathwaite wrote of BoJack Horseman, “It soars because of its eloquence, the way it articulates just how sad life can be while also displaying a masterful devotion to the art of comedy.”

Though BoJack began as a spoof of Hollywood and celebrity, it has always been anchored by its insight into the emptiness that accompanies fame. No, BoJack isn’t exactly Brad Pitt. He is a former child star—one who was very much washed-up before making his impressive comeback—and as the show’s seasons have unspooled, we’ve seen more and more how his formative years molded the cynical adult he is today. In this year’s fifth season, however, we saw just how much they’ve shattered him. He and his cohorts (in particular, the long-suffering feline Princess Carolyn, voiced by the always excellent Amy Sedaris) may be anthropomorphic animals, but they scan as some of the most relatable humans on television. Their stories of crushing loneliness are bingeable because it’s impossible not to invest in them.

First, the bad news. Castle Rock is often frustrating thanks to narrative misdirection that may or may not undermine the show’s conclusion. It’s also a densely packed Easter egg hunt that only the most devoted Stephen King fans will fully appreciate. Now, the good news. It’s a 10-episode anthology that’s easy to slip out of if you’re not feeling it. And at times, it will prove difficult not to connect with it.

The back half of Season 1 is a committed suspense-builder that inspires viewer theorizing and rabid binge-watching. However, it is Episode 7, “The Queen,” that remains Castle Rock‘s uncontested high point—and one of the very best slices of Peak TV this year. Hulu’s deep-dive mystery may sometimes test your patience, but it’ll be worth it for this painfully moving puzzle piece alone. 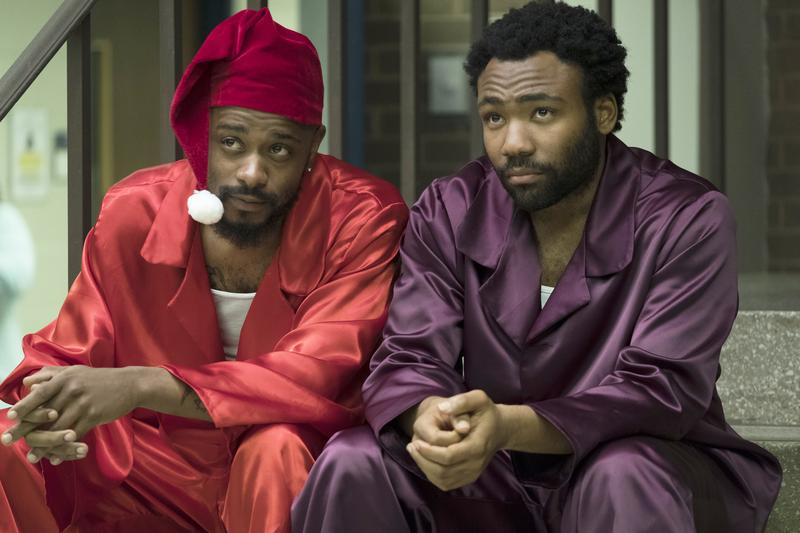