Like John Krasinski’s overrated horror film A Quiet Place, in which creatures invaded Earth after an apocalypse and killed off most of the inhabitants through a sense of sound, we now get Bird Box, in which more alien carnivores arrive after yet another apocalypse (gee, I think it only takes one) to kill off only people who can see. The only survivors are the folks who are blind or wearing blindfolds. Implausible even for an overly ambitious sci-fi monster flick, it also begs, borrows and steals every effect, idea and image from other people’s horror movies that were much better the first time around.

The only real shock in this one is that it stars Sandra Bullock, who should know better. On leave (temporarily, I hope) from hit movies as well as her senses, she plays a blindfolded woman called Malorie who, in the opening scene, drags two blindfolded children along a treacherous river to find an escape boat. If they see, she warns, they die. So the questions begin: what are they running away from? Where are they going? Why are they carrying a box containing five birds?

Every film star with millions of dollars who is tired of formulaic Hollywood crap seems to be searching for art, critical praise and self-respect. So they turn to foreign film directors who specialize in pretentious art films nobody will ever see. It proves to them they can act, gives them pride in their profession and reminds them they are still alive. It’s happened to Jane Fonda, Tom Cruise, Nicole Kidman, Julia Roberts, Brad Pitt…the list is long and lamentable. Add to it the very bankable Sandra Bullock.

The director is the Danish poseur Susanne Bier, who does not work well with plot, character development, pacing or continuity, especially in English (maybe the reason nobody in the cast comes off well is that they couldn’t understand the directions). At any rate, the movie lacks any kind of linear narrative sequencing, so you never know where you are or what year it is.

There is a clumsy flashback to five years earlier of a terrified, unmarried, pregnant Sandra Bullock on her way to a doctor’s appointment with her sister (a shamefully wasted Sarah Paulson) when the unexpected apocalypse (aren’t they always?) sends people in the streets into a panic that drives them to suicide. Another woman rushes to their aid but sees the monster and meets a ghastly end, leaving her husband (John Malkovich, who still sounds like a dial tone with a post-nasal drip, even when he’s in a rage) to pursue the hapless Bullock seeking revenge for his wife’s untimely death.

Meanwhile, the cliches multiply as Bird Box borrows and steals from the aforementioned deadly A Quiet Place, M. Night Shyamalan’s numbing The Happening, Dawn of the Dead, and others. Amazingly, the supermarket sequence from Stephen King’s The Mist has almost shamefully been lifted intact. Did none of those movies play in Denmark?

Another time warp and Malorie and the blindfolded children, who are called “boy” and “girl,” hide out in a mansion inhabited by other misguided and unfortunate actors including B.D. Wong, Jacki Weaver, Machine Gun Kelly and Tom Hollander. They prattle incessantly about how to replenish their food supply when they can’t see what they’re eating.

Oh, yes. The bird box. It seems that before people surrender to the suicide epidemic, they have to first see the monsters. The birds are the only things on Earth that can warn you when the creatures approach. Although the monsters are never shown—the idea being that if you see them, you go mad—my question is, so what? Who needs monsters to drive you over the edge of sanity, when all you have to do is watch Bird Box? 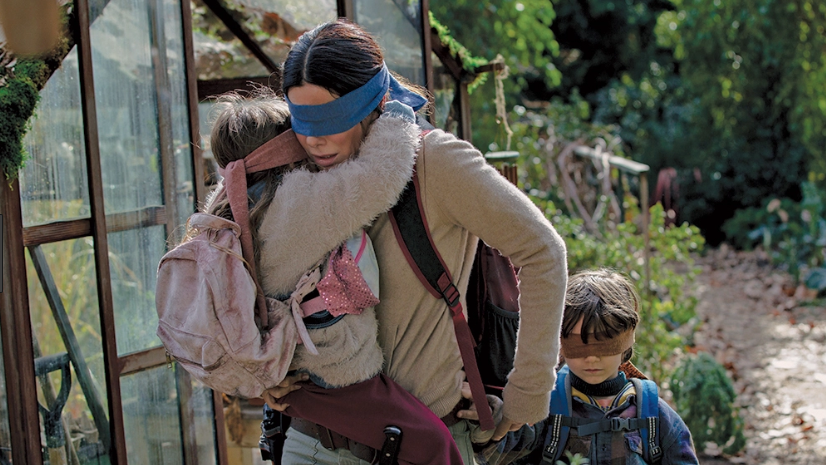