So much can change in four years. Just ask Bridget Everett, the downtown diva turned shit stirrer who has returned to Joe’s Pub for a handful of shows with her band, the Tender Moments, opening December 3. In 2014, while she was performing her sold-out Rock Bottom, the Chardonnay-loving, potty-mouthed chanteuse made the decision to quit her longtime job waiting tables uptown. Although among her fans, Everett was already a star, she knew it was a leap. “It was that New York mentality with the hustle,” she says. “I’m just always worried that I’m not going to make enough money to make things work, so I stayed there way too long.”

“It’s like when you get out of a bad relationship and you sort of open yourself up to love,” she continues. “I just started fully taking a chance on myself.” Now Everett is coming off a couple of very productive years: featured roles in the well-received indie films Patti Cake$ and Fun Mom Dinner, and a low-key comic turn in the Lena Dunham-produced HBO miniseries Camping. Everett plays Harry, the pistol-packing lesbian owner of a California resort ranch, in a cast that includes Jennifer Garner and David Tennant. And of course, there’s Everett’s ongoing collaboration with Amy Schumer, who gave the “Cabaret Hurricane” career-making airtime on her Comedy Central show, and still tours with her.

The movie and TV cash has allowed major life changes. After 17 years in a cramped two-bedroom on the Upper West Side, last year Everett moved to a roomy penthouse apartment (same neighborhood) where she can be a self-described recluse with her impossibly soft and serene Pomeranian, Poppy.

With Poppy by her side, she reclined on a faux-white-fur couch, sipping poached cranberries in soda (“with a li’l extra sumpin’”). On the wall, a neon sign spelled “POPPY” in glowing pink cursive. We talked about how letting it all hang out at Joe’s Pub with hard-rocking sex anthems like “Titties” and “Put Your Dick Away” have actually made her a shyer person.

Observer: I’m bingeing Camping. How was it shooting in the California desert?
Everett: It was roughing it. It was really hot. Super dusty. I snuck Poppy in there when I wasn’t doing a take. I was afraid that somebody was going to come and snatch her. But I had somebody on Poppy detail at all times. We had a snake wrangler.

I like your character, Harry. I want her to get a whole series.
There’s a lot of Murray Hill in Harry. [And] a lot of my friends, who are good people. Friendly, want to talk, want to be best friends with everybody. I’m a shut-in. I like to not talk to anyone.

So what the hell happens when you’re at Joe’s Pub?
It’s weird. I think the bigger and wilder all that became, the less I had to give, so I just stay home.

You sing about titties and dicks and you sit on a guy’s face. This is not a shy person.
Not in that context. But if I’m on an elevator I keep my earphones in at all times, I’m looking at the ground. I’m impenetrable. I go to happy hour by myself. Usually there’s a place down the road with dollar oysters and I go there at five, keep my headphones in, I order my oysters, I have my calamari, I have my couple cocktails, and I come home and sit on the couch.

Is there new material in “Bridget Everett and the Tender Moments” this December?
Yeah, there’s a new song that’s political but political in a Bridget way.

When you were starting out, was it a learning curve in terms of how far to push it with an audience?
Not really, because I started out in karaoke bars and I used to get on top of the bar and rip my shirt off and spit booze on people. So I just sort of translated that into cabaret. When you’re starting out in New York, you have to grab them by the balls and make them hear you.

When you flirt with people in the audience, is it ever a turn-on?
Not like a sexual turn-on. I see people come and they are like, “What the fuck is this?” Or they’re like, “Prove it to me, bitch” and just sort of sit there. Or I see somebody who probably sits at their desk and doesn’t really go off the rails. I love watching those people transform throughout a night. That’s the thrill.

You’ve done cabaret, films, TV. Where’s Bridget Over Broadway?
That’s why I moved to New York. But that schedule is so hardcore.

Eight shows a week.
When I was living with Mary Catherine Garrison and she was doing Assassins [in 2004], she was young and had lots of energy, but she would still just be so wiped out. I like to be in charge of my schedule. I’m used to being a hellion in charge of my own shit.

It’s an interesting time for identity politics and comedy.
That’s why I really want to perform at Joe’s right now. I’m going to Nashville this weekend and I’ve been doing some dates on the road with Amy Schumer, and those have been in sort of secondary markets, I guess you would call them. I just feel like I’m in more of a danger zone.

Do you ever censor yourself?
The thing about comedy or cabaret is: Sometimes you’re going to go too far. It’s like a stream of consciousness, you’re just trying to get to the thing that’s funny or entertaining or enlightening. And you might stumble and say the wrong thing. I might be talking to the most woke person I know, they might say something that’s fucked-up, it’s just part of a conversation. So if I say or do the wrong thing, I don’t want somebody to nail my dick to the wall and take away my Poppy.

Are you any closer to getting on a stage with Barry Manilow?
I’m doing everything I can, and I have exploited my relationship with Marc Shaiman and Scott Wittman, who know him, in a desperate attempt to try to somehow make my way to him, and I know it’s going to happen one day. That will be my first and last real day on earth. 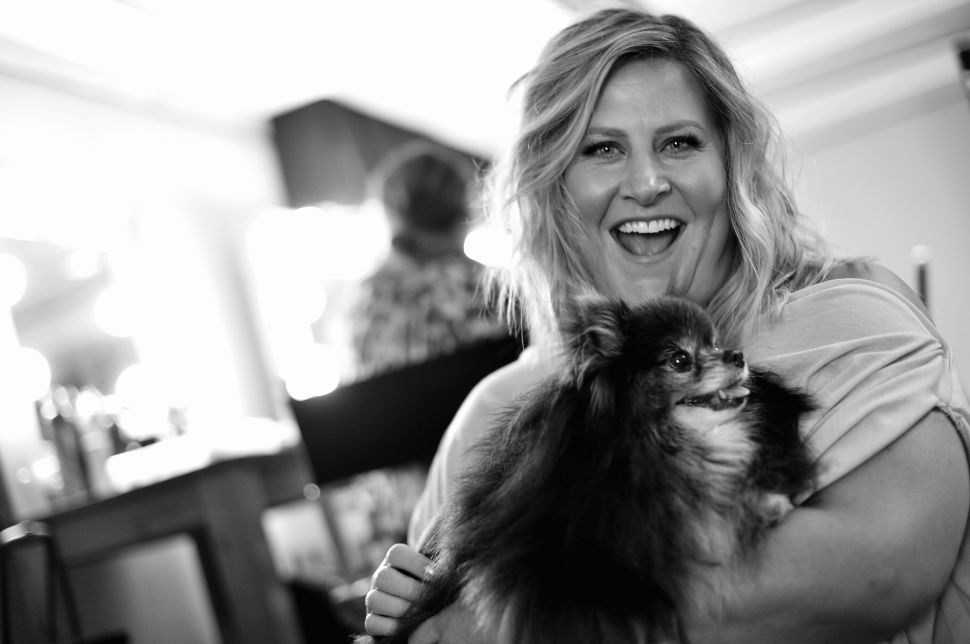