Surprise! Mortal Engines is one of 2018’s biggest box office flops. Universal’s tentpole project, directed by Lord of the Rings visual effects supervisor Christian Rivers and co-written and produced by fantasy heavyweight Peter Jackson, will be lucky to win back even half of its hefty $150 million budget. But we, the audience, are the real suckers, because this movie reaffirms a sad trend that’s been seeping into Hollywood. Fantasy, once such a thriving cinematic species, is now in danger of extinction, and even the credible talent behind it can’t save it.

Mortal Engines, like many other fantasy films, stems from ambitious source material. Based on the novel of the same name by Philip Reeve, the story takes place in a dystopian future when civilization, previously destroyed by nuclear war, has been rebuilt—on wheels. Huge “predator cities” scavenge the barren wasteland in search of smaller mobile settlements to absorb for fuel and resources. We follow Hester Shaw (Hera Hilmar), an orphaned teenager hell-bent on killing Thaddeus Valentine (Hugo Weaving), the de facto leader of one of the biggest predator cities in the world—London—in an attempt to avenge her mother’s death.

The premise sounds a bit goofy, but, rolling with it, Jackson and his crew find a way to make it work—well, at least visually. Diving right in, the film opens with a chase sequence featuring London and a small mining town. Watching a steaming, sprawling metropolis pursue this quaint little place like a lion hunts a gazelle, all while cutting back and forth between the daily lives of the people residing on these settlements, is nothing short of enthralling, but it’s the one and only well-oiled part of an otherwise defective machine.

The rest of the film falls flat, and that shouldn’t be a shocker. Jackson’s latest project suffers from the same ailments as his previous one, the infamously terrible Hobbit trilogy, as well as pretty much every fantasy movie that has come out in the past 15 years.

So what the hell is going on? Here are a few thoughts.

We’d be glaring dagger eyes too if we had to sit through this two-hour sludge-fest again. Universal

Characters carry a story. If they’re too weak to do so, everything collapses, and not even the most impressive special effects can prevent this. Granted, Mortal Engines deserves credit for not resorting to the tired old “chosen one” cliché. Hester isn’t special, and she does not strive to become something greater than herself. That would be fine—she’d at least be relatable—but the problem is that aside from her fiery desire for revenge, she doesn’t have much of a personality. The writers seem to know this, and they seem not to care, because they never give any of the characters room to breathe in between all the action.

This has become a common trope in modern fantasy: Characters are defined by a single special gimmick rather than by their emotions, feelings and backstories. M. Night Shyamalan’s 2006 Lady in the Water, for example, assigned each character a tic specific to them—stuttering, body building, etc.—but this just provided them with an air of verisimilitude. It didn’t make them real.

They gave us how much money? Well, in that case, why wouldn’t we have a fire-breathing mummy? Universal

Action in blockbusters keeps spreading like a virus. Nowadays, it takes up a disconcerting amount of these films’ running times. Sometimes it’s good, like when it moves the story forward and develops the characters (see: Mission: Impossible—Fallout). More often, however, it fails to do either, and instead simply tries to dress up something that’s ultimately lifeless—it’s like planting a big megawatt star on top of a rotted Christmas tree.

If the teams behind movies like Mortal Engines want to go off the rails with epic battles and massive explosions, they need to at least make the action genuinely suspenseful. During the chase sequence that opens the film, Rivers teases us with sporadic tension but it never really goes anywhere. For instance, when the mining towns first spot London on the horizon, they all take off immediately—except one because its engine won’t start. Here, Rivers could have had some engineers go down to fix the engine while London closes in. Instead, he chooses to resolve the problem right away by having the machinist pull a lever in the control room.

This kind of quick fix, a reliance on physical set pieces to buoy a flaccid project, has become all too common within the genre. 2006’s Eragon, the ill-fated 2008 threequel The Mummy: Tomb of the Dragon Emperor, 2007’s ambitious swing-and-a-miss Beowulf—they all rely on visual gimmickry to doll up their stories. But in each case, it has amounted to blatant mimicry of a far more successful predecessor or slapped-together staging that really only approximates excitement. Swapping out one sword-and-sandals CGI splurge for a scene in which two characters simply connect would go a long way in resolving pitfalls like this. 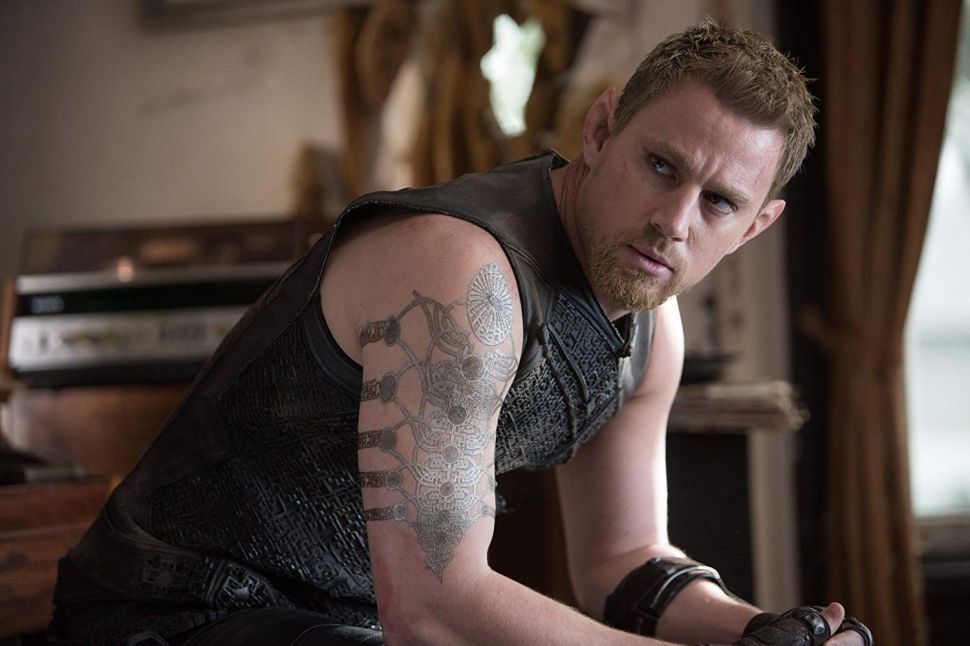 Producer: What about Channing Tatum, but like, not attractive? Warner Bros.

These first two points really apply to any movie, regardless of the genre. But let’s not forget what makes fantasy fantasy: its fictional world. In a fantasy story, the world itself is a character. And, like any other character, the audience must be given the broad strokes first, then be introduced to the intricacies over time.

The main problem with the world-building of Mortal Engines is that it introduces too much too quickly. In the span of two hours, we visit several moving municipalities—some on land, some at sea, some in the sky. But we spend so little time in these locations that we learn almost nothing about them. What’s more, when writers and filmmakers show their cards too early, they sacrifice the element of surprise.

The problem here is not just with the film’s execution, but with the source material. George R.R. Martin once compared a fictional world to an iceberg. The story is the bit of ice you see above the water. The immense body hidden underwater is the history and backstory. You cannot see it, but you know it is there, and that mystery improves the quality of the story—it invites us to fill in the blanks, ad infinitum.

With so many flops released over the years—from Luc Besson’s Valerian and the City of a Thousand Planets to the Wachowski siblings’ Jupiter Ascending (which even A-lister Channing Tatum couldn’t rescue) and Andrew Stanton’s 2012 turkey John Carter—the Lord of the Rings and Game of Thrones series are rare examples of fantasy adaptations that have been both critically acclaimed and commercially successful. This is, in part, because these projects’ original writers, J.R.R. Tolkien and Martin, respectively, thoroughly outlined the history of their worlds. The universe that Reeve has created, while interesting, lacks that level of depth.

Too often, as Martin says, fantasy writers simply attempt to put some ice on a raft and pass it off as an iceberg. The time has come for them—and for Hollywood—to think a little more about what lies beneath the surface. Otherwise, movies like Mortal Engines will just keep chugging along into oblivion.