It has been seven years since the release of A Dance with Dragons, the fifth volume of the fantasy saga that became the basis for HBO’s star series, Game of Thrones. Last month, author George R.R. Martin made the shocking confession that he has been suffering from a lengthy bout of writer’s block while also insisting this week that the finish is still coming.

While the writer has drawn the ire of understandably impatient fans, he’s certainly deserving of sympathy—the story of Westeros is a complicated one to tell. Where the show has opted to simplify the plot leading up to its final season, Martin’s unwillingness to compromise has led his magnum opus to sprawl outward, perhaps even out of his control. The narrative became so dense that he was forced to split the latest part into two separate books with 2005’s Feast for Crows covering one half of the cast, and 2011’s Dance with Dragons covering the other.

Martin is an enthusiastic and industrious writer, and a seasoned one, too. Over the course of five decades, he has published over forty novels and written dozens of scripts for shows like The Twilight Zone and Beauty and the Beast. With such a track record, you wouldn’t think he is particularly susceptible to the creative stagnation that haunts so many other scribes. Could it be, then, that the problem is not him, but the story itself? After all, even the greatest writers cannot work with a plot that’s fundamentally broken.

Yep, that’s right. We’re saying it. The series might have sold over 70 million copies worldwide and be the basis of a TV show that won over 38 Emmys, but that doesn’t necessarily mean its story arc makes sense. Here’s why.

*Warning: The following contains spoilers for Season 7 of HBO’s Game of Thrones.*

Martin originally conceived his A Song of Ice and Fire series as a new kind of fantasy story, one that, while set in a fictional world, closely resembles the real one in many ways (and was confined to a trilogy). Most importantly, Ice and Fire broke free from a tradition in fantasy writing that was established by The Lord of the Rings author J.R.R. Tolkien. Martin, like many fantasy writers of his time, greatly admired Tolkien. But unlike his contemporaries, he did not want to merely copy. Inspired by the complexities of real world history, especially the English War of the Roses, Martin sought to construct a fantasy story that feels more like a morally ambiguous political drama than a simple, good-versus-evil fairy tale.

“I believe in grey characters,” Martin once said during a panel for his personal encyclopedia, The World of Ice and Fire. “I don’t believe in black and white characters. I don’t want to write about a band of heroes on one side and the orcs on the other.”

But—and this a lot more evident for those caught up with the show—with the rise of the White Walkers, isn’t that exactly what the story is becoming?

Westeros is full of bad people, but they all have redeeming qualities and understandable motivations for their actions. Psychopaths like Joffrey and Ramsay stand out from the bunch, but, for the most part, our antagonists are all flawed but somehow relatable humans. The same can’t be said of the White Walkers who, like the orcs of Sauron, represent a mindless force of evil that must be stopped at all costs.

Running ahead of the books, the show has now entered the final stage of the story, a stage which reveals a fate that could be in store for the books, too: an abrupt halt to the personal conflicts that make up the “game of thrones” to unite against a greater evil. The threat posed by the Night King and his army nullifies the point Martin has been making in this series up to this moment. It could very well be that Martin wants to avoid this situation, but doesn’t know how.

This final battle is foreshadowed as early as the prologue of the first novel of the series. As the end draws near, Ice and Fire is forced to abandon the principles that it so proudly upheld at the beginning. Like we said, Martin’s story drew its strength from its resemblance to reality. The plot abides to the same rules—or rather, lack thereof—as life itself: events don’t always play out the way they are supposed to; good does not always triumph over bad; and characters don’t always get their due. The story of Ice and Fire, especially at the start of the series, is so vicious that you could never be assured who would make it to the end. No one was safe.

The greater the presence of the White Walkers becomes, the more this commandment is done away with, and the more Ice and Fire turns into a traditional fantasy story with a messianic hero who manages to beat the forces of evil against all odds (though Martin has teased a “bittersweet” ending).

The show has embraced its invincible saviors in the form of Jon Snow and Daenerys Targaryen. Martin may refuse to resort to cheap tricks, but that’s easier said than done. Part of the reason why so many stories, both fantasy and non-fantasy, tend to adopt this cliché, is to give their tails a satisfying conclusion. If you can’t distinguish between the good guys and the bad guys, then your story can only really end when everyone is dead—and just try to make that kind of ending seem worthwhile.

Martin wanted to revolutionize fantasy, and yet he built one of the genre’s oldest and most tired tropes into the fabric of his narrative. We can probably be sure that the writer, given his conscience, will hold off publishing his work until he has found a way to correct his mistake, but how long will that take? 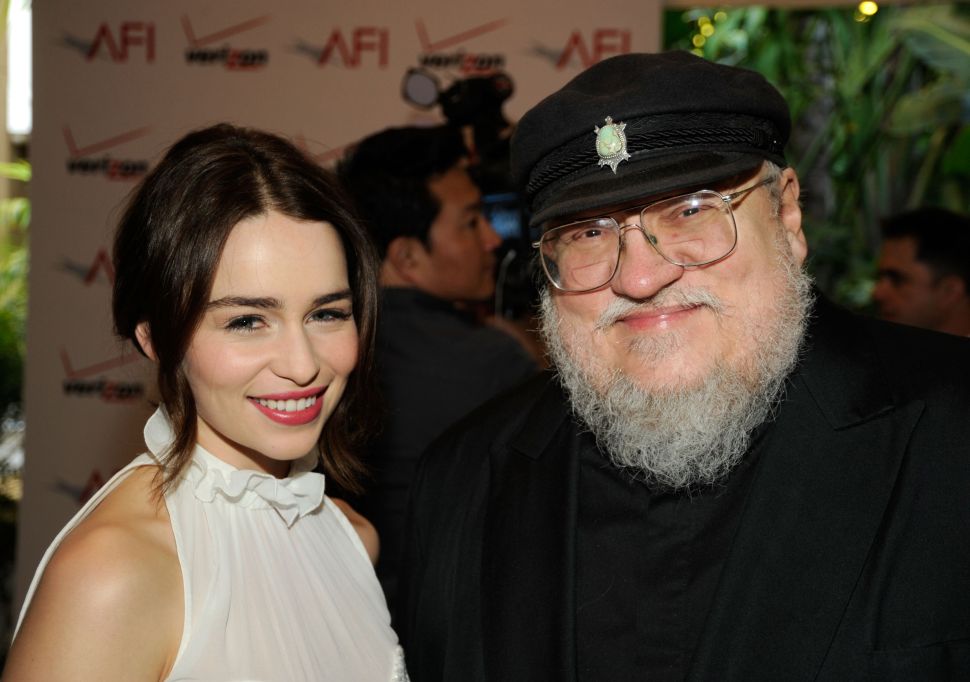