Newly freed convicted felon George Papadopoulos celebrated his early release from prison in true Trumpian form: with a lover’s quarrel, a right-wing conference and the announcement of a book about the Deep State.

After serving 12 days of his two week sentence, Papadopoulos was greeted back into society with a Twitter snafu from his wife, Simona Mangiante, in which she questioned his loyalty. Responding to a Friday tweet hailing her as “beautiful,” Simona wrote “@GeorgePapa19 doesn’t deserve a beauty like you, u have been loyal sweet and supportive. I never saw him defending you from all the attacks addressed to you. You can do better.”

Capturing the exchange on Twitter, The Daily Beast’s Will Sommer noted that “George Papadopoulos’ wife forgot to switch accounts before posting,” prompting her to delete the comment and her online persona. Upon restoring her Twitter account several days later, Simona said these “strange tweets” “weren’t real,” but offered no clues as to the identity of the alleged perpetrator.

I deactivated my account for a little while. Any strange tweets coming from account saying they were me weren’t real. Period. #basta

Avoiding any mention of the dig at his manhood, Papadopoulos later that evening posted a press release for his first book, Deep State Target: How I Got Caught in the Crosshairs of the Plot to Bring Down President Trump. Published by Diversion Books, an independent publishing house boasting Shark Tank reality star Mark Cuban as a client, the literary debut is said to give “a disturbing eyewitness report on a secret double government—intent on destroying lives and a presidency.”

Alongside his wife and online agitator Mike Cernovich, the former Trump aide teased his rollicking tale of espionage during an hour-long interview at the American Priority Conference on Saturday.

“I was viewed as a threat to certain goals and objectives of various governments and that’s why they wanted to take me out,” Papadopoulos told Cernovich, after claiming he was offered a job in the Trump administration the same day he was interviewed by federal investigators examining his contacts with the Kremlin-connected professor Joseph Mifsud.

Cernovich laughed off the felon’s allegations of colluding with foreign powers, saying he himself sometimes posts selfies at New York’s Russian bathhouses to mock Putin hysteria.

Did I think I would be part of throwing a surprise wedding reception for George Pappadopoulos & his lovely wife Simona yesterday?

Answer: I did not.

But I rarely know what life is going to bring me everyday now. lol

I’m just going toward where I am being led & enjoying it. pic.twitter.com/rijfSVjLsl

“I was invited along with a few other people to attend his interview in the Presidential Suite at the conference,” Straka told Observer, referencing a sideline interview Papadopoulos gave to One America News Network’s Jack Posobiec. “After the interview, we cleared out the suite and they ran to do another interview, and while they were gone we decorated the suite and ordered catering, so when they returned there was a beautiful wedding reception and dinner.” 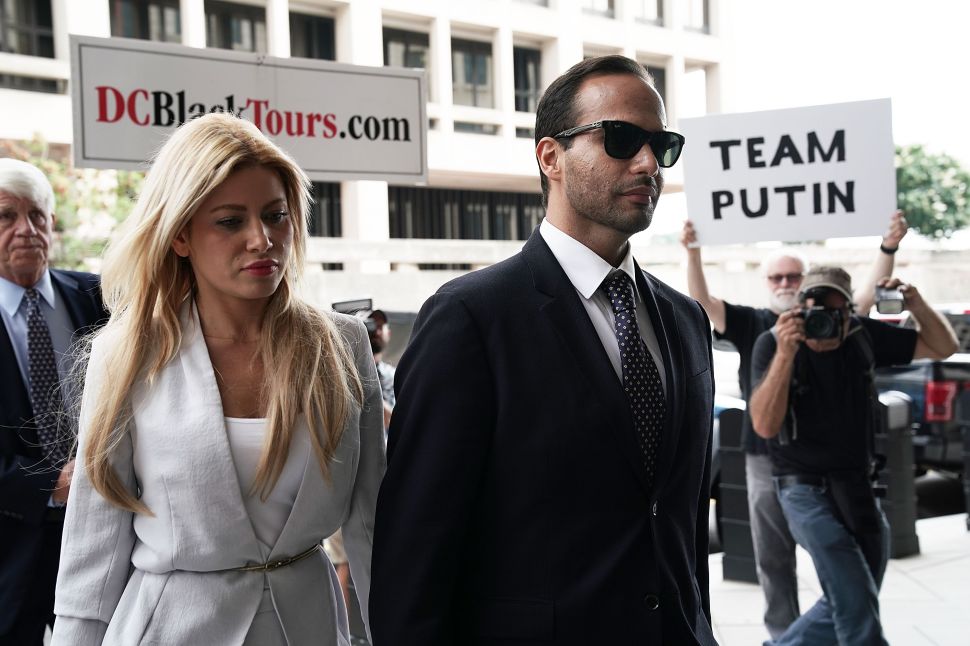