On Tuesday morning, Google CEO Sundar Pichai appeared on Capitol Hill for the first time to testify before Congress about a number of controversies surrounding the search giant over the past year, from data collection to political biases to its rumored China relaunch.

But for the tens of thousands of people who were watching the hearing online via live stream, Pichai’s carefully prepared testimony was disturbed by a unusually dressed man in the background who appeared to be the “Rich Uncle Pennybags” from the board game Monopoly.

The “Monopoly Man” was seated three rows behind Pichai and occasionally looked at the camera with cartoonish expressions.

Is that … the Monopoly Man sitting behind Google’s @sundarpichai? #GoogleHearing pic.twitter.com/WX4TOYh7gW

Tbh, I can't concentrate on a word @sundarpichai says with #monopolyman sitting behind him. #googlehearing pic.twitter.com/0el41sx4gC

And his mustache got bigger and bigger as the hearing progressed.

Is that … the Monopoly Man sitting behind Google’s @sundarpichai? #GoogleHearing pic.twitter.com/WX4TOYh7gW

In other news, this dude's mustache keeps getting bigger #GoogleHearing pic.twitter.com/LGOo94WW0X

The “Monopoly Man” was identified as Ian Madrigal on Twitter. Madrigal, who uses gender-neutral pronouns, is an activist who received medial attention last year when they appeared in the same “Monopoly Man” costume at the U.S. Senate hearing of Equifax CEO Richard Smith regarding Equifax’s massive data breach.

“Google spent $18 million lobbying politicians in 2017—more than any other company,” Madrigal said in a statement shared on Twitter before Tuesday’s hearing. “In return, Congress has abandoned its oversight role and allowed Google to wield monopoly power over every person who uses the internet.”

“We have no say in how Google uses even our most personal data, and the only way to opt out is to boycott the internet itself,” Madrigal added. “We can’t rely on tech giants to self-regulate. It is past time for Congress to step in and do its job.”

Google must not be tracking all our movements, because they certainly didn’t see me coming! pic.twitter.com/W1281PFgmf

The congressional hearing on Tuesday was open to the public. And Madrigal wasn’t the only activist in the audience. In the hallway outside of the hearing, a group of attendees held up banners of the Google logo altered into China’s national flag and handcuffs in protest of Google’s alleged launch of a censored search engine in China.

A protester just held up a poster of the Google logo with the Chinese flag. Protesters were also in the hallway as it began. #GoogleHearing pic.twitter.com/pHWted6fCX

Earlier, Capitol police removed someone holding a sign during the hearing. It appeared to show a Google logo altered to resemble the flag of China pic.twitter.com/jwCYRdg3Ld 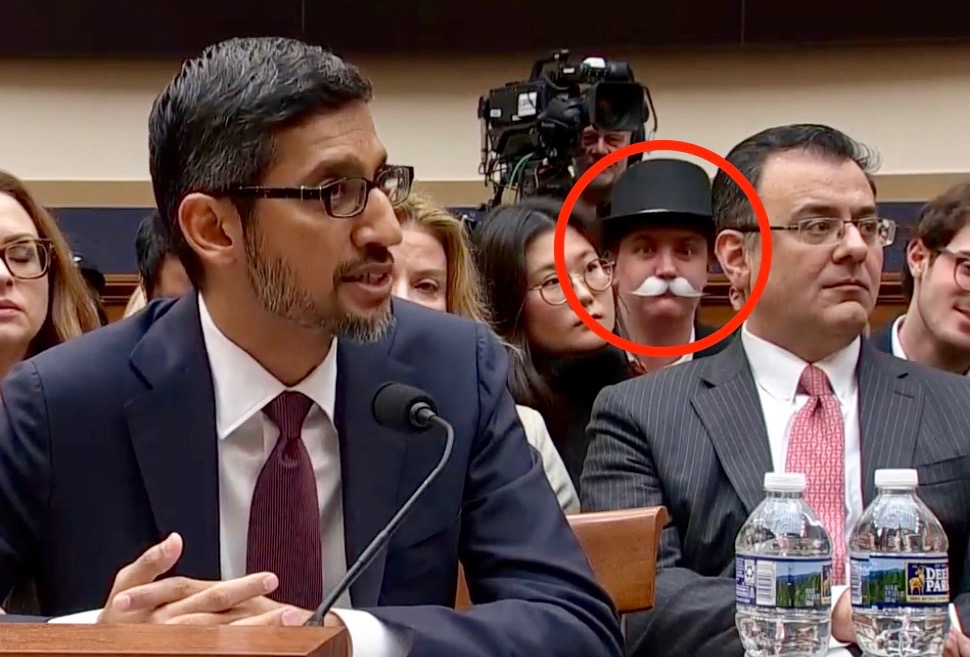