Queen Elizabeth isn’t exactly lacking in lavish accommodations—the monarch has any number of palaces at her disposal. But if she ever needs a place to crash in London, you can bet she’ll wind up at The Goring. The five-star Belgravia hotel has a longstanding relationship with the royal family, and even received a special regal stamp of approval.

The Goring family opened the 69-room stay in 1910 and continue to own and operate it. The hotel is famously discreet and tight-lipped about its guests, which only raises its esteem for Her Majesty—not to mention it’s a five-minute drive from Buckingham Palace, and 10 minutes from Kensington Palace.

It’s also where Queen Elizabeth reportedly hosts a private Christmas party for senior members of her staff (she made her pilgrimage there again this holiday season). But she’s not The Goring’s only royal fan—the monarch’s mother loved it, as does Kate Middleton. Here’s everything you need to know about the queenly hotel.

It’s the only hotel with a royal warrant.

Queen Elizabeth awarded The Goring a royal warrant in 2013 for its hospitality services. That essentially means the monarch declared it an official service provider for the royal family. It was the first time in history Queen Elizabeth gave the royal stamp of approval to a hotel, and thus far, the only time.

Kate Middleton spent her last night as a commoner in its Royal Suite.

Kate Middleton, Pippa Middleton and Carole Middleton checked into the hotel in 2011, before Kate walked down the aisle to marry Prince William at Westminster Abbey. They stayed in the 1,482-square-foot Royal Suite, which had only been unveiled to the public earlier that year. The Duchess of Cambridge headed back to the hotel in 2015 for its grand reopening post-refurbishment, where she put the final touch on the hand-painted wallpaper in its front hall.

The two-bedroom Royal Suite was commissioned to mark the hotel’s 100-year birthday celebration. It occupies the entire top floor of the hotel and includes a sitting room, a dining room, a grand piano and a private balcony,. The master bedroom walls are covered in the same silk used in the Titanic’s first-class dining room, and the suite is filled with antique furniture, including a four-poster bed and a life-size portrait of Queen Victoria. If Kate Middleton isn’t enough of a royal link, know that the silk bathroom walls are made from the same fabric used in the throne room at Buckingham Palace.

Guests staying in any of the five suites get a personal footman.

When a butler just isn’t enough, you can call upon one of the five footmen decked out in scarlet tailcoats and gold trimming (they sorta put the Buckingham Palace guards to shame). They’ll do anything guests require—unpack clothes, plan surprise parties or proposals, iron newspapers. One served as a personal attendant for a day trip to Paris, while another secured a very crucial Shetland pony for a birthday party once.

The Michelin-starred Dining Room was a Queen Mother favorite.

The hotel’s Swarovski chandelier–filled Dining Room is known for its traditional British menu, which features Cotswold white chicken, black pudding and Cornish cod. The Queen Mother, whose last public appearance before her death was at The Goring, was famously fond of the restaurant’s Eggs Drumkilbo, a lobster and egg dish. If you’re in a royally good mood, you can order it in her honor. 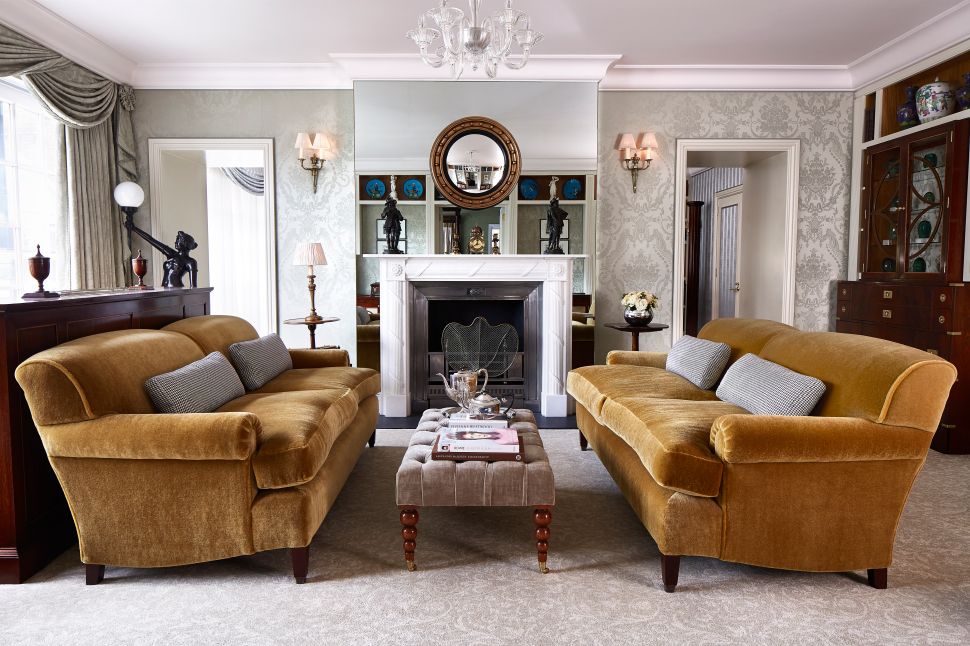