In one of the bizarre malfunctions of film history, the literary works of James Baldwin have been unjustifiably ignored by the movies. A rare exception (the only exception) is If Beale Street Could Talk, an occasionally moving though regrettably imperfect film based on one of the author’s least important novels, published in 1974. I’m glad it was made, because the under-appreciated writer and political activist, who deserted America to live and die in the south of France, deserves more exposure. I’m just sorry Barry Jenkins, the over-appreciated writer-director whose Moonlight, a film I found abysmal, won an undeserved Oscar, is the filmmaker who has resurrected him. If Beale Street Could Talk is better than Moonlight, but that is faint praise indeed.

Beale Street, according to James Baldwin, is a metaphor for any black community. In this case it is Harlem in the toxic mire of cruelty and injustice that poisoned the 1970s. In a world of hopeless disillusion, a love story emerges between a boy named Fonny (Stephan James) and a girl named Tish (KiKi Layne). Friends since childhood, their trust and affection grew into a stronger bond. The film begins when he’s 22 and she’s 19. They’re unmarried, he’s in jail, and she’s pregnant.

The first part of the movie is about the harrowing circumstances, family differences and financial setbacks that prevented two attractive, intelligent, and decent people from marrying and living happily ever after and landed him behind bars, wrongly accused of rape. The second part of the movie is about Tish’s desperate efforts to get him out. The movie is about the terrible toll race and poverty can take on the human soul when you are born with the feeling that you are worthless, and always will be. The cruelty and injustice of a world dominated by struggle was the theme of James Baldwin’s novel. With the speed of a caterpillar climbing a tree (the director’s stock in trade), the film finds the bricks and mortar to illustrate the novel’s validity and structure, but it’s a long haul getting there.

For the African-Americans so mournfully on view here, their lives are always in the hands of white people: the educated defense lawyer from the classy firm Fonny cannot afford, the surly cop who assaults him when Fonny defends Tish against a white street thug, even the employees and customers in the store where Tish finally gets a coveted job as the token black sales girl behind the perfume counter.

Their families and friends are not much help. Fonny’s best pal Danny (Brian Tyree Henry) comes by his cynicism from experience, having spent two years in the slammer falsely accused of stealing a car although everyone ignored the fact that he couldn’t even drive. Fonny’s unforgiving mother leaves everything up to God, who everyone has been taught is also white, while his self-righteous sister accuses him of immorality and sin. Tish’s mother is the only one who loves and protects them unconditionally and remains the voice of reason and strength throughout, making Regina King’s standout performance the centrifugal force of the film. “Love is what brought you here,” she tells Tish in her darkest hour before childbirth, “and if you trusted love this far, don’t panic now. Trust it all the way.” She is heartbreaking.

Like a lot of the new hot-shot directors, Barry Jenkins does not approve of telling a story in sequence (or maybe he doesn’t even know how). In any event, the movie jumps around in time frames that require a lot of concentration if you want to follow the facts. The lovers walk. They hold hands. They look into each other’s eyes with touching sincerity. They talk about what they’re going to have for dinner. It feels endless. When the end credits do at last begin to roll, there is no happy ending in sight. Frustration and helplessness are still part of life, but love does not die. If Beale Street Could Talk is sad, sobering, gritty and graceful—more a reflection of the underrated James Baldwin than the overrated Barry Jenkins. 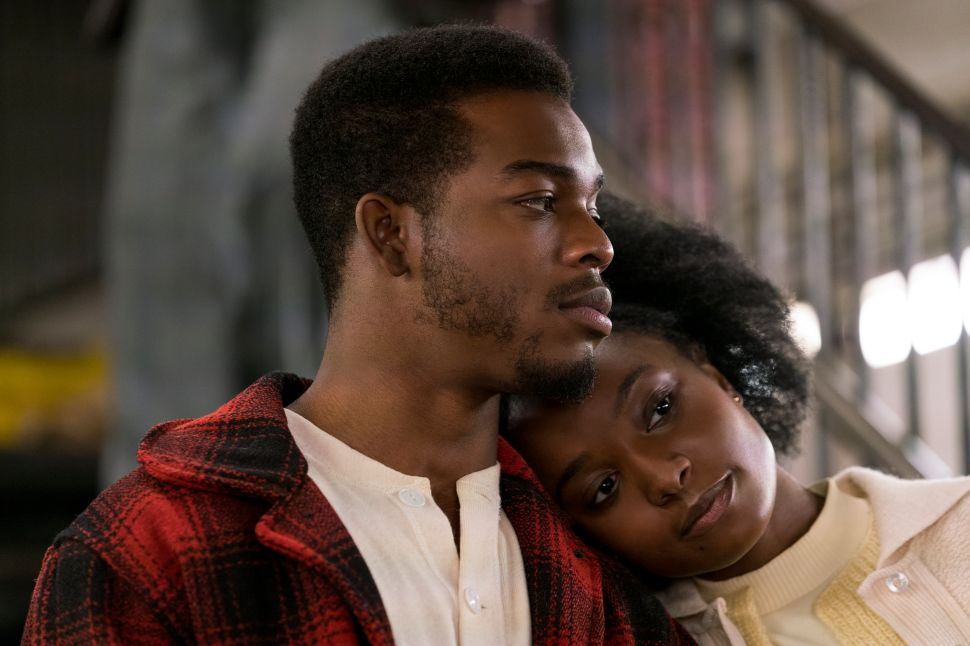