This year’s host-less Oscars saga continues, with Jerry Seinfeld leaping into the discussion. While talking with Willie Geist for an interview that will air on NBC’s Sunday Today, Seinfeld defended Kevin Hart, who stepped down as the ceremony’s host after a series of homophobic tweets from his past started recirculating.

While the comedian had previously acknowledged the tweets in separate interviews in 2014 and 2015, last week was the first time he offered an official apology.

“I have made the choice to step down from hosting this year’s Oscars….this is because I do not want to be a distraction on a night that should be celebrated by so many amazing talented artists,” he wrote on Twitter Thursday night. “I sincerely apologize to the LGBTQ community for my insensitive words from my past.”

When Geist asked Seinfeld what he thought about the controversy and today’s culture of explaining past comments, the comedian replied, “Kevin is in a position, because he is a brilliant comedian, to kind of decide what he wants to do. He doesn’t have to step down. But he can.”

He added, “And when you look at the situation—well, who got screwed in that deal?,” seeming to imply that Hart’s departure is a loss for the Academy and the show’s audiences. “I think Kevin is going to be fine, but find another Kevin Hart? That’s not so easy,” Seinfeld said. “He’s a brilliant guy with a movie career.”

Seinfeld isn’t the only Hollywood name to weigh in on the matter. TV host Nick Cannon drew mixed reactions for his defense of Hart after he posted past offensive tweets from other comics such as Chelsea Handler, Amy Schumer and Sarah Silverman.

Interesting🤔 I wonder if there was any backlash here… https://t.co/0TlNvgYeIj

On Saturday Night Live, Michael Che offered his take on the controversy, saying: “Didn’t the Academy nominate Mel Gibson for an award just last year? If Kevin Hart isn’t clean enough to host the Oscars, then no black comic is.” He added, “The only black comic I know that’s cleaner than Kevin Hart is booked for the next three to 10 years,” as a picture of Bill Cosby appeared on the screen.

Seinfeld noted that comedians have been tackling the complexities of social mores for years. “We have been navigating these slalom gates forever,” he explained. “Look, when I started out, there were dirty comedians. ‘Well, if you want to get on The Tonight Show, you can’t use any of those words.’ And a lot of us went, ‘OK. I still want to play. I’ll play.’ ‘Here’s a new rule, we’re cutting this out.’ ‘Ok. I’ll get around that.’ So, that’s our thing. It’s like Lindsey Vonn: Wherever you put the gates, I’m going to make them.”

Ratings for the Oscars have steadily declined over the past several years, and by enlisting Hart to emcee its 2019 ceremony, the Academy was hoping to attract a broader audience. It is now reportedly considering ditching a host altogether, which might ultimately be the best decision. 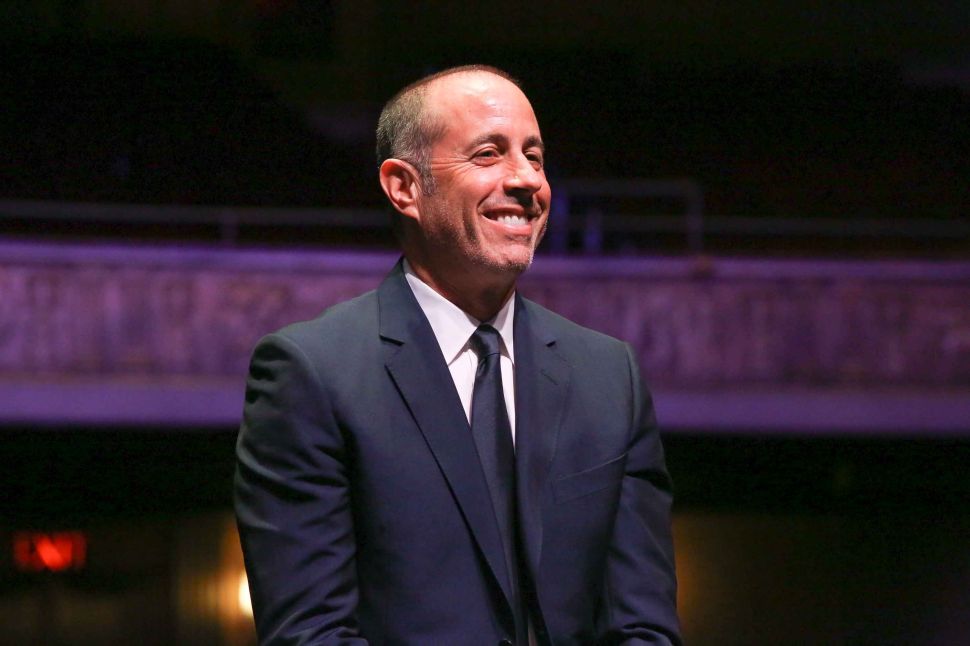