In mere hours, Kate Middleton went from a Cinderella dress princess moment (in custom Jenny Packham) at Buckingham Palace, to an equally regal touch down at a military base in Cyprus.

Prince William and Middleton made the trip to RAF Akrotiri on the Mediterranean island to thank British military forces for their sacrifices this year. They met serving personnel, families residing on the base, station personnel and local community members, according to Kensington Palace.

The Duke and Duchess of Cambridge began the day by speaking with a number of squadrons, thanking those serving for their commitment and sacrifice. Both Prince William and Middleton gave speeches, with the Duke of Cambridge noting that they had met some of the family members of the servicemen and women just the day before at Kensington Palace at a Christmas party they hosted. “Some of the children really understood what their mums and dads are doing and missed you all,” he said. “I’m sorry that we couldn’t bring your families with us for Christmas.”

Prince William told the crowd that with Christmas on the horizon, both he and his wife “feel strongly that praise for your work and recognition of your sacrifices is exactly what is due to you all. From my time in uniform, we both know a bit of what it feels like to balance your work commitments with your family life.”

The Duke and Duchess of Cambridge also joined the sergeant’s mess Christmas reception, where they played the part of Santa for some of those in attendance. Many of the family members of the deployed personnel who attended the festivities the day before had sent along gifts for their loved ones abroad. Prince William and Middleton delivered the presents themselves, bringing a bit of Christmas and holiday cheer to the military base.

The royals have quite a few more holiday celebrations coming up—they’re expected to have two family Christmas parties this year, alongside all their official commitments. It’s also almost time for the Cambridge family’s holiday card, marking Prince Louis’ grand debut. 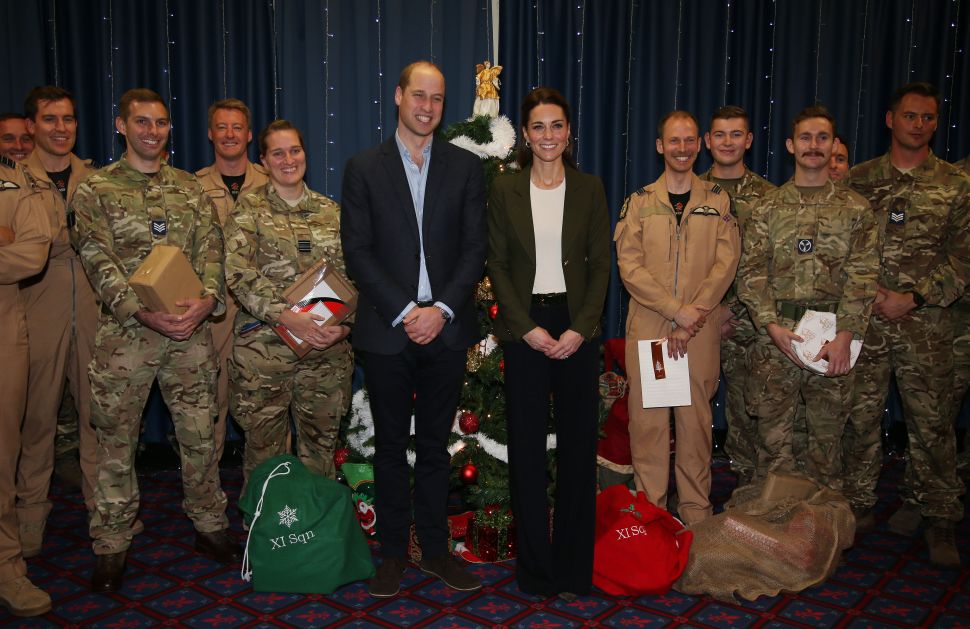