Mary Poppins Returns, falsely described by some reviewers as a re-make of the popular old Walt Disney war horse with Julie Andrews, is nothing of the sort. It is actually a sequel, and harmless escapist entertainment is the only reason for its existence. There have been other sugar plums created for the same reason, but this one is better because of the superior talents involved. Its charms, direction, musical production numbers and even its performances shine with a quality that surpasses the original, and the man responsible is Rob Marshall. The story of a flying nanny with a magic umbrella as a kite has never been my particular cup of cocoa, but Marshall, who brought Chicago and Into the Woods to life on the screen with fresh panache, manages to squeeze some of the corn syrup out of the filling without losing the innocence and sense of adventure that keep children enthralled. What I dreaded turns out to be a delightful surprise.

Decades have passed. The Banks family of Cherry Tree Lane in London has changed. Mom and dad are dead, of course, and Michael and Jane, the children raised by Mary Poppins at the turn of the century are now adults living in the Great Depression. Jane is played by Emily Mortimer, although Karin Dotrice, who played the original Jane when she was only nine years old, does make a brief cameo appearance, speaking only one line. Michael, who grew up to be the wonderful and very versatile British actor Ben Whishaw, still lives in the family house with his three children, who sing and dance with him and mug too outrageously for comfort. Michael’s wife has recently passed on, plunging the whole family into a deep depression.

Clearly it is time for Mary Poppins to descend from the clouds and set things right. As the magical nanny, Julie Andrews, who in my opinion was prim, proper and a bit of a bore, has been replaced by Emily Blunt, who hasn’t aged a day in all those plot years, imagine that (she’s less Victorian, too). Michael is behind in his bank loan payments and cannot find his father’s bank shares advanced to him ages ago, so the house is about to be repossessed, and the mortgage foreclosed. Mary Poppins must rescue them all, but she only has five days to do it. So everybody gets busy with the musical numbers, dancing like Arthur Murray in a hurry.

A simple dip in the bathtub leads to an underwater fantasy replete with coral reefs, friendly porpoises and a pirate’s treasure, not unlike the one with Esther Williams and the dolphins in Dangerous When Wet. No “Supercalifragilisticexpialidocious” this time around, but there is a ride in an animated carriage with a mind of its own and a family of singing pelicans—not to mention the cracking of a treasured heirloom bowl of Doulton china that leads to Broadway’s Lin-Manuel Miranda (Hamilton) and a music hall chorus line of dancing ostriches singing “The Cover Is Not the Book.”

Meryl Streep sings, too, as Topsy, the discombobulated owner of a Russian fix-it shop, and the scene-stealing Miranda stops the show dancing through the cobblestone London streets in the movie’s best production number, “Trip a Little Light Fantastic,” that could have easily been written for Gene Kelly, Bob Fosse, Donald O’Connor or Bobby Van in the salad days of MGM musicals. The original Mary Poppins score by the Sherman brothers, Richard M. and Robert B., was in my opinion disappointingly pedestrian. This time the songs by the Broadway songwriting team Marc Shaiman and Scott Wittman are more sophisticated.

The movie is full of joyous, unexpected things to applaud, especially a guest appearance by 93-year-old Dick Van Dyke as Mr. Dawes, Jr., the aging son of Mr. Dawes, Sr., the bank manager he also played in the original Mary Poppins, and the fabulous musical finale with Angela Lansbury and hundreds of multi-colored balloons that take the entire cast to the blue skies above London singing “Nowhere To Go But Up!” Guided by the rich imagination and keen musical savvy of Rob Marshall, Mary Poppins Returns is so light and airy that there’s nowhere to go but down. 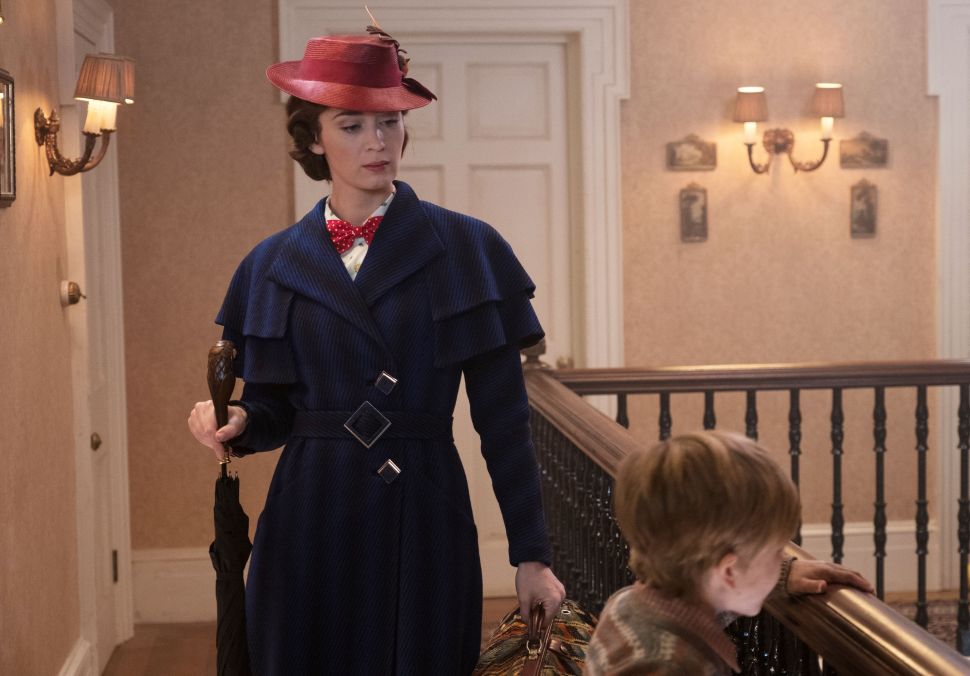