Meghan Markle brought holiday cheer and her theatrical prowess to her engagement at the Brinsworth House today. The home in Twickenham, which is run by the Royal Variety Charity, cares for retired artists and entertainers who spent their lives working in the industry and are now in need of assistance due to old age or health concerns.

It was a suitable gig for the former Suits actress, who put many of the skills listed on her recently unearthed résumé to good use, including her language expertise—the Duchess of Sussex chatted with one resident in fluent Spanish, according to royal reporter Emily Nash. Her vocal training also came into play when she joined residents in singing Christmas carols.

Markle participated in the arts and crafts festivities and helped decorate holiday artwork, and her calligraphy abilities were on full display in her gold-and-red bauble creation. Even her signature in the visitors’ book looks like it could be on a wedding invitation. The penmanship skills she previously used to earn extra money in her pre-acting, pre-duchess days clearly remain intact.

Recognise that calligraphy, anyone? Meghan’s contribution to the artwork at Brinsworth House today: #Variety4Charity pic.twitter.com/BtxeG2wA1w

While Kate Middleton has been sporting festive attire for her holiday appearances this year, Markle could never be mistaken for a Christmas tree, and there was no tartan in sight at Brinsworth House. Instead, the Duchess of Sussex opted for a $1,480 gray and pale pink floral frock by Brock Collection, with a $550 gray coat by Soia & Kyo.

The Duchess of Sussex decided to visit the Brinsworth House after seeing footage of the home when she attended the Royal Variety show with Prince Harry earlier this year. It turns out the Duchess already has experience with this type of charity, as she told Royal Variety Charity chairman Giles Cooper that she often visited a similar care home for retired actors in Los Angeles. Perhaps she’ll make a stop at that home when she and Prince Harry head to the United States for their reported royal tour next fall.

The Royal Variety Charity has a long history with the royal family, as King George V was the first patron in 1921. Queen Elizabeth became patron upon being named monarch in 1952, but perhaps Markle’s visit is a sign of what’s to come in the new year. It was recently reported that the Queen is planning on giving one of her patronages to Markle in 2019, and considering her support of the arts, Brinsworth House would be a perfect fit. 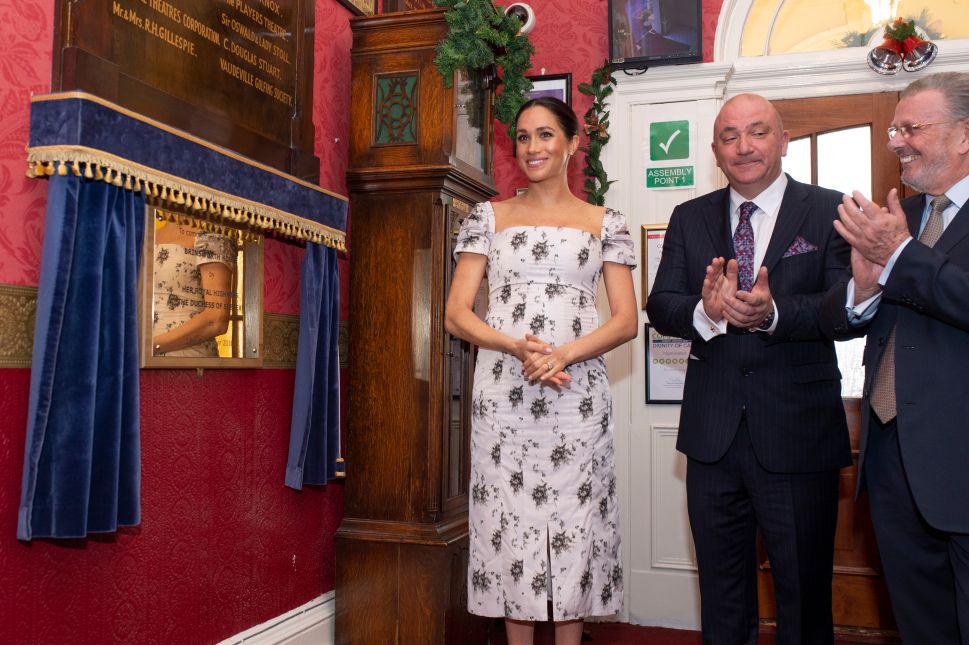