If there’s one thing opera management loves—I mean, besides posting the “Sold Out” sign for a whole run of performances—it’s tradition. Currently the Met has the pleasure of saluting two important anniversaries by presenting Plácido Domingo (now in his 50th season with the company) in a revival of Puccini’s trilogy of one-acts Il Trittico (which had its world premiere at the Met 100 years ago.)

In a way, this amounts to a personal anniversary for me as well: Domingo had just hit it big as a recording artist at the moment my rebellious teen tastes turned to opera. In fact, one of the first opera LPs I purchased was RCA’s Il Tabarro (one section of the Trittico) featuring Domingo and Leontyne Price.

And Il Trittico itself—as performed by the Met on tour in Dallas in May 15, 1976—literally, no exaggeration, changed my life. I heard the resplendent soprano Renata Scotto, then at the absolute zenith of her powers as an interpreter, sing…no, live the leading lady roles of all three operas. She taught me what opera could be, and since then I have been absolutely devoted to this most marvelous of all art forms.

So attending Trittico Friday night at the Met required equipping myself with a set of reasonable expectations. Even so, the performance felt no more than blandly efficient.

Domingo enjoyed a handsome success in his moment, in the title role of Gianni Schicchi, the final opera and only comedy of the trilogy. The artist, who will turn 78 next month, now has lowered the range of his rich voice from tenor to baritone, where it bloomed in the lyrical lines of Schicchi’s mock-lament “Addio, Firenze.”

He’s not a natural comedian, which puts a bit of a dent into this farce about a greedy family who hire the wily Schicchi to forge a will. In Jack O’Brien’s over-the-top production, the rest of the cast kept the shtick dialed up to 11, and so Domingo tended to fade into the background, especially when mezzo Stephanie Blythe was camping it up as the avaricious Aunt Zita.

In fact, the whole night offered scant star power, or for that matter, passion. The deadly love triangle of the lurid opener, Il Tabarro, seemed downright lethargic, despite the hell-for-leather tempos conductor Bertrand de Billy chose for this and the other two segments of the program. About the only excitement was sparked by soprano Amber Wagner and baritone George Gagnidze as the miserably married Giorgetta and Michele. These two, plus Blythe, were the only singers who mustered the wallop that only king-sized voices can deliver in a huge theater like the Met.

The heart of the Trittico is the middle piece, Suor Angelica, a tearjerker about a nun who learns that the illegitimate child she was forced to abandon has died. The intensely emotional title role was written for the Met’s then prima donna assoluta, Geraldine Farrar, and it was in this part Scotto made an almost supernaturally intimate connection with that audience in Dallas four decades ago. (I can still remember that I heard quiet sobbing from several directions only seconds into the soprano’s first solo.)

Sadly, Kristine Opolais, the Met’s Angelica, creates something like the antithesis of that effect. This artist, who triumphed just a few years ago here in the demanding role of Madama Butterfly, seems to have lost any control over her voice, wobbling constantly out of tune and snarling out even the most demure lines in a truculent chest register. Her once sensitive acting has degraded into a single affect, a nonstop PTSD twitch.

So perfunctory a revival of such a special piece does the Met no honor. This sad truth was underlined by a bracing new version of Verdi’s Otello from the Bayerische Staatsoper webcast live on Sunday. Director Amélie Niermeyer boldly rethinks the drama from the subjective point of view of Desdemona (Anja Harteros) as she struggles to cope with the increasingly erratic behavior of her emotionally distant husband, Otello.

The production served as a reminder that it’s not long enough simply to do opera. Unless everyone concerned is willing to put their life on the line, you might as well leave the theater dark. 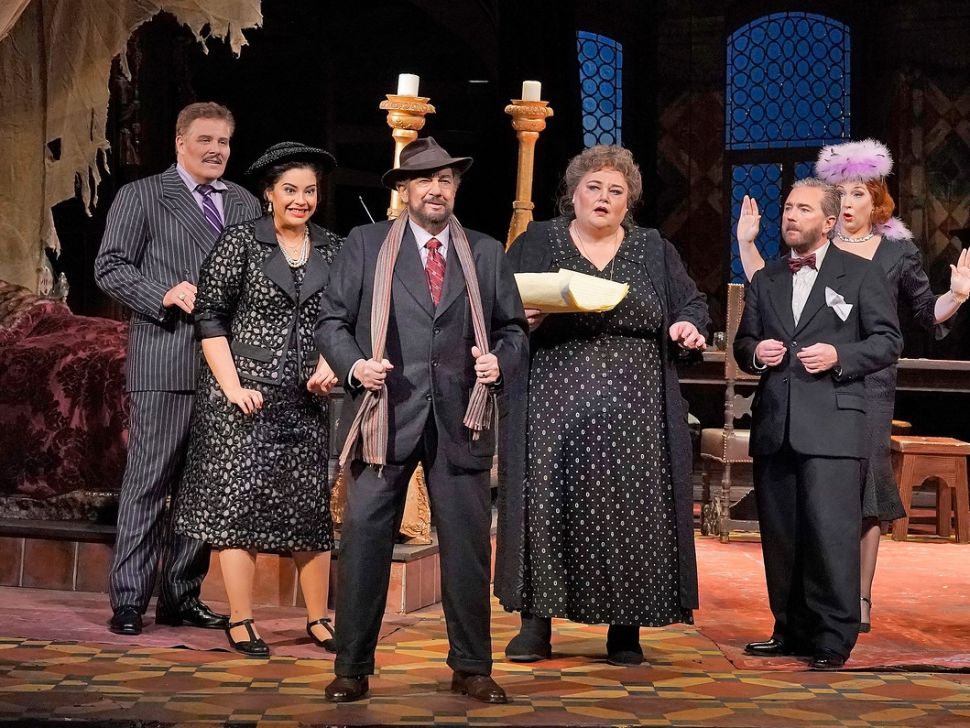