Miami Art Week is upon us, bringing with it a legion of art fairs, collector events and parties of varying levels of exclusivity. For those looking to get a reprieve from the teeming art marketplaces like the week’s center point, Art Basel Miami Beach (open to the public on December 6) here are six institutional exhibitions that offer excellent art without the commercial climate.

One full year since I.C.A. Miami moved into its beautiful Aranguren & Gallegos Arquitectos-designed home in the Design District, the institution presents “Judy Chicago: A Reckoning,” a major survey of works by the pioneering feminist artist. Though Chicago is best known for her Dinner Party installation, one of the first internationally recognized pieces of feminist art, her wide-reaching oeuvre includes countless paintings, sculptures and wall hangings—many centered on constructs of toxic masculinity.

“Judy Chicago: A Reckoning” will celebrate three decades of Chicago’s groundbreaking career, culminating in February in the newest iteration of her Atmosphere series, the colorful live performances involving fireworks and dry ice that the artist staged primarily during the 1960s and 1970s. The new work will fittingly be called A Purple Poem for Miami. Also keep a look out for her discussion with Jeffrey Deitch at Art Basel Miami Beach’s Conversations Program.

To commemorate the 35th anniversary of Surrounded Islands, the epic installation where Christo and Jeanne-Claude encircled 11 uninhabited islands in Miami’s Biscayne Bay with 6.5 million square feet of floating pink fabric, the P.A.M.M. presents a documentary exhibition of the history of the project. The exhibition traces Christo and Jeanne-Claude’s lasting impact on the rise of Miami as a contemporary hub with a breadth of archival materials. Over 50 drawings and collages, hundreds of photographs and a large-scale model of the islands are included.

Don’t miss the Art Talk P.A.M.M. will host on December 4 with Christo himself. The artist will discuss the story behind this project of epic proportions and the rest of the large-scale, ephemeral public works he created with his late wife and collaborator, Jeanne-Claude, for over six decades.

Completely self-taught, Miami-native Purvis Young spent his whole life creating collaged paintings from materials he found around the city’s Overtown area, one of its oldest black neighborhoods. In 1995, when Young was facing eviction from his art-filled studio in what is now Wynwood, Don and Mera Rubell bought every single one of his works. They have since donated many of them to museums, but due to the artist’s prolific career, their holdings still allow for a beautiful large-scale exhibition on the foundation’s ground floor.

“The Haas Brothers Ferngully” at The Bass

From December 5, The Bass presents the first solo museum exhibition of the irreverent Los Angeles-based twins, Nikolai and Simon Haas. Their anthropomorphic furniture pieces and sculptural objects, sometimes comical, always irreverent, are constantly pushing and innovating the boundaries of art and design. The exhibition takes its name from the 1992 animated film FernGully: The Last Rainforest. Using the fantastical spirit of the film and the sublime qualities of the natural environment, the works featured make up an immersive show of humanoid-design objects that look as though they’ve been plucked from a Seuss-ian universe.

“AfriCOBRA: Messages to the People” at Museum of Contemporary Art North Miami (MOCA)

In 1968, Jeff Donaldson, Jae Jarrell, Wadsworth Jarrell, Barbara Jones-Hogu and Gerald Williams founded AfriCOBRA, the African Commune of Bad Relevant Artists. The Chicago-based art collective’s humanistic depictions, vivid colors and pro-Black subject matters would define the visual aesthetic of the Black Arts movement of the late 1960s and early 1970s and continue to have a significant impact on contemporary artists. To celebrate their 50th anniversary, the exhibition at MOCA features the works of original and current members that incorporate such diverse processes as painting, printmaking, textile design, photography and sculpture.

New York-based Jibade Khalil Huffman is best known for his video and photo works that employ found material to address issues of race and visibility. For his newest work at Locust Projects, the artist explores the way that music permeates into our visual culture. Huffman has produced a new video and a new body of public sculptures that are situated throughout musical spaces like nightclubs and record stores all over the Miami-Dade County. 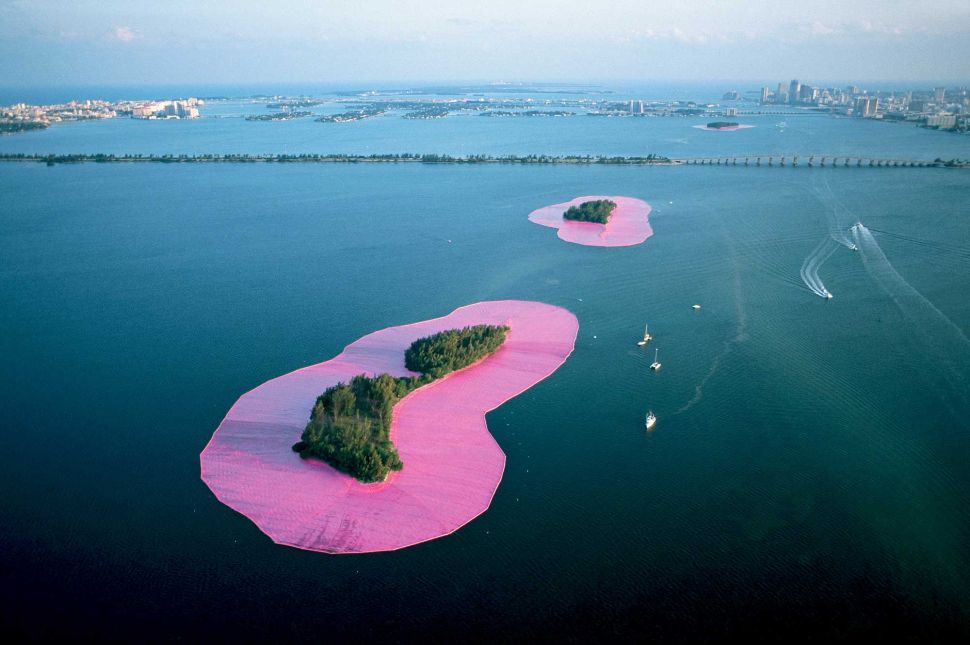