Every day of Donald J. Trump’s presidency, his White House has been dogged by allegations surrounding his 2016 campaign’s illicit involvement with Russia. For almost two years, his administration has been under scrutiny by the press and the Justice Department over suspect ties to Moscow.

President Trump’s defense has been not just stout denials of any untoward activities but turning the tables on his accusers. In a classic Trumpian move, the president insists he’s the victim of a far-reaching plot involving Democrats and various organs of the Federal government, which colluded in a doomed effort to keep the Republican nominee from the White House.

This is the up-is-down approach, where nothing is as it seems to be, and where not only was there NO COLLUSION but his accusers are the real colluders, and all their assertions fake news. To term this properly, it’s a conspiracy theory, and to believe it you must have no idea how the alleged “Deep State” actually works.

Conveniently for Trump, most Americans have no idea how our intelligence agencies function in reality, so millions of citizens have swallowed the president’s ridiculous narrative hook, line and sinker. That our commander-in-chief constantly reinforces its central tenets in tweets helps to keep his MAGA legions on-side.

Central to this conspiracy theory is Michael T. Flynn, the retired Army three-star general who served as Trump’s national security guru on the campaign trail then lasted barely three weeks as the new president’s National Security Adviser before flaming out over his undisclosed ties to—naturally—Russia.

Flynn was a perfect fit for Team Trump, since the resume which landed him at the head of the National Security Council was a piece of puffery eliding failures, while his arrogant ignorance led to his astonishingly abrupt downfall. Since Flynn is no multi-millionaire like many higher-ups in Trump’s administration, Flynn lacked the resources for a protracted legal battle with Robert S. Mueller, III and his Special Counsel investigation. Thus, at the beginning of December 2017, Team Mueller announced a plea deal with the disgraced Flynn, who admitted to “willfully and knowingly” making “false, fictitious and fraudulent statements” to the FBI about his Kremlin contacts.

For a year, Washington, D.C., waited with bated breath for the outcome of Flynn’s plea. A big hint about where it was headed came earlier this month in a sentencing memo from Mueller that stated Flynn “deserves credit for accepting responsibility in a timely fashion and substantially assisting the government,” with a recommendation for little to no jail time for the admitted felon. Flynn had given the Special Counsel so much valuable information about Team Trump that Mueller, no candy man, felt he deserved a pass on lying to the FBI, which Mueller headed for a decade.

This ought to have given chills to the president and his defenders, yet somehow did not. Trump possesses a strange soft spot for Mike Flynn, perhaps due to the president’s pronounced fetish for generals, and that has continued undeterred by events. While the president denounced Michael Cohen, his turncoat consigliere, as a “rat” in full-blown Mafia style, Flynn has remained in Trump’s good Twitter graces.

Indeed, Flynn’s central position in the presidential conspiracy theory dictates a sweeping counter-narrative to explain awkward developments. In this telling, which has White House endorsement, Flynn was “trapped” by the FBI into lying about his shady ties to the Kremlin, without a lawyer present. That fateful January 24, 2017 interview has become the centerpiece of denial. Mueller’s release of its contents has done nothing to tamp down the crackpottery. Like Roswell, Area 51 and the Abominable Snowman, faith in the Flynn-was-framed fantasia seems destined to live on among true believers, evidence be damned.

In Trumpworld, Flynn was a Beltway ingénu who was tricked by the sinister FBI. In reality, the retired lieutenant general, who spent more than three decades in military intelligence and headed the Defense Intelligence Agency, fully understood that when you possess top-level security clearances—as Flynn did his entire career—you are required to answer questions about your foreign contacts, whenever you are asked. Requesting to have a lawyer present is tantamount to an admission of wrongdoing.

Nevertheless, Flynn tried the I-was-tricked ploy, too: a December 11 sentencing memo from his attorneys implied that the Bureau deceived him and that he wasn’t aware that lying to the FBI was a felony. On cue, President Trump backed this up on Twitter and Fox News, painting Flynn as the innocent victim of FBI entrapment.

A week later, we saw how that turned out. Trumpian myth-making anticipated that Flynn’s long-awaited sentencing in Federal court would be a grand vindication of the president’s conspiracy theory. At a minimum, Flynn would walk free and Mueller would be shamed. Or maybe Flynn’s guilty plea would be thrown out and the Special Counsel’s entire investigation would collapse. Many were the right-wing hopes hung on Judge Emmet Sullivan, a skeptic regarding Federal overreach.

None of that came to pass. In fact, the opposite did. Judge Sullivan, clearly perturbed by Flynn’s last-minute effort to blame the FBI for his own crimes, asked the general if he stuck by his admission of guilt. Flynn replied in the affirmative, explicitly denying that he had been entrapped and acknowledging he was aware that lying to the FBI was a crime.

Sullivan responded acidly to Flynn: “Arguably, you sold your country out.” Then he asked the Special Counsel whether it had considered charging him with treason. They had not, and Judge Sullivan later apologized for mentioning treason, but yesterday was nevertheless a devastating blow to the White House. “I cannot assure that if you proceed today you will not receive a sentence of incarceration,” Sullivan warned Flynn after a harsh rebuke. The judge then suggested he take three more months to cooperate fully with Team Mueller, and Flynn accepted.

There imploded a key tenet of President Trump’s conspiracy theory about his Kremlin ties. In the cold, hard light of a Federal courtroom, up does not actually turn out to be down, Mike Flynn was never set up or entrapped, the Mueller inquiry is real and closing in, and there’s nothing the White House can do to make it stop. Enraged “modern presidential” tweets insisting that the mounting evidence of Trumpian collusion with Moscow does not exist may still persuade true-believers, but they will have no impact whatsoever on the judicial realities now approaching the White House at speed. 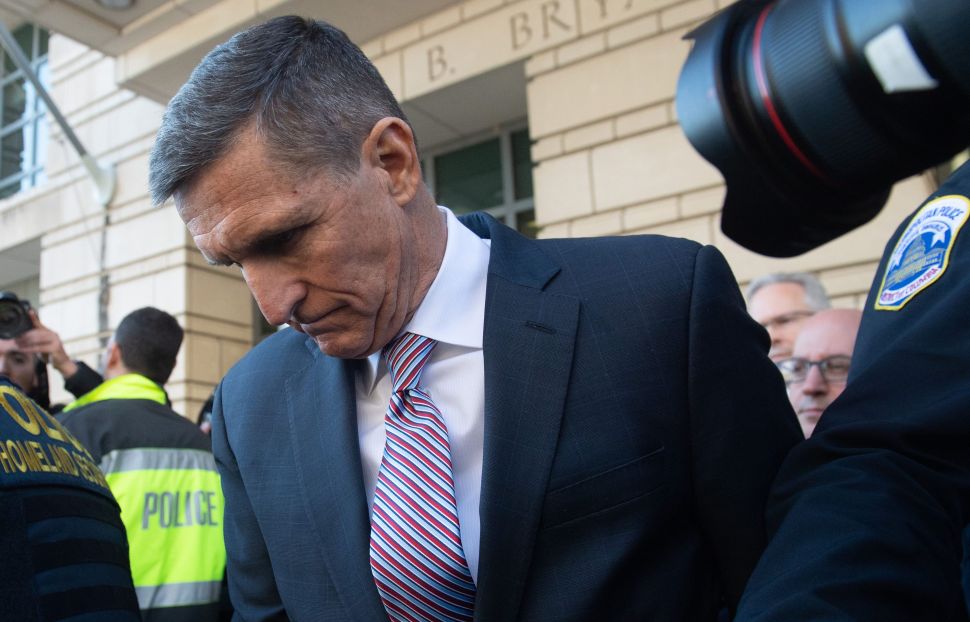