The world is in such a mess that in the midst of so much misery, does anybody really care about show business? The answer, in 1976, was a resounding yes. Paddy Chayefsky’s Oscar-winning screenplay for Sidney Lumet’s Network was a blazing, blistering indictment of television after the “Golden Age” of TV drama, when the industry went senile. Now that the idiot tube is worse than ever, it seems like an appropriate time to lash out again.

Despite an overwhelming star performance by Bryan Cranston in the juicy role that won Peter Finch a posthumous Oscar as the demented TV news anchor who goes ballistic and throws an entire nation into chaos, demanding that millions of viewers throw open their doors and windows and scream “I’m mad as hell and I’m not going to take this anymore!,” and despite a technology-crammed set so full of distractions that you are too busy watching all the visuals to remember what the play is about in the first place, the new Broadway production of Network is as dated and irrelevant as a nickel phone call.

If Chayefsky left anything out in 1976, it was the key to Walter Cronkite’s washroom. Everything else about the sprawling, literate and ultimately breathtaking dossier on an industry that failed to live up to its potential while simultaneously influencing the lives of uncounted legions of people was intact. It blasted a hole in the glass eye of a fictional network (called UBS) and revealed the numbskulls and opportunists who made the decisions and controlled the airwaves.

The adaptation by Lee Hall (Billy Elliot) is faithful enough to the original script, but there’s a central problem. In the 42 years since the historic film hit the screen, the power of television has been replaced by the internet, which is much more corrupt, and by the depraved advent of social media, which is much more dangerous. All of which weakens the original premise and feels oddly dated and out of step with today. Nothing about the current transfer of Network from movie screen to Broadway’s Belasco Theatre stage left me with the same impact I felt in 1976.

Much of the antiseptic dilution is the fault of Ivo van Hove, a dour Belgian director (lots of laughs in Belgium) who is a firm believer that nothing in theater history has ever been so good he can’t make it better. I liked his revival of Arthur Miller’s A View from the Bridge in spite of the unnecessary addition of naked longshoremen showering onstage, but hated his boring revival of Miller’s The Crucible replete with animals and birds prancing among the Salem witches. He’s a show-off who always puts gimmicks ahead of context and content. Now, with Network, he pulls out all of the stops, drowning the audience in diversions.

The stage is busier than Penn Station during a transit strike. On one side, a television studio with more screens than the naked eye can count and clocks ticking in real time, and on the other side, a working restaurant with lighted tables, waiters, wine stewards and patrons drinking and eating for no logical reason (and an additional charge above and beyond the already exorbitant cost of tickets). Everything in-between crawls with producers, cameramen, sound engineers, lighting experts and assorted assistants to assistants. You grow dizzy just waiting for an opening line.

Oh yes, the plot. In case you are one of the few people who never saw the movie, a veteran news anchor named Howard Beale, slowly losing his grip on reality, goes mad on camera the night he is fired for poor ratings after 25 years of network stardom, and promises to commit suicide “live” on the air in one week, increasing the audience by 30 million viewers in one night, and driving the Nielsens through the roof.

Through the steam-rolling efforts of a cold, conniving director of programming (a role that won Faye Dunaway an Oscar), Beale is allowed to rant on nightly, a mentally incompetent news commentator who becomes a hysterical prophet denouncing the hypocrisy of the 1970s and America’s pantheon of knowledge, culture, and phony news passing itself off as the gospel truth to a gullible nation. The ratings rise, but all human concepts are sacrificed to the corporate image. Both the Chayefsky script and van Hove’s direction careen recklessly between a swerving clash of styles that lurch from mood to mood in scenes of farce, high drama, naturalism and comic fantasy. The result is a combination of ambrosia and apocalypse.

Unfortunately, most of it is too ill-served by a second-rate cast too lacking in charisma to write home about. Tony Goldwyn is effective as Beale’s best friend, supporter and network boss (played memorably by William Holden in the movie). But the women are treated like also-rans. The heartbreaking honesty and power that won Beatrice Straight a Best Supporting Actress Oscar as Holden’s wife in the movie is nowhere in view of Alyssa Bresnahan’s interpretation of a woman scorned, and Tatiana Maslany as the ruthlessly ambitious program director who nearly wrecks the network makes no acid impression at all.  Bring back Faye Dunaway!

Which pretty much leaves the domination of the stage to Bryan Cranston. He knows how to emblazon a midlife crisis with passion. He’s been doing it skillfully on TV for years, and especially in the overlooked, undervalued film Wakefield. Preposterous but touching as a man having a nervous breakdown on the boob tube while legions cheer, he combines all of his considerable talents to great advantage, guaranteeing the audience one of the most explosive acting feats in recent Broadway history. I call Network a “morallegory.” It might be a spoof on reality, but Bryan Cranston is a one-man experience that left me numb. 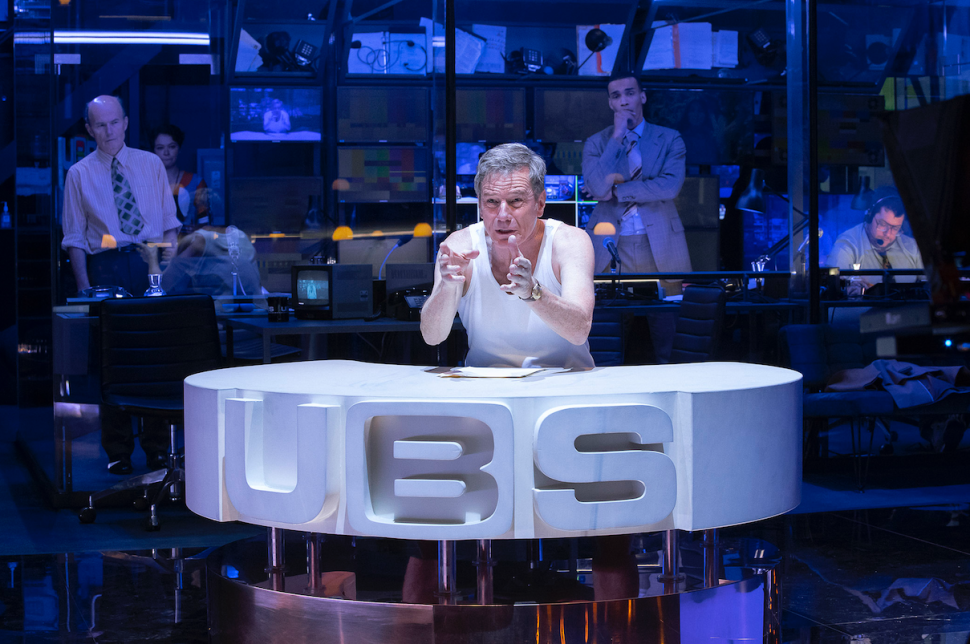