Figuring out what to do on New Year’s Eve is almost always an ordeal—so much so that many of us put off making plans until 11:52 p.m. on December 31. But if you’re looking to ring in 2019 properly, you can’t go wrong with a swanky hotel party. Securing a reservation at an upscale accommodation means that you’ll not only have your night figured out, but, even more important, your trek home covered—as soon as you feel that first yawn coming on, you can just head up to your room.

To make your final days of 2018 just a little bit easier, we’ve rounded up the most unique, over-the-top New Year’s Eve bashes at luxury hotels around the world. Whether you’re in New York, Bangkok, Aspen, Beverly Hills, Dubai, Tuscany or Zurich, these festive soirees are sure to live up to the hype.

If you didn’t get an invite to hang with Queen Elizabeth and the royal family at Balmoral Castle, you still have a very glamorous New Year’s Eve option in Edinburgh. The Rocco Forte Balmoral Hotel’s Hogmanay Gala Ball starts out with a welcome party of bagpipes and drums by the Royal Burgh of Stirling and is followed by champagne in the Holyrood Suite. Guests then move to the Sir Walter Scott Suite for a four-course dinner and more music by the ceilidh band. It all culminates with a glorious fireworks display over Edinburgh Castle. From $1,170 a night, Roccofortehotels.com.

Start out with a seven-course dinner at Vertigo, the hotel’s 61st-floor restaurant, before heading to Moonbar rooftop, where you can enjoy a DJ, a live band and a view of the fireworks display over Thailand. From $725, Banyontree.com.

The concierge at Viceroy Snowmass will personalize all your New Year’s plans. Options include a snowcat ride to the fireworks, an on-call champagne butler, a private confetti-themed champagne cocktail class, a personal makeup artist and hairstylist, and an interior decorator who will customize your room with glitter balloons and tinsel. And, of course, they’ll get you a ticket to the New Year’s Eve Gala, which features a four-course meal, live entertainment and a champagne toast. From $3,000, Viceroysnowmass.com.

New Year’s Eve doesn’t have to entail a big party with hundreds of people. Those looking for a more intimate celebration can opt for the three-night villa escape at the Rosewood Castiglion del Bosco in Tuscany. The four-person package brings pretty much everything to your private villa, including dinner, a cooking class and a specially designed Christmas tree and decorations. There’s also a private fireworks show, though you’ll have to leave the villa to enjoy the final event—a classic Tuscan wine tour. From $7,355 a night, Rosewoodhotels.com.

The Beverly Hills hotel is transforming its Marquesa ballroom into a Great Gatsby–themed affair, complete with a cocktail reception, a five-course seated dinner with wine pairings, dancing and a champagne toast at midnight. From $415, Montagehotels.com.

The Edgewood Tahoe is bringing a bit of New York to South Lake Tahoe. Its black-tie Black & White Ball is inspired by Truman Capote’s legendary party at the Plaza, and begins with a red carpet complete with paparazzi. Guests are greeted by an eight-piece band and a woman wearing a frock made of champagne flutes, because why not? Then there’s cigar rolling and cognac tastings. The gourmet buffet, Taste of Edgewood, serves up bites from three eateries: Edgewood Restaurant, Bistro and Brooks’ Bar & Deck. End the night with a private fireworks display on the golf course. From $250, Edgewoodtahoe.com.

Switzerland’s Dolder Grand is hosting “A Magic Night of Varieté,” which includes a fancy black-tie gala dinner with live entertainment, art and sound installations, and midnight fireworks over the Zurich skyline. From $454, Doldergrand.com.

The San Diego hotel is going all out for its 130th birthday. The World’s Greatest Legend gala will take place in its oceanfront ballroom, which is being transformed into an opulent big top (think fancy circus). The black-tie bash features live music, a five-course dinner and a surprise performance. From $375, Hoteldel.com.

Last year Dubai set a Guinness World Record for World’s Biggest Pyrotechnics Display, so these kids clearly don’t mess around. The Taj Dubai’s Treehouse party features a barbecue and seafood bar, cocktails, a live DJ performance and, most important, a rooftop view of the Burj Khalifa fireworks. From $450, Tajhotels.com.

The 19th-century lakeside hotel is hosting its New Year’s Eve gala in the Sandoz ballroom, which happens to be where the 1923 Treaty of Lausanne was signed. The night’s theme for its dinner and show (which will feature a cappella performances) is all about bringing New York’s Fifth Avenue to Switzerland, so expats should get excited. From $480, Brp.ch.

The Manhattan hotel’s black-tie New Year’s Eve gala will take over Clement restaurant, festooning it with sparkling accents. It’s all very old-school Big Apple, with a fancy three-course dinner, dancing and live music. Then you can start the new year right with a three-course brunch. From $525, Peninsula.com.

That’s right, another posh Scottish fete. The estate’s Hogmanay celebrations include a three-night stay for two people. After spending the day hanging at the golf academy, embarking on an outdoor treasure hunt, air rifle shooting or taking Scottish country dance lessons, you can head to a black-tie party soundtracked by bagpipes and drums. From $5,950, Gleneagles.com.

Ringing in the new year calls for a little nostalgia, so why not go way back and celebrate in the 10th-century Angkor temple Prasat Kravan? The Cambodian festivities there will include a locally inspired feast and performances from Phare Circus acrobats and the Sacred Dancers of Angkor. From $575, Aman.com. 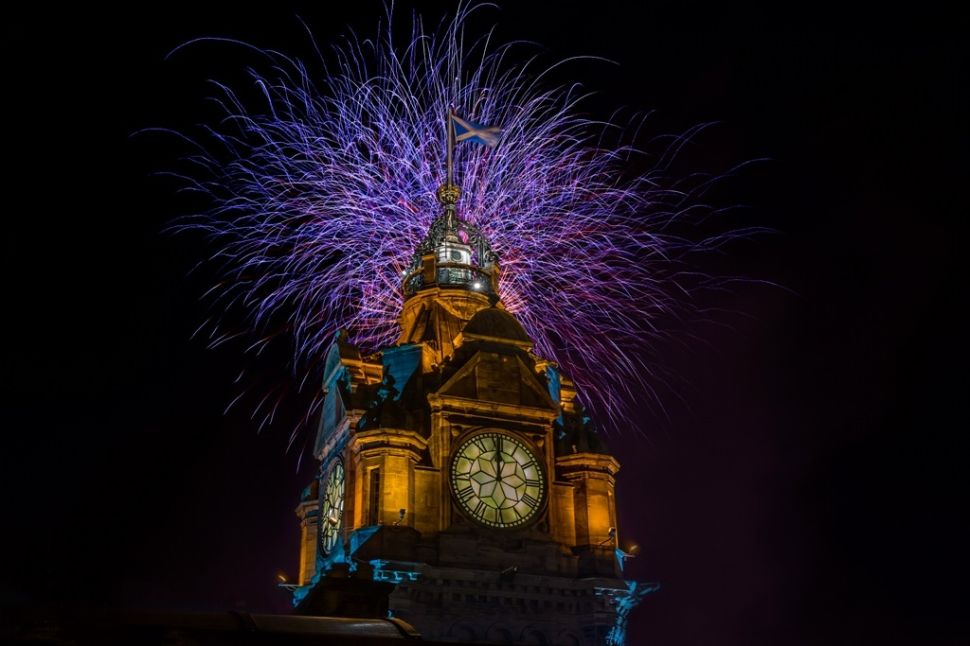