The fab four finally reunited today for a very festive occasion. Prince William, Kate Middleton, Prince Harry and Meghan Markle haven’t been spotted together at an official engagement for more than a month, but the whole crew descended upon Buckingham Palace today for Queen Elizabeth’s annual pre-Christmas lunch.

Queen Elizabeth uses this approximately 50-person luncheon to bring together all the relatives unable to join her at Sandringham, because sometimes, you just don’t make the cut.

Buckingham Palace is feeling the Christmas spirit right now, with fir trees in its marble hall and garland on its grand staircase, so maybe the Cambridges and Sussexes will take a few holiday snaps in front of the decorations.

The actual menu at the private event hasn’t been disclosed, but it’s safe to say it doesn’t include any garlic, which the Queen despises, and definitely does include gingerbread cookies, which are made by the palace’s pastry chefs. And no doubt Queen Elizabeth has indulged in her beloved Dubonnet and gin cocktail.

The Duke & Duchess of Cambridge were spotted arriving at Buckingham Palace today for The Queen’s annual pre-Christmas lunch. Both George and Charlotte have joined their parents this year, as well as their Nanny Maria. The Duchess wore a new pink dress/top and her In2Design Baroque Pearl Earrings ($152). Each year, Her Majesty invites all of her extended family members for a meal at the Palace before departing to Sandringham Estate with Prince Philip, where they stay until the beginning of February. Since Sandringham does not have room for the extended family, a pre-Christmas lunch is held for everyone prior to the holiday. The extended family include the families of The Queen’s four first cousins: Prince Richard, Duke of Gloucester; Prince Edward, Duke of Kent; Princess Alexandra, The Hon. Lady Ogilvy; and Prince Michael of Kent. We usually see them all together on the balcony of Buckingham Palace during the Trooping the Colour ceremony every June. In total, there is expected to be around fifty family members in attendance. Royal Pastry Chefs create thousands of mince pies, sweet treats and canapés for the receptions hosted at the Palace throughout the year – including this special family lunch. You can find recipes of some of the royal chef’s creations on the official royal website! The event is a private, family affair, so we do not get photos from inside the lunch.

Prince William and Middleton drove together with Prince George, Princess Charlotte and, of course, their nanny, Maria Teresa Turrion Borrallo, though it looks like Prince Louis is still too young for the event. The Duchess of Cambridge steered away from the traditional Christmas attire she’s been rocking lately and instead chose a very cheerful long-sleeved pink silk dress.

Prince Harry and Markle arrived separately. Perhaps they came in from the Cotswolds, though soon they’ll have a much longer trek after they make their move to Frogmore Cottage at Windsor. It is Markle’s first time attending the lunch as a member of the royal family; she and Prince Harry had just announced their engagement when she joined the lunch last year.

It’s also the first big event the couples have attended together since the questionable rumors popped up about drama between Kate and Meghan, though royal expert Katie Nicholl told Entertainment Tonight that even though there has “been tension,” it’s nothing major and Prince Harry and Prince William will “have to bury the hatchet.” What better way to do that than over cookies and gin? 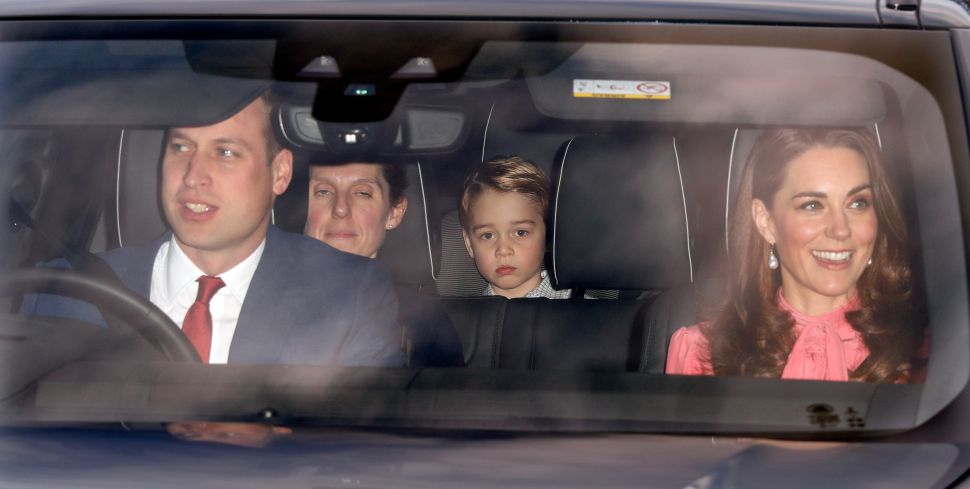