The action in Aquaman takes place in the far corners and depths of Earth, from an island in Maine to Saharan Africa to a place called the Kingdom of the Brine, deep under the ocean.

One extended fight sequence occurs in a picturesque village on the coast of Sicily, the kind of place that’s breathlessly fawned over on travel shows like Rick Steves’ Europe. Here, walls of stately villas are barreled through, terracotta tiles are smashed to bits and plasma rays turn ancient Roman statues to dust.

Seeing all of this culture and beauty laid to waste didn’t bother me until they got to a high-end cafe that was lined floor to ceiling with bottles of wine. I found myself mourning the loss of the product of all of that hard work and viticulture even before its inevitable destruction. Sure enough, a character who can control musters all the wine into projectiles and fires it at some bad guys.

On one level, who cares—Jason Momoa’s New England-raised title character is more of a beer drinker anyway. But on another, using something as delicately crafted as fine Italian wine as just another blunt instrument that ends up as collateral damage in the film’s innumerable smash-ups, sums up what is so wrong with the movie.

Making his superhero debut, horror maestro James Wan (the Saw and Conjuring movies) sadly and consistently chooses dumb spectacle over anything that might be considered shrewd, clever or less than obvious. In other words, there were better ways for him and his pair of screenwriters to use that wine, just as there were better ways to tell the story of the half-human heir to the undersea kingdom of Atlantis taking his proper place on the throne.

That is not to say that the latest entrant in the DC Extended Universe—the RC Cola of synergistic corporate superhero undertakings—doesn’t have its occasional B-movie pleasures. While a few of these are visual (I for one will never cease to find gratification in watching an intricately manbunned Willem Dafoe riding an oversized seahorse, or an octopus playing war drums before a big fight) most come virtue of Momoa’s smirk-and-muscles lead performance.

With his eyebrows carved into a questioning arches and a seemingly permanent half-smile on his face, Momoa recalls the heyday of pumped up ’80s action stars who would offer a moderately clever one liner before tossing a guy through a wall. The Game of Thrones hunk of meat plays everything with a subtext of “Can you believe this shit?” It’s a delicious change of pace from typical superhero earnestness. It also doesn’t hurt that he does all of this while either shirtless in soaking wet jeans, like an Abercrombie & Fitch model, or in body-hugging, muscle-enhancing armor.

But even these pervy thrills are undercut by the way his character is written. With his frequent exclamations of “awesome” and “bad ass,” he talks and acts like a prepubescent sixth-grader trying to crack up the other kids in homeroom. When Atlantis royalty Mera (Amber Heard, sporting a green sequin jumpsuit that looks like something Liberace might have worn to an aerobics class) recruits him to bring peace to the kingdom, which is on the verge of war with the surface dwellers because of their bellicose leader Orm (Patrick Wilson), Aquaman is reluctant to join her. “Your fish ship has been marinating in chum butter,” he says. “We’re going to smell like swamp butt.”

But the real problem with Aquaman is less its oddly written dialogue than the monotony of its rhythms. It quickly falls into a steady pattern of long bits of expository patter that is suddenly interrupted by a big explosion that send characters scattering bloodlessly. (Atlantians’ skin is largely impenetrable to weaponry.) It’s as if the detonations happen at the exact moment where a focus group would say, “Enough yakking,” and it happens over and over again.

But even graced with the charming company of Momoa and Nicole Kidman, who is having a blast playing his high-kicking, otherworldly mother, the timing and tone of this movie is consistently off. A movie this silly—and we’re talking Rocky III strongman Dolph Lundgren in Strawberry Shortcake pink hair level silly—should not be so long, portentous or one-note. Put simply, Aquaman is a fish opera that wildly overstays its welcome. 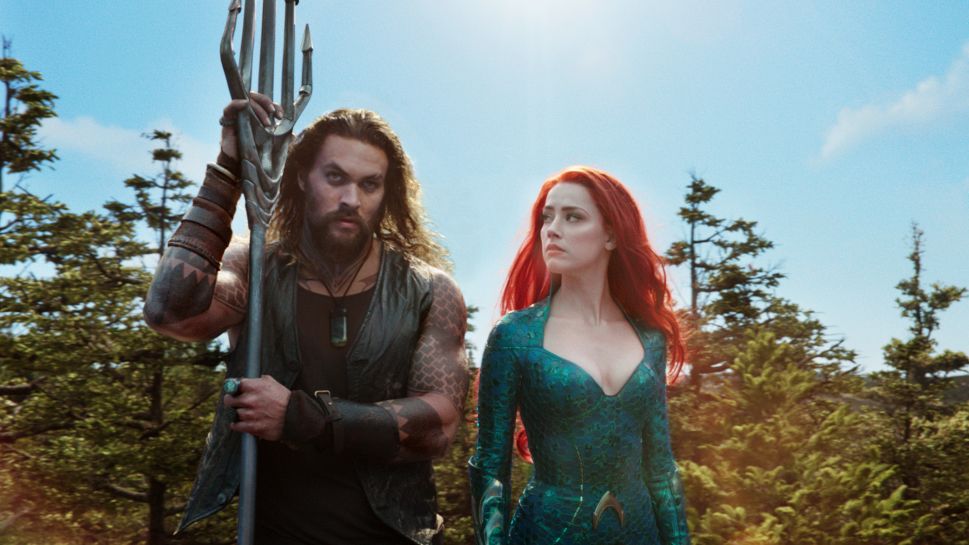