“Which Christmas party are you here for? Because it’s definitely not this one,” a lowly corporate drone at HBO told Observer.

She was quite right: A plethora of parties themed to “Ho, Ho, Ho” were unfolding throughout the Andaz hotel in Midtown on Wednesday evening. But it was the celebration hosted by renegade conservative startup network Newsmax that was the most colorful, bringing together a rogue’s gallery of disgraces and has-beens for bite-sized lobster rolls and musings on tribalism. Such tarnished dignitaries included Bill O’Reilly (ousted by Fox News over serial sexual harassment), Jeffrey Lord (fired by CNN after tweeting the Nazi slogan “Sieg Heil“) and Sam Nunberg (under investigation by the special counsel’s office over the question of Russian collusion).

The highlight of the evening came when The Wrap’s Jon Levine was thrown out, prompting the media reporter to tweet of his banishment.

“Some Chris Ruddy goon just threw me out of the Newsmax holiday party,” wrote Levine, referencing Newsmax’s CEO. “I am told they were unhappy with a story I wrote about them.”

The piece in question involves Newsmax host Jack Burkman, who received his own FBI investigation for Christmas after attempting to pay women to come forward with false rape accusations against Robert Mueller. Although the special counsel’s office declined to comment about the status of Burkman’s probe—instead referring Observer to the FBI—a Newsmax editor did clarify why Levine was kicked out.

So I’m resharing it here … please don’t retweet this https://t.co/7I0DT9QN1m

“It was a private Christmas party, invitation only, and Jon was not invited. We are not commenting beyond that,” Newsmax’s executive editor Ken Chandler told Observer.

Levine claimed he was a plus one, but kept the identity of the invited guest off-record to protect his friend’s relationship with the company.

Not all media parties this holiday season have been overshadowed by the Justice Department. While the Andaz drew Trumpland D-listers, Freds at Barneys became a Mount Olympus for the titans of the mainstream press on Thursday evening. Celebrating Mediaite’s ranking of the most influential figures in news media, D.C. and Manhattan vanities partied like it was the White House Correspondents Dinner, toasting to one another’s placement on the list amid a low hum of top 10 hits.

George Stephanopoulos (clocking in at number eight on the powerhouse ranking) mistakingly thought the party started at 6:00 p.m. (rather than 6:30), and spent the first 30 minutes answering questions in front of Mediaite’s step and repeat. Meanwhile, CNN president and fellow early bird Jeff Zucker (ranking #2) chatted with Mediaite founder Dan Abrams—the latter of whom has vaulted in recent years to an overlord determining one’s relevancy in an industry based off an ad revenue and page view model.

While Zucker, Stephanopoulos and TV personalities Don Lemon (#10), Megyn Kelly (#25), Jim Acosta (#7), Brooke Baldwin (#66), and a sweater casual Ari Melber (#53) orbited the floor at their own free will, the evening’s real star found his every move carefully monitored.

Guarded by a phalanx of Fox News flacks, presumably to protect him from himself and the possibility of getting James O’Keefed by a rogue journalist, Sean Hannity (#1) met with those beneath him one-on-one. An agent at a major talent agency, who confessed to watching Hannity every night, claimed the Fox News host asked him if he wanted a photo.

“He probably thought I was a fame-whore,” said the agent after meeting his hero, gesturing to the spectacle unfolding across Freds. “I grew up around this, so it doesn’t impress me.”

As was the case at Newsmax’s party, Levine’s presence was a slight nuisance to the evening—Abrams sued the reporter‘s current company after he broke his non-compete contract with Mediaite last year. But Abrams let him stay, as an act of charity and a display of his own power over the evening. 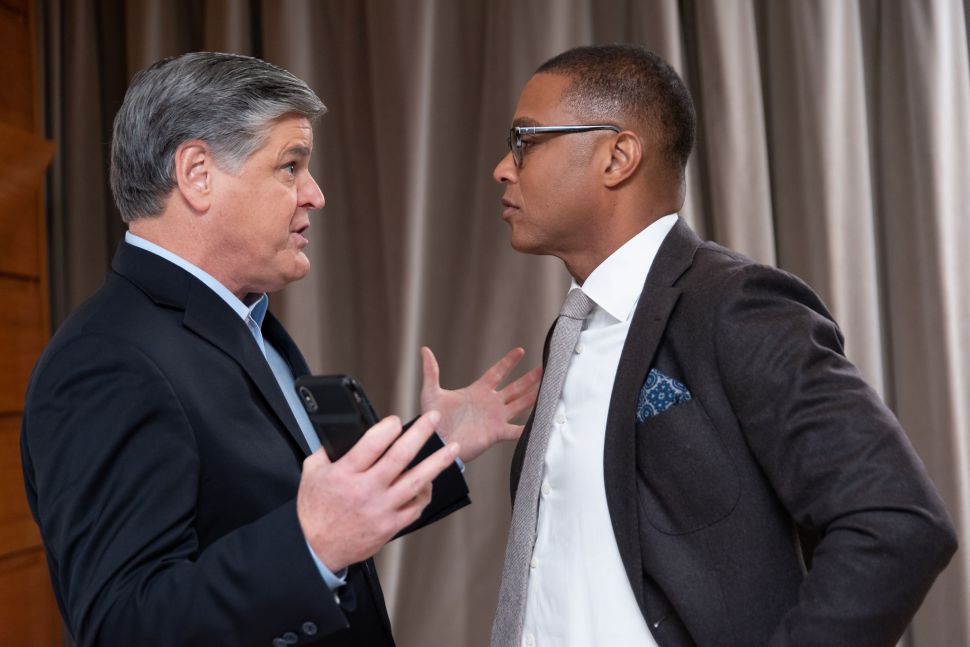