“It never entered my mind to be shocked,” Sister Wendy once said to Bill Moyers when he asked her if all the nudes and carnal passions she observed in art ever offended her. The Roman Catholic nun and famed art historian never shied away from discussing erotic themes with equally as sensual language, which may have contributed to the popularity of her BBC documentaries Sister Wendy’s Odyssey and Sister Wendy’s Grand Tour. But perhaps more important than the novelty of a pious nun speaking candidly on sex was the progressive lens Sister Wendy offered at a time when 1990s-era censorship had taken a larger role in creative discourse.

On Wednesday, the Carmelite Monastery in Quidenham, England announced that Sister Wendy Beckett had died at age 88. A practicing hermit before she was discovered, the unlikely celebrity would often have to defend her candid speech and the suggestive themes of the art she showcased.

These challenges came to a head most notably in her 2000 interview with Bill Moyers for PBS, in which an oft-shocked Moyers marvels at a nun’s ability to speak “unselfconsciously” about representations of sex, nudity and carnal passion as though she had taken a vow to not recognize the human condition. “We’re made in the image of God,” Sister Wendy reminds him, faithfully. “There’s nothing amiss in any part of the human body.”

By 2000, this was a bold departure from the fervent censorship that was en vogue in American politics for over a decade prior. In 1985, Tipper Gore founded the Parents Music Resource Center (PMRC) with Susan Baker, wife of United States Secretary of the Treasury James Baker, an organization that made massive strides in the ’90s to encourage parental warnings and raise consumer awareness against any art that contained explicit content unsafe for children. When pressed on the issue of censorship, Sister Wendy broadcast an alternative viewpoint to an American audience, which often cited religious ideals to encourage content guidelines:

“To me, it’s very illogical. God made the body. And this suggests that God made certain mistakes about certain parts of the body. You know, that, unfortunately, ‘He’s done these shameful things and we must do our best to cover them up.’ This is not the faith.”

Sister Wendy’s matter-of-factness about art and sex makes Moyers look puritanical at times, who cites “the loss of boundaries, or principles, of tradition, convention, order” as what’s wrong with the 20th century. Clinging to a sense of respectability, he sometimes patronizes her (“Surely, you understand, you’re a sophisticated woman,”) and tries to shame her when he asks, “What would the nuns in your convent think if they heard you discussing the naked little slave girl in the tomb of Ramses, […] or where you compare the breasts of the matron to the firm little apples of everyone else?”

“Well they will see it!” Sister Wendy corrects him with a laugh. “They’ll think as I think, that this is quite a good description of the bodies we’re looking at. None of the sisters have ever raised an eyebrow at anything I’ve said or written, because they’re not cramped by this false idea that sexuality is something wrong.”

In 2000, the American media needed a firm reminder from a Roman Catholic nun that sexuality isn’t wrong. “I delight that people have it,” she explained, “it’s just not a gift for me.”

But perhaps the most revolutionary aspect of this interview is not her defense of the human body and its many conditions, but her theory on “comforting” art and why it must be avoided. This becomes evident when she famously defended Piss Christ, the 1987 photograph by artist Andres Serrano, which depicts the crucifix in a jar of the artist’s own urine. The image was so controversial that 13 years later, it was still a topic of discussion regarding its artistic merit.

“I thought he was saying, in a rather simplistic, magazine-y type of way, that this is what we are doing to Christ, we are not treating him with reverence. His great sacrifice is not used. We live very vulgar lives. We put Christ in a bottle of urine—in practice. It was a very admonitory work.”

After insisting—multiple times—to Moyers that she found the work neither offensive or blasphemous, she belied that her only concern for the work was that it might be too comfortable. Moyers was clearly flabbergasted that a work so controversial could be defined as comfortable until Sister Wendy described for him the point of varying one’s lens on contemporary art.

“There’s quite a lot of art that gives that instant satisfaction, of feeling that ‘I know that I can judge this,’” she explained. “Without having to look, without having to take trouble, I just know because it’s so obvious, is comforting art. Whereas you see, real art makes demands.”

By that description, Sister Wendy may have salvaged Piss Christ from the comforting category, if only because she presented a new way in which to view the controversial work and demanded a second interpretation from its viewers. Her perspective was a welcome voice of reason in an era obsessed with censorship, and one that not only defended human sexuality but encouraged a versatile lens. 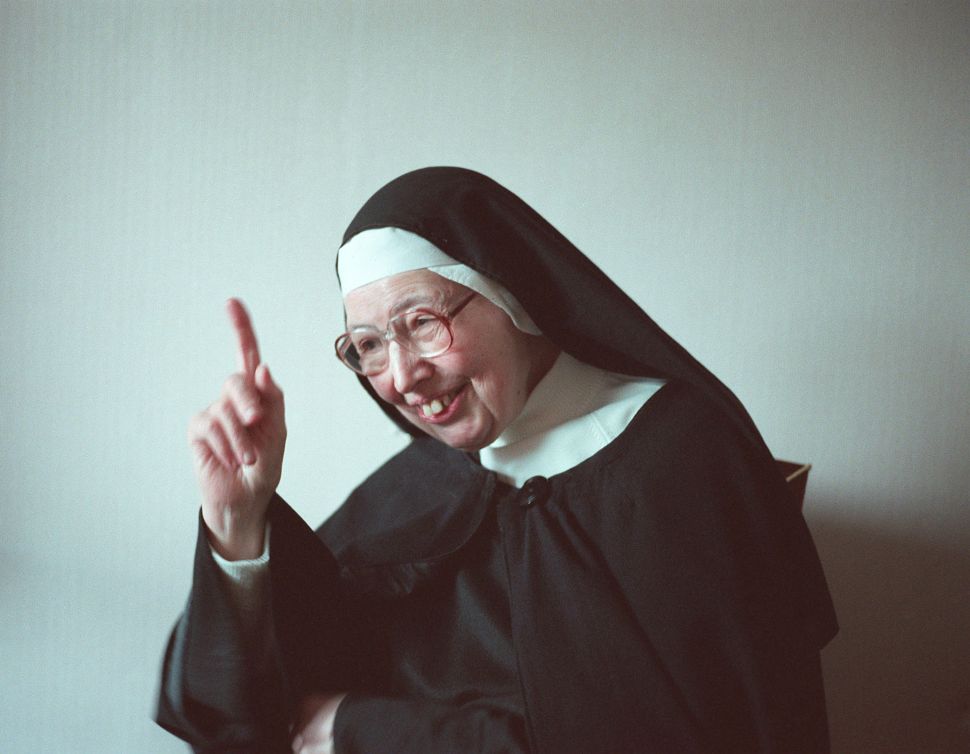