Arielle Charnas’ biggest fear is disappointing her 1.1 million Instagram followers. When she says this, the 31-year-old founder of the style blog Something Navy swells with tears. “I don’t really know what about,” Charnas says. “But anything that would let them down.”

At the moment, there doesn’t seem to be much cause for concern. After signing a multi-year licensing agreement with Nordstrom, the Instagram influencer’s back-to-back collections this fall became the retailer’s most successful partnership ever—driving an estimated $5 million in single-day sales and beating past collaborations with Beyonce and Rihanna. Her line has been such a smash hit that co-president Pete Nordstrom, fourth-generation heir to the Seattle-based empire, had to apologize for the “high-quality problem” of supply not meeting demand. “We’re testing the limits and the boundaries of anything we’ve ever done online,” he explained.

With each new collection, the unprecedented traffic of Something Navy followers has crashed Nordstrom’s website. On December 13th, that same rabid fanbase will return again for a holiday installment of leather jackets, sequin tops, cashmere sweaters and costume jewels that Charnas has been hyping for weeks on Instagram. All signs point to another instant sell out.

Charnas dashes through Instagram in safe, uncomplicated, “elevated” basics, filling her feed with an approachable mix of beauty, family, fitness and fashion—all wholesome, unfussy and flawlessly styled. It’s a formula that reaches across generations, from women ages 13 through 60, to whom Charnas seems to whisper “You can wear this, too” as she smiles with giant, expressive eyes. And of course, now they do. When Charnas posts the details of whatever she’s got on, her fans buy big. On Net-a-Porter alone, more than three percent of Something Navy followers who click through purchase items, or “convert,” spending an average of $700 per person. It’s one of the reasons Charnas has been called “the future of fashion.”

Seven days a week, she is the center of a universe humming with dewy twentysomething employees who post candid-ish shots of Charnas, then erupt in squeals as the likes, follows and comments soar into the tens of thousands.

When we meet in the Madison Square Park loft she shares with her husband, Brandon, and daughters Ruby and Esme, Charnas is teetering on the edge of a bar stool getting her makeup done. The hard angles of her thin frame are softened by a waterfall of hair so shimmery it earned her a TV spot with TRESemmé in 2015—and more than 300 other deals since. Yet despite all the success, Charnas tells me she won’t be satisfied until she’s “the next Tory Burch.”

“Where you see someone, you see a group of people on the street, and you can tell that they’re in—that they are Something Navy,” she says between flashing big white smiles for the camera. “That’s when I’ll know I’ve made it.”

Charnas started Something Navy in 2009 as a Blogspot of fuzzy editorials in the “prettiest, sexiest, coolest outfits”—mostly to impress a boyfriend who wound up dumping her anyway. Then 22 and desperate to work in fashion, Charnas had been turned down by every major magazine (nearly all of which have now profiled her). So she found a job in retail, earning just enough to rent a windowless alcove in her sister’s one-bedroom apartment—and some leftover cash for clothes. On days off, she took pictures, styling her fast fashions—Forever 21, H+M, Aldo and Steve Madden—with designer vintage pieces she borrowed from her mother.

Within months, a fashion journalist named Karen Robinovitz took notice and offered to connect Charnas to fashion brands looking for nontraditional partnerships. Her first “paying” gig from the blog was with Saks (she earned credit in shoes in exchange for blog posts featuring Saks products). In 2010, when Robinovitz started what would become the very first digital influencer marketing company, Charnas was among her first clients. With thousands of women visiting the site every day, Something Navy was no longer a project rooted in breakup revenge. It was a destination—and a burgeoning lifestyle brand. “I didn’t need a boyfriend, I didn’t need anyone,” says Charnas. “I felt strong.”

Still, since moving the blog to Instagram in 2013—where she amassed more than 250,000 followers in less than a year—Charnas laments that’s she’s had to be “on every second.” The pressures of living in a Truman Show of one’s own making are… exhausting.

“Sometimes I wish I could be a little more private” she says as a pink-lipped photographer snaps her every movement. “Just not always having to share my life and have everyone know everything about me and my family. I have moments where I’m like, Why am I posting that my child has moved into a big girl bed? Because then I get a million messages saying ‘You shouldn’t do that at this age!’ And I get annoyed. I do like sharing my journey, and it makes me happy, but I don’t ever really think about what comes with that.”

Charnas can’t take a vacation, or a sick day, or even have a baby without inviting her fans along for the ride. And if she did? “My followers would be really upset,” she says. “They feel like they are almost owed every second.”

After giving birth to her second daughter this summer, Charnas didn’t take maternity leave—the birth announcement was her most-liked post ever, spiking engagement rates to seven times what the influencer market considers good. “I thought, by the time I had babies, my super-young followers would be gone. But the 15-year-olds are nuts about my children,” Charnas shrugs. “They are obsessed.”

That intense level of fandom often leads to real-life engagement, too. Strangers feel entitled to approach Charnas, on sidewalks and in restaurants, embracing her like a friend they’ve known for years. They ask about the kids, or where to find “that coat,” or tell her she’s too thin or that it’s time to cut her hair. It might be why the idea of disappointing them makes her cry.

Charnas says she also worries every single day about the people she actually knows—in her personal and professional life—and why they might be orbiting her. “Could it be for the wrong reasons?” she ponders out loud. “Definitely.” She knows they don’t have malicious intent, but still.

“I don’t have any friends because of it,” she says. Apart from her sisters, her staff, and a handful of women she’s known since childhood, Charnas says, “I don’t really need friends. And I always have my guard up, because I know there are definitely girls who are friends for the wrong reasons.”

Those within Charnas’ tight-knit circle reap the very measurable and commercially profitable benefits of proximity to a super-influencer: their own growing social footprints. It’s a phenomenon that everyone around her excitedly refers to as “The Charnas Effect”—except for Charnas herself.  Jane Roggen, former COO of Something Navy, says it’s one of the reasons they never hire anyone who has their own blog. “We don’t want them using Arielle to promote themselves.”

All of the women who work for Charnas have seen their social followers skyrocket, and some have earned paid partnerships because of it. That includes at least one of her sisters, a beauty blogger who recently walked Allure readers through her $32,000 makeup stash. Charnas’ other sister uses Instagram to showcase her styling portfolio. But the most unabashed recipient of Charnas’ residual celebrity is without question her husband, Brandon, a commercial real estate broker who proudly attributes his professional success to having leveraged his wife’s social media.

“People will hire me because she’s given me an audience,” he says, buzzing around the apartment at a pace that matches his words. “One in four females ages 24 to 36 in New York follow me. Because of her!”

Brandon is co-founder of Current Advisors, a company that “creates value for clients through a disruptive way of thinking”—which means finding tenants for unoccupied, ultra-prime retail storefronts at record speed, often by promising prospective lessees that his wife will show up and Instagram. He’s also brokered deals for brands with whom she has relationships. In March, Brandon represented women’s activewear label Bandier in a 27,500-square-foot lease agreement on Bond Street in NoHo. Charnas is a Series A investor in the company, which, Brandon says, “is probably valued now at $100 million bucks.”

That partnership began in 2014, when Charnas randomly posted a selfie in a pair of Bandier leggings her mother gave her. The next day, Bandier’s co-founder and CEO Neil Boyarsky was on the phone. “Who are you?” he asked. They’d just sold through their entire stock. Boyarsky wanted to pay her to keep posting, but at her husband’s urging, Charnas asked for equity in the company instead. “When she posts we see a 300 or 400 percent increase in the sale of whatever it is that she’s selling,” Boyarsky explains. “She’s not too high-end fashion that people feel alienated.”

According to Brandon, his wife’s off-the-charts conversion ratio comes down to one simple equation: Her followers think “Arielle is their friend,” he says. “That’s the key.”

“I read every single comment and DM,” Charnas says. “Every single one. I don’t respond to all of them, not because I don’t want to, but just because it would take so long. And I don’t want to give that job to someone. Because it’s not me, you know?”

Through 2019, Something Navy’s offerings will continue to expand—into children’s wear, travel gear and accessories. Charnas might even make the jump from Instagram to TV, if the right opportunity presents itself. Which could be sooner than anyone thinks. As Charnas and her husband head out the door for their next appointment, Brandon glances back my way. “Are you coming to the meeting with Bravo?” 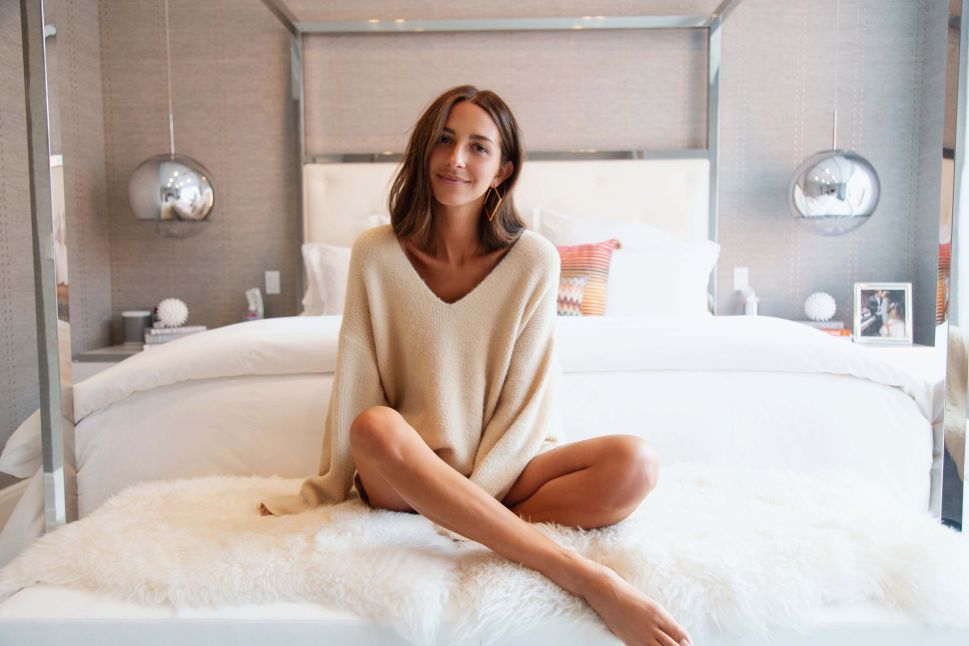