Saint Barthélemy was hit hard by hurricanes in 2017, and many of the island’s beloved hotels and restaurants were forced to shutter for at least a season. But while some are still being rebuilt, plenty have recovered and are reopening their doors for business. David Zipkin, co-owner of Tradewind Aviation, which operates between 15 and 30 shared charters a day from San Juan and Antigua to the island, told The New York Times earlier this year that business was booming and that St. Barths’ inhabitants are forging ahead. “The island is beautifully green, and there are people out and about in the stores and restaurants and on the beaches,” he said.

This winter is the perfect time to revisit some of the Caribbean paradise’s classic hotels, which have bounced back remarkably well, and also explore some of its excellent new additions. Here are our favorites.

Hotel Christopher reopened in October after a year-long closure due to Hurricane Irma and is available to book right away. The Preferred Hotels 42-room stay on Pointe Milou also has a new restaurant, Christo, which features dishes by chef Nicolas Tissier, and it also sports a redesigned swimming pool. Those planning a trip for 2019 can choose from three new villas launching next year, but the lucky few who make it before the new year should take advantage of Sisley Spa. It now offers a lomilomi massage, which emulates the sounds and movements of waves (and sounds very Gwyneth Paltrow). Rates from $512, Hotelchristopher.com.

Beachfront hotel Le Sereno reopened December 1, so it’s ready for end-of-year stays. After the hurricanes last year, major parts of it were demolished, but they’ve been redesigned by Christian Liaigre, who overhauled a number of rooms and public areas (many of the rooms are larger now and have a new layout). The Leading Hotels of the World spot, situated on Grand Cul-de-Sac, has also increased the number of rooms from 36 to 39. There’s a new spa, fitness facility and restaurant, Restaurant Le Sereno, as well as a new boutique on the way. Rates from $865, Lesereno.com.

When it launched in October 2016, Le Barthélemy was the first new hotel in St. Barths in 20 years. It closed for renovations after Hurricane Irma, but the waterfront stay—just down the beach from Le Sereno—returned at the end of October. It boasts 44 airy rooms, two villas and an incredibly Instagrammable infinity pool. It wellness haven, Le Spa, uses only La Mer products, contains a hammam and offers hydrotherapy. After you decompress there, you can hit up its recently opened restaurant, Aux Amis Beach, and its charmingly named rooftop bar, Whiskey, Tango, Foxtrot. Rates from $800, Lebarthelemyhotel.com.

The Hotel Manapany was already closed for a major renovation when the hurricanes hit, but it reopened as part of B. Signature Hotel Group in March this year and officially launched post-hurricane season on November 15. Located on Anse des Cayes, the five-star, 43-room resort has a new, more sophisticated farm-to-table eatery in addition to its current beachside spot Manapany Restaurant. While this stay is going for an “eco lodge” vibe—it doesn’t allow any plastic, produces all its own and provides hotel towels made of bamboo—it’s still St. Barths, so you’ll hardly be roughing it. Rates from $620 to $4,600, Hotelmanapanystbarth.com.

This 25-room hotel, perched above Flamands Bay, is another new arrival in St. Barths; it first popped up in April and reopened for the season in November. French hotelier and interior designer Jocelyne Sibuet (of Maisons & Hotels Sibuet) created its breezy aesthetic (pink coral and seashell accents, touches of bamboo and wood), and the hotel is composed of bungalows and two brand-new villas, Villa Saline (from $1,530) and Villa Colombier (from $1,980). If you really want to splurge, go all out with the latter—it has two bedrooms, canopied beds, a private pool and a framed Slim Aarons photograph hanging on its wall. You can unwind with After Sun jasmine treatments and Himalayan Rose regeneration at Pure Altitude Spa, and savor French and Caribbean dishes like homemade foie gras and linguini with blue lobster at Francois Plantation Restaurant. Rates from $400 for a bungalow and from $1,530 for a villa, Saintbarthvillamarie.com.

Cheval Blanc reopened on December 1 with 41 rooms and villas. The millennial pink–tinged hotel on Baie des Flamands has always had an upscale vibe, even among other ritzy spots on the isle, and now interior designer Jacques Grange has given it a little extra love. Its printed chairs with wicker legs juxtapose nicely with its white couches and dark wood-accented furniture for a chic Caribbean maison feel. Cheval’s signature restaurant, La Case de L’Isle, and its more casual dining spot, La Cabane de l’Isle, have returned, as have its trademark pink towels—the perfect accessory for beachgoers thrilled to see St. Barths on the mend and as gorgeous as ever. From $820 in the low season, Chevalblanc.com. 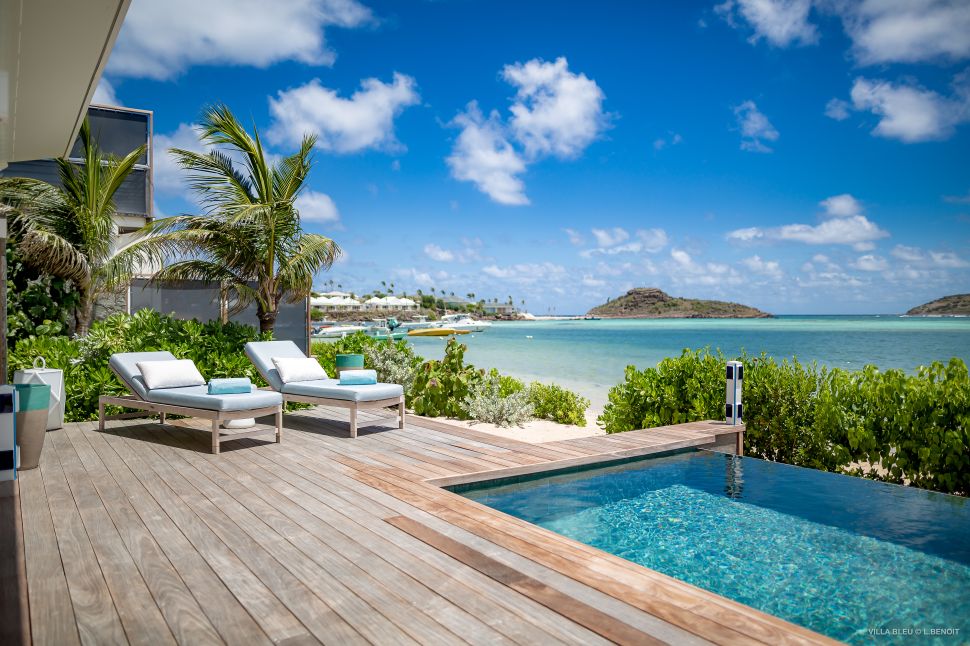