The Polish artist Stanislav Szukalski was in his 80s and living in Granada Hills, at the western end of the San Fernando Valley outside Los Angeles, when he was rediscovered in 1971. It was out of the blue. As the story is told in Netflix’s Struggle: The Life and Lost Art of Szukalski, a local collector named Glenn Bray, who had picked up an old book of Szukalski’s work by chance and quickly became obsessed, discovered that the man behind it lived within driving distance.

It also turned out that Szukalski was a talker and enjoyed an audience. So Bray started inviting over other artists, friends from the local underground comix scene, to sit and listen to the old artist speak. One of those people was George DiCaprio, who used to bring around his young son, Leonardo. One day, Szukalski took the family’s copy of a monograph and added an inscription for the child. “A warning,” he jotted down in the front cover of the book. “Please do not grow up too fast.”

Advice that was probably not heeded. But nevertheless, Leonardo DiCaprio, like many others, has remained interested in Szukalski, even long after the artist’s death in 1987. The actor is a noted collector of Szukalski’s sculptures, and contributed funding to a retrospective of his work at the Laguna Art Museum in 2000. Now, he serves as a producer along with his father on the documentary—the work of director Irek Dobrowolski—which tells the story of Szukalski’s troubled life and complicated body of work.

Szukalski’s sculptures and drawings were dramatic, monumental, surreal. The title of the film comes from one of his best known works—a tense, sinewy hand with eagle heads emerging out of the fingertips—but also substitutes for the overarching theme of his life. Born in Warta in 1893, he was shuttered back and forth between Poland and Chicago during his childhood (studying art at Kraków’s Academy of Fine Arts in the former, becoming teenage friends with future screenwriting legend Ben Hecht in the latter). Something of a split-personality developed. Some describe him as tender, inviting; others say he was stoic and cold. His antics as an artist—really as an anti-artist, criticizing whatever institution stood in his way—made him popular fodder in the local press, where he embraced the enfant terrible persona.

This penchant for trouble is in many ways his main attraction. Stripped of context, his work is wild, his ideas even more so. He was a lost kook and surly troublemaker, a hero for the underground to stand behind. Robert Crumb included his work in an issue of Weirdo, and artists like Jim Woodring and Robert Williams embraced his strangeness.

By the time these younger artists encountered Szukalski, he was spending less time on work and more of his energy on the theory he called Zermatism, a twisted pseudo-scientific rewriting of human evolution that involved convoluted ideas about mankind deriving from Easter Island and the existence of a half-Yeti race responsible for all the horrors of the world.

Many of his new followers did not know what to make of his theories and, it seems, did not want to think too deeply about the connection between them and the work. But the film posits that the closer you look at Szukalski’s artistic output and find out the truth about his backstory, the more you can see their troubling links. The nationalistic undertones of the work and his affinity for mythological megalomania—Szukalski tended to view himself as a god-like figure of the arts—have direct roots in the parts of his life that are intertwined with 20th century fascism.

Struggle, then, becomes less of a film about Szukalski’s work than about legacy. Can we separate the art from the artist? It doesn’t land on a simple answer. Szukalski’s memory conveniently lapsed when it came to the thornier aspects of his life. This, coupled with the fact that his work has been absorbed over time into dangerous strands of ultra right-wing movements, especially in his home country of Poland, makes the question trickier. Was Szukalski lost to time or in exile?

The film’s title acquires new meaning. Szukalski’s struggle is represented in his work, but the ultimate struggle seems to be on the part of those involved in the film. For those people in his life—both Leonardo and George DiCaprio, Glenn Bray and others—it is hard to settle on a personal relationship that has become more complex. A large part of their life, someone whom they considered a friend, was not exactly who he seemed. The memory has shattered. What do you do with the pieces? Some embrace the jagged edges. Others, it seems, would rather put it back together and pretend like it never happened.

Struggle: The Life and Lost Art of Szukalski debuts on Netflix on December 21. 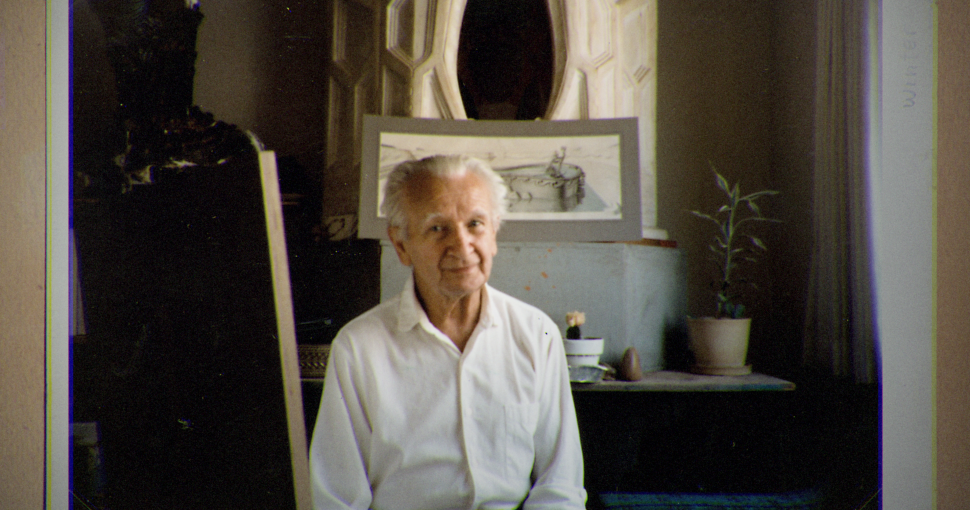