The British love warm-hearted movies about group efforts that celebrate national pride and camaraderie. Think The Full Monty, Calendar Girls and Welcome to Debenham. A new one called Swimming with Men is a feel-good enterprise about friendship and morale-boosting among men facing individual mid-life crises in their monotonous, humdrum lives who discover new strength and meaning at the local swimming pool when they join an all-male synchronized swim team. There is nothing remarkable or consequential about it, but it’s not a waste of time, either.

Like the unemployed Sheffield steelworkers who took to male stripping in 1997’s The Full Monty, the shapeless blokes in this slight but sweet story of approaching seniors with spunk (and problems to spare) include an unhappily married accountant (Rob Brydon), a gay dentist (Adeel Akhtar, Judi Dench’s co-star in Victoria and Abdul), a divorced loner who lives on a boat (the terrific Rupert Graves), a grieving widower (Jim Carter), and a failed football player turned construction worker (Daniel Mays). Every walk of life. They’re neurotic, likable and out of shape. “The wheat intolerant Village People,” one onlooker calls them.

Inspired by the 2010 Swedish documentary Men Who Swim, director Oliver Parker invests his oddballs with specific charms that keep the film afloat. The men thrash and thump their way through the like over-fed porpoises. Laps are tantamount to bar exams. But we get to know them so well that by the time they find their way into the kind of inevitable world competition championship that invariably waits at the finale of every film like this, you’ll be cheering them on like favorite uncles.

The actors are funny and needy and deserving of applause. The roles they play are hardly memorable, but the synchronized underwater routines they learn to perform at the big show in Italy are nicely photographed and reminiscent of those splashy spectaculars Busby Berkeley used to think up for Esther Williams at MGM. Swimming with Men doesn’t tackle the plight of middle-age in any relevant new way, but even though it’s not a great film, it’s not a waste of time. Oddly enough, it’s been playing on airplanes for months. Catch it now, on dry land, before they empty the pool. 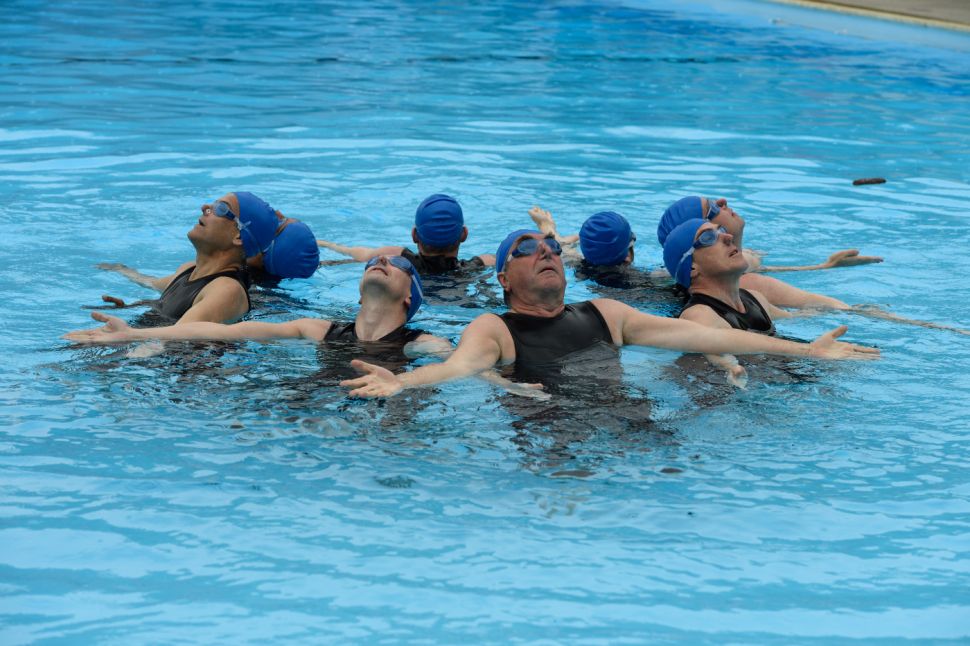