Since the very first issue of the New York Observer, Rex Reed has been our movie critic, reliably delighting with his sharp-tongued reviews of “the truckload of mediocrity that passes for culture these days.”

For 15 of his 31 years with this publication, Rex reported to Peter Kaplan—Observer’s longest-standing editor in chief, who was either a genius or a god, depending who you ask. “His bold ideas made The Observer a sassy, pungent and, above all, literary must-read, populated by writers with fresh voices, courage, talent and balls,” Rex wrote. “Peter Kaplan knew the value of what many editors overlook—the sense to give his writers space and when to back off… Future generations will listen.”

You don’t edit Rex Reed. You check names, fix typos and delete spaces. But mostly you let Rex be Rex. This is what I told The New York Times in January, when they wanted to know how we could possibly defend all the uniquely colorful things he says about people: “Rex Reed isn’t for everyone.”

But those of us who Rex is for? We’d never change a thing. Like dopamine fools, we cling to his words, counting patiently down to our next Rex Reed fix. For now, here’s his best of 2018.

Rex, on Joaquin Phoenix as a schizophrenic drunk murderer: “Not my bowl of campfire cowboy chili.” The Sisters Brothers ★★ (2/4 stars)

Rex, on making money: “Most sequels, prequels and remakes have some vague reason for justifying their existence. Not the Jurassic Park-Jurassic World franchise… Still, they keep turning them out faster than a gerbil procreates.” Jurassic World: Fallen Kingdom ★★ (2/4 stars)

Rex, on what’s not scary: “It just lays there, like leftover pumpkin.” Halloween ★★(2/4 stars)

Rex, on other people’s feelings about Bradley Cooper: “The fawning critical slobber being dumped on this film, while not exactly misguided, is still very much out of synch with reality. One moron in Chicago even calls it ‘the greatest Star is Born of all time,’ which is not only ridiculous but a bald-faced lie.” A Star Is Born ★★★ (3/4 stars)

Rex, on Shailene Woodley lost at sea: “I’m a sucker for believable, beautifully made, and paralyzingly suspenseful epics about brave people in the middle of the ocean battling overwhelming odds against nature to stay alive, but rarely have I seen one that can hold an audience hostage like Adrift… Every element is so perfect that it left me shaking and devastated.” Adrift ★★★★ (4/4 stars)

Rex, on what the hell happened to Jim Carrey: “Once a revered comedian with a big fan base, Carrey hasn’t made a good movie in 10 years, and the ones he’s in have been box-office bombs. Now he’s turned to drama, and like an army of funny men who tried it before, hoping for new respect as a serious actor from both critics and audiences, he is advised to brace himself.” Dark Crimes ★ (1/4 stars)

Rex, on why he needs to take a bath: “Mumbling incoherently and looking creepier than usual, Matthew McConaughey appears to be no stranger to cryogenics, thawed out in a microwave at room temperature.” White Boy Rick (0/4 stars)

Rex, on how not to make a musical: “Edited with a blowtorch, on the rare occasion when anything resembling a scene threatens to amount to something, the dominant theme emerges again: When in doubt, sing another terrible song.” Mamma Mia: Here We Go Again (0/4 stars)

Rex, on why Melissa McCarthy is okay now: “She completely disappears into the character and personality of Lee Israel—age, stringy masculine hair, sardonic grimace, reading glasses and all—with a range I never dreamed possible.” Can You Ever Forgive Me? ★★★★ (4/4 stars)

Rex, on all it takes to be better than ‘La La Land’: “The camerawork is restricted largely to punishing closeups of Ryan Gosling’s lips and eyelashes.” First Man ★★★ (3/4 stars)

Rex, on who’s hotter: “Henry Cavill is actually more handsome than Tom Cruise—calendar material, close-up ready, and charismatic enough to have already played Superman. But he’s no match for the eternally youthful star with good hair, taut workout abs, tight T-shirts and all the best camera angles, busily dispensing endless intensity without ever breaking a sweat or learning how to act.” Mission: Impossible—Fallout  ★★★ (3/4 stars)

Rex, on self-elected sex slaves: “They’ll do anything for a new pair of nipple clamps.” Fifty Shades Freed ★ (1/4 stars)

Rex, on fleeting shame: “If you’re foolish enough to sit through this fiasco, you will hate yourself in the morning.” Bad Times At The El Royale ★ (1/4 stars)

Rex, on what to expect when you’re expecting: “The misery, the pain, the vomiting, the catheters, the endless dirty diapers, the all-night crying and pooping from the nursery.” Tully ★★1/2 (2.5/4 stars)

Rex, on the upside of a low bar: “I went to Mean Girls, the mindless new Broadway musical version of the stupid, tasteless 2004 film (both written by Tina Fey, who proves she is not above trashing her talent to make money) expecting vulgarity, eardrum-endangering screeching from an array of nerds and floozies wearing ugly purple and pomegranate-red costumes, boring songs about angst, sex and teenagers behaving badly, and an interminable armory of smart phones, laptops and brainless texting—and that’s exactly what I got.” Mean Girls The Musical (0/4 stars)

Rex, on Margot Robbie’s mistakes: “Assuming for a second that anyone will ever pay real money to see it, what they’ll get is a turgid, pretentious, and incomprehensible existential joke.” Terminal (0/4 stars)

Rex, on what makes other people happy: “Another app, a pair of shoes, a two-for-one special at Burger King, or a crappy Broadway musical like Pretty Woman.” Pretty Woman The Musical (0/4 stars)

Rex, on our eroding Democracy: “The remarkable thing about Michael Moore—the reason he’s become the most famous and successful documentary filmmaker in American movies today—is the tireless passion with which he assaults injustices and wrongdoings with a never-ending sense of humor.” FAHRENHEIT 11/9 ★★★ (3/4 stars)

Rex, on bad investments: “All you can do is wonder where they get the money to finance all this junk.” Don’t Go ★ (1/4 stars)

Rex, on what time is doing to Liam Neeson: “Turning a once-notable actor of range and quality into a scowling, over-the-hill action hero.” The Commuter ★★ (2/4 stars) 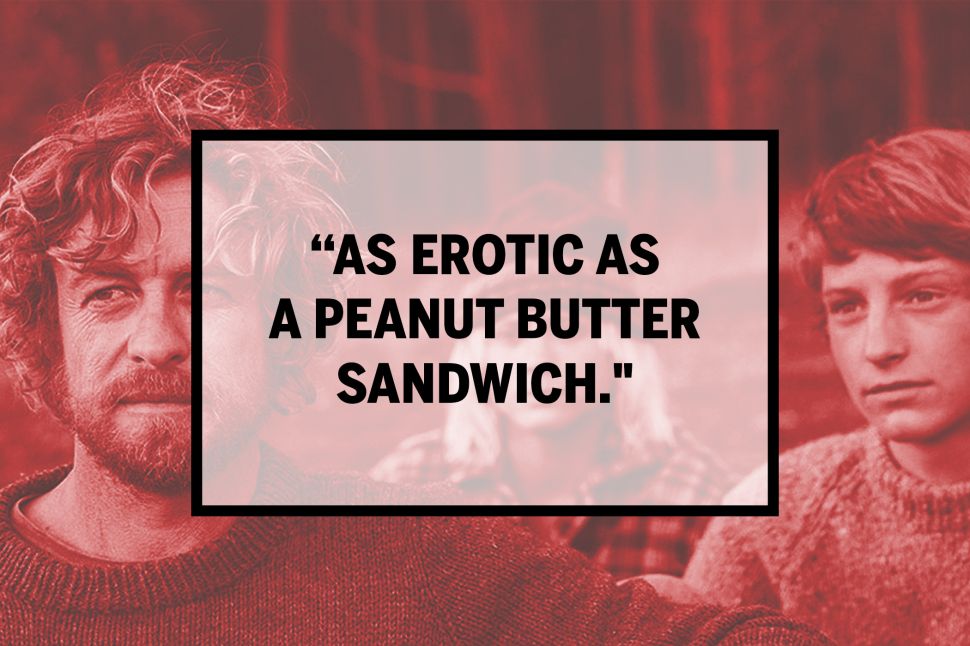