If you study the credit page in the program for Clueless (as some of us are paid to) you will have questions. As in: Who did the music and lyrics? Why no book writer, only “Screenplay by Amy Heckerling”? We already knew the show is based on Heckerling’s deliriously brilliant 1995 teen comedy. But this is theater, not Alamo Drafthouse. Even if I dearly wished the opposite.

See, this version of Clueless is, technically speaking, a “new musical,” in the sense that characters break into song and dance. But not in the sense that the music is new or was written with these particular lyrics in mind. Heckerling and director Kristin Hanggi chop up the screenplay and insert pop hits from the Clinton Era, retro-fitted with language that relates to the story. And so, Beverly Hills teen princess Cher Horowitz and her friends sing familiar melodies with dummy lyrics that are truly dumb (and, again, uncredited). The refrain in Joan Osborne’s dreamy 1995 ballad “One of Us” becomes “What if Cher didn’t have a trust?” Remember the Spin Doctors’ “Little Miss Can’t Be Wrong?” The title line now rhymes with a stoner’s interjection, “Hey, did either one of you see my bong?” Join in, everyone!

While bowdlerizing the Spin Doctors is no crime against the American songbook, it has a grating effect—like karaoke night attended by lame improv comics. There’s a student in the show addicted to plastic surgery, always showing up to class in facial bandages. She’s a walking metaphor for the overall enterprise: unnecessary medical procedures with very little payoff.

It’s a pity, because the core material of Clueless—itself a modern update of Jane Austen’s Emma—could have made a perfectly charming musical. Cher (Dove Cameron) is our perky, impeccably dressed heroine, a popular girl whose vanity and shopping-mall materialism are tempered by a good heart. Cher and her other singer-monikered friend, Dionne (Zurin Villanueva), rule their school with kindness, helpfully giving the new girl, grunge-chick Tai (Ephie Aardema), a makeover, or love-trapping two singleton teachers in order to raise their grades. Heckerling’s sly and stylish fable is a breezy satire on California wealth and teen culture, grounded by a touching, gradual romance involving Cher’s politically alert ex-stepbrother, Josh (Dave Thomas Brown), who is as socially conscious as Cher is superficial.

In theory, this is prime fodder for canny songwriters who could channel a smart version of the period’s new jack swing, ska-punk and dance-pop. Benj Pasek and Justin Paul (Dear Evan Hansen) could have taken a whack at it. Of course, then Clueless the Actual Musical would have to compete with Mean Girls, Wicked, Frozen, Be More Chill and, er, Dear Evan Hansen for tween/teen dollars in Broadway’s current youth-glut. (Remember shows about people who don’t live at home with their parents? Whatever happened to those?) There’s the added problem of target demo. Millennials born after the movie came out have their own generational soundtrack; those of us who caught these tunes in the fleeting background of our twenties and thirties can access the real thing on Spotify.

In this unenviable damned-if-you-do scenario—go original or go jukebox—Hanggi and Heckerling opted for spot-the-hit jokey nostalgia, hoping we’d care enough about their heroine to overlook the synthetic tackiness. Cameron is unnervingly cute, like a creature genetically engineered by scientists obsessed with Kristin Chenoweth, and she has a nice voice that sometimes cuts through the overproduced sound mix.

As her eye-rolling romantic foil, Brown exudes the right amount of affectionate exasperation. And the young and toned ensemble certainly werks their fly dance routines by Kelly Devine with unflagging brio. But the soul of Clueless is lost amid the clatter of sight- and sonic gags that have been cynically staple-gunned together to a condensed version of the plot. The spoofy formula worked better for Hanggi in her long-running Broadway hit Rock of Ages, which married ’80s hair bands to a dopey but original L.A. success story. But Rock of Ages was exuberantly crass and stupid top to bottom, and Clueless requires a subtler, more intelligent touch.

In the end, the creative team is both too faithful to the screenplay (one bad-driving scene is plenty) and too irreverent with the pop spirit of the period. Both are shortchanged, and we get neither a compelling stage play nor songs that anyone could fall for. Ladies, I’m afraid the makeover only made things worse. 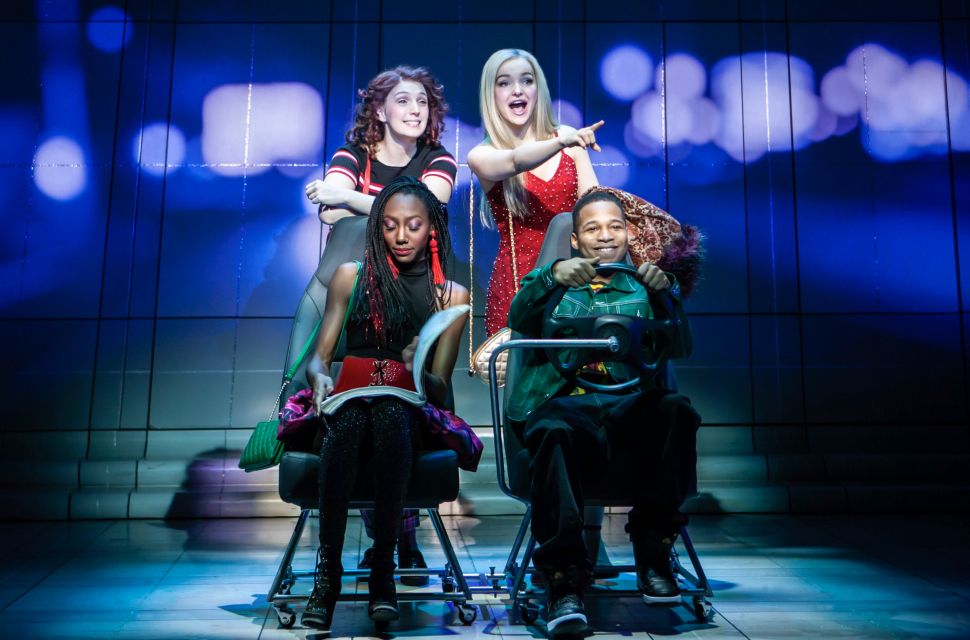