We’re not far into the new year, but after two harrowing years of Trump scandals and a government shutdown now in its 31st day, 2019’s feeling pretty volatile.

There’s no hiding from this level of chaos, but some solace can be gained by looking at what artists were doing during similarly fraught times. Over the past decade, exhibitions such as MoMA/PS1’s 2010 exhibition 1969, and reflections like Holland Cotter’s 2015 essay on the Met’s disgraced 1969 exhibition Harlem on My Mind, have repeatedly returned to 1969 as a context of renewed importance. Now, on the 50th anniversary of that momentous year, the relationship between then and now seems even more obvious. Richard Nixon, a crook, had just been inaugurated. President Donald Trump is surely worse. Vietnam War casualties were mounting by the day. Today we seem stuck in an endless Syrian war. Martin Luther King Jr. had been assassinated just months ago, sparking riots and stoking racial tension. Eric Garner, Freddie Gray, and Philando Castile were all killed by police officers, and we now have members of congress openly supporting white supremacists.

Art isn’t going to give us that kind of one to one comparison, but the below survey of the year’s major art works on view at museums is useful in other ways. It reveals an art world vastly different from our own, and yet in many ways still the same. Let’s take a look.

1969 Turns 50 at the Memorial Art Gallery in Rochester.

The perfect place for a deep dive into 1969, this exhibition takes a magnifying glass to the art and context of that time. According to the gallery, the year bore witness to such extraordinary transformation that it inspired the entire show. Those events include landing on the moon, the Soviet takeover of Czechoslovakia, and Woodstock and “Abbey Road” to name just a few. The corresponding works fall into three categories; abstraction, documentation and stuff that’s somewhere in between.

According to New York Times Art Critic Holland Cotter 1969 “felt like a slow-motion explosion.” The reasons for this are obvious (Nixon, the War, King’s assassination) and it’s within this context that Philip Guston produced Edge of Town, a self-portrait in which he imagines himself to be a member of the Ku Klux Klan. The hooded figures had long been an element in his work—they first appeared after the Klan vandalized one of his murals in 1933—but this image almost vibrated against King’s assassination. “The idea of evil fascinated me,” Guston wrote. “I almost tried to imagine that I was living with the Klan. What would it be like to be evil?”

Was there something about the unique context of 1969 that sparked Sol LeWitt’s now famous instruction-based wall drawing series? Contemporaries like Yoko Ono, John Cage and Lawrence Weiner had set the stage with their own instruction-based work made years earlier, so that would certainly have been an influence. But like a lot of art, LeWitt’s drawings were completely detached from current events of the time. There’s no moral obligation for an artist to make politically engaged work and his pieces (currently on view through 2043! at MoCA) offer a great example of why that’s OK. We all need ways to process the news cycle, and often that means finding ways to turn it off for a while. What better way to do that then through his early graphite on drywall pieces? No other work dazzles the eyes so completely.

Josef Albers, Study for Homage to the Square: Starting, 1969. On view now at the Guggenheim Museum.

Josef Albers’ study of chromatic color interaction through nested squares began twenty years prior to the making of this painting in 1969, but the work sure represents a highlight. And those highlights are needed. Albers created hundreds of paintings and prints in his series “Homage to the Square,” and while they all follow the formula outlined above, they vary greatly in quality. The best ones, like the piece on view at the Guggenheim, have a visual hum to them that ensure a viewer never tires of looking at them.

Flavin’s minimalist light sculpture resembles iconic skyscrapers like the Chrysler Building and the Empire State building, but it was inspired by an unrealized work by constructivist artist Vladimir Tatlin. Made in 1920, Tatlin’s maquette of a spiraling cone-shaped building intended as a monument to an organization supporting Communist revolution. Like Tatlin’s piece, Flavin’s light monument evokes the idea of prosperity and optimism for the future.

If there’s one thing that hasn’t changed enough since 1969 it’s the number of women artists shown in museums. The vast majority of major work on view from 1969 is made by white male artists and this list reflects that. Lee Bontecou serves as a notable exception to this male dominated world with her vacuum formed fish mobile being one of the more exciting pieces from that decade. There’s no hesitation of self-consciousness to this work, thus imbuing it with a powerful presence. 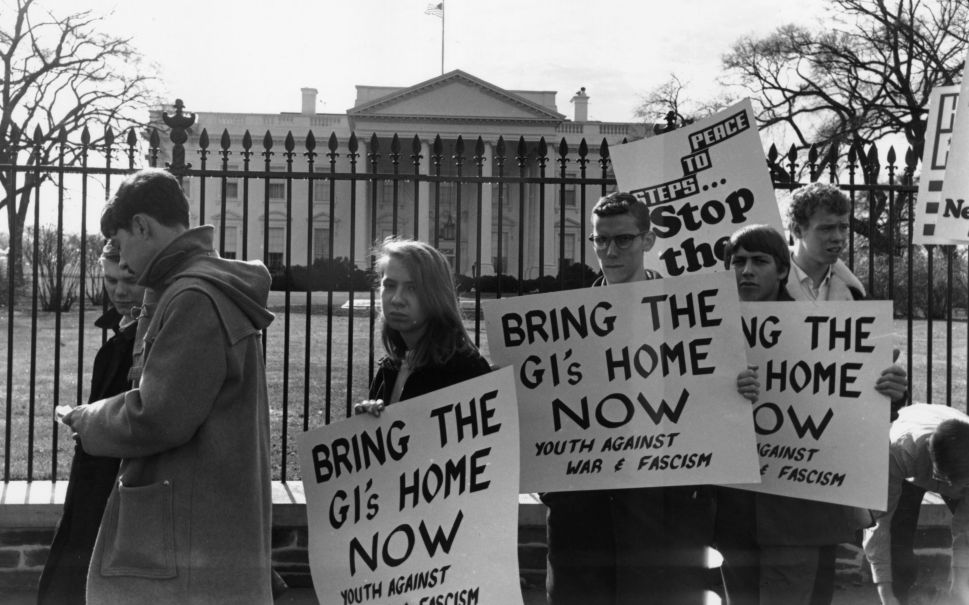