If anyone out there needs more proof that 2018 was the strangest year on record, then please consider that we’re starting 2019 with Jim Carrey as the world’s best-known living artist. Sure, David Hockney may sell for big bucks, and Banksy still has his stunts, but neither get the breaking news treatment that Carrey receives every time he tweets out a squiggle.

Our culture, and the art world in particular, is mired in introspection over everything from how to respond to Trumpism to how to make public collections more diverse and inclusive. And that’s great—those conversations are vital and necessary. But it’s Carrey’s particular combination of name recognition, a raw and graphic style, and penchant for tackling hot-button issues that’s best bridged public discourse and fine art.

Carrey, however, is far from the only actor to turn their passion for painting into a noteworthy side gig. The past few years has seen a deluge of actors landing prominent roles in the fine art ecosystem, from guest curatorships, to collecting, to obtaining gallery representation, to having art shown in solo exhibitions. The art world seems to be embracing actors’ diverse creative skills like never before, and with good reason—getting a member of the general public who might not be so well-versed in the arts through your gallery doors for a big celeb name could be the experience that keeps them coming back. And celebrities, too, get to legitimize a pastime that for so many can only be called a hobby. Everyone wins (though struggling artists breaking into the field might have some understandable resentments). Here are six actors who dabble in art that you could see hanging their creative pursuits on gallery walls this year.

Anthony “Hannibal Lecter” Hopkins has been painting for years. His paintings have found their way into collections worldwide, and are on permanent display with Harte Gallery in Lahaina, Maui. His art-world business partner, Aaron Tucker, wrote a book on his work titled “Anthony Hopkins Dreamscapes” that retails upwards of $225 (a couple used copies are at $167.97 on Amazon). His paintings generally take a surreal-adjacent approach to landscape and figuration that are reminiscent of certain works by Picasso and Dali. If you’re on Maui, it’s definitely worth rolling out of bed and heading over to Harte Gallery between Mai Tais to check out this thespian’s hallucinatory visions.

Billy Dee Williams, otherwise known as Lando Calrissian from the original Star Wars trilogy, is an established painter with work in many notable corporate, private and public collections. He even has a self-portrait in the National Portrait Gallery in Washington, D.C. Williams’ painting practice focuses on airbrushed acrylic, while his subjects vary from celebrities to his filmography and historical figures. His work is for sale with several galleries, making him atypical for a celebrity painter sho usually has one rep. Most paintings seem to sell in the $1000 to $10,000 range, but the larger and more intricate pieces are priced for upwards of $30,000.

Kasseem Dean, AKA Swizz Beatz, has been responsible for some of the most iconic music of the last twenty years (think “Money in the Bank” and “On to the Next One”). Outside of music, Dean and his wife, Alicia Keys, have been heavily invested in the art world, cultivating a world-class personal collection of work from Kehinde Wiley to Ansel Adams (known at The Dean Collection) and creating initiatives that help new artists get started in the industry. Dean also has a personal painting practice, and is known to gift his work to friends and colleagues. He’s decided against turning this passion into a career (though you can get a glimpse of one of his works here), despite support from prominent curators like his mentor Jeffrey Deitch. Instead, he opts to use his fame to help young artists, rather than creating another income stream. But if he does eventually decide to put on a show, it’s likely to be a star-studded blockbuster worth traveling to see.

Jemima Kirke has two exhibitions under her belt. The more recent of the pair was just in 2017 at Sargent’s Daughters in New York, and featured depictions of contemplative women posing in their wedding dresses. Sitters included Kirke, her sister Domino, her Girls co-star Allison Williams, and other former brides in her orbit. At her best, Kirke is well-versed in early modernist modes and capable of injecting a searing psychology behind evocative eyes. The 2017 show totally betrays her BFA in painting from the Rhode Island School of Design, and makes us all wonder what her follow-up will be.

Film and television star Lucy Liu has been in the art game since 1993, when her first solo exhibition hit the now defunct Cast Iron Gallery in New York City. Liu’s craft embraces everything from calligraphy to found objects, erotica, embroidery, photography and more. Liu often uses the name Yu Ling for her artistic endeavors in hopes that viewers will forget about her stardom and concentrate on the work. Of everyone on this list, her voice is the most refined and suggestive of a marriage between vision and talent. Anyone traveling to Singapore this winter should head over to the National Museum for Unhomed Belongings, an exhibition featuring Liu’s “Lost and Found” series.

Viggo Mortensen, star of Green Book and Lord of the Rings, has been displaying his professional photography and painting skills since the 1990s. His work is notable for its meditative moods that span portraiture, landscape and abstraction. Mortensen’s commitment to the arts is total. While filming LOTR, he somehow made time to found Perceval Press, a small publisher dedicated to promoting the work of artists and poets. The press promotes visual textual, and audio works that, as the company’s “about” page trumpets, “otherwise might not be presented.” It also sells books featuring Mortensen’s work, which you can see here. 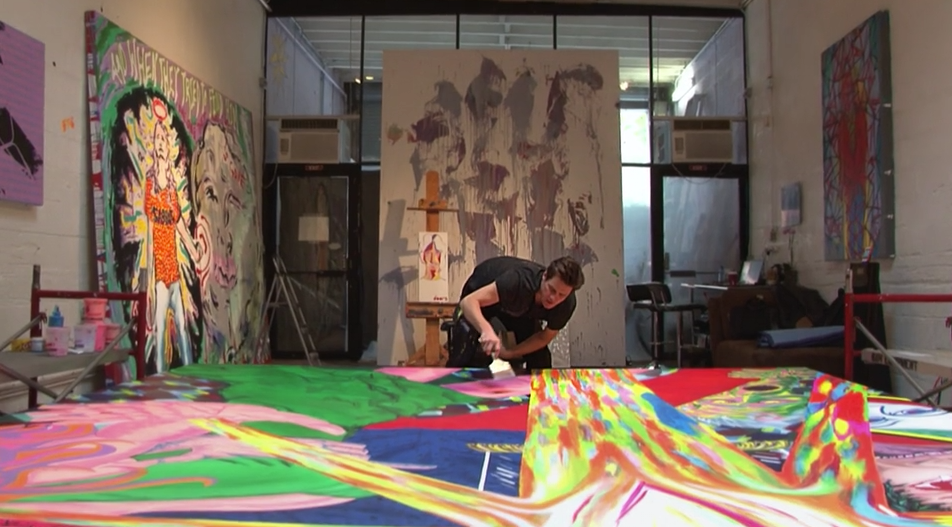