Last fall, the 22-year-old Australian pop star Cody Simpson joined the Broadway cast of the musical Anastasia. Simpson, who spends most of his time in Los Angeles, had acted before—he’d had the occasional cameo on sitcoms like Cougar Town—but being in a big splashy musical had always been his dream.

“It was something I wanted to challenge myself to do,” said Simpson, a little more than an hour before a winter performance at Manhattan’s Broadhurst Theatre. “I jumped at the opportunity. It was a way for me to expand and broaden my horizons.”

Simpson is the latest in a line of pop stars who have recently been cast as replacements in Broadway musicals, including Jason Mraz in Waitress and Brendon Urie in Kinky Boots.

“In a rock show, the audience can chime in—all of those ethical boundaries are thrown out the door,” said Simpson. “For the Broadway experience, you’re putting on a spectacle for the audience and you’re playing out their fantasies for them. They should be quiet and let you do that.”

In Anastasia, Simpson plays Dmitry, the Russian Artful Dodger–like love interest of the eponymous princess. Offstage, he is still playing the role of an avid surfer, though one who has to adjust to freezing New York weather.

“It’s a bit of a struggle having been a beach boy all my life, but it’s not too bad, mate,” Simpson said of his time on the East Coast. “It gives you a chance to wear some more clothes.” 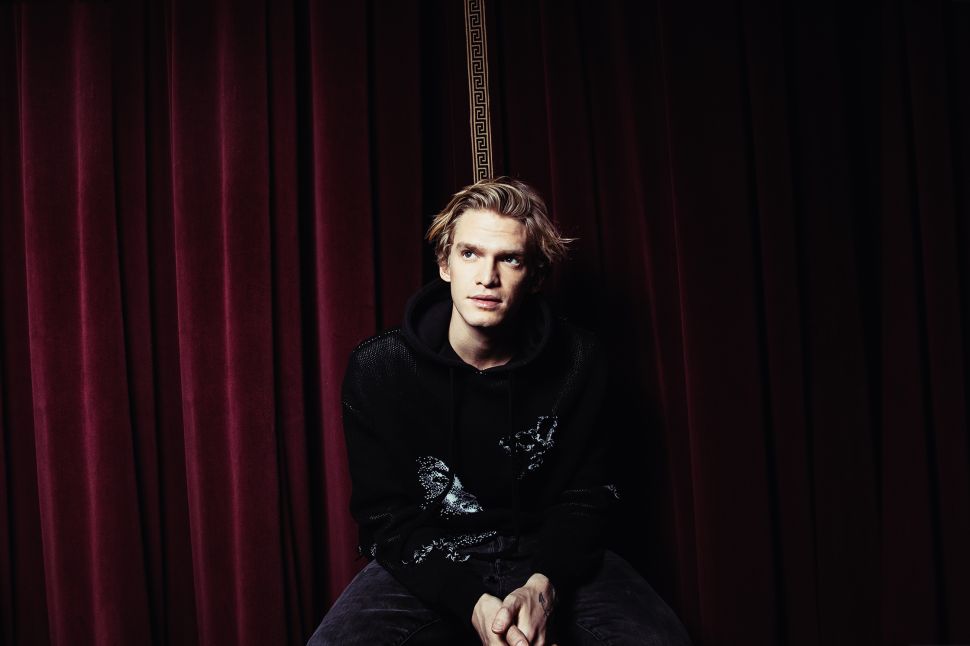 Observer: What do you eat before a performance?
Simpson: I don’t really have a ritual. I don’t like to eat a whole lot of dairy because of my voice and all that. I like sushi or a good veggie burger and fries.

You’re going on in about an hour. Are you feeling nervous or excited?
Both. But I wouldn’t want to sacrifice nerves. They’re a natural phenomenon. They mean you care about what you’re doing. When you’re up there it gives you a pep in your step. I enjoy getting nervous.

Do you get nervous before a concert?
I get nervous before any kind of public presentation, whether it’s speaking at the U.N. or performing on Broadway. It’s a common sensation when a lot of eyes are on you. It’s hard to feel that you’re not going to be judged. You want to do a good job.

Is it a different kind of nerves on Broadway?
It’s quite similar. You’re about to do something that you hope has a positive outcome.

Is doing Anastasia harder than you thought it would be?
I didn’t really have a solid concrete expectation. I went through the rehearsal process, and I think rehearsing six hours a day is almost more strenuous [than eight performances a week]. I’m just kind of feeling it out as I go. If you want to achieve anything great, you have to make some sort of sacrifice.

What’s it like doing a Broadway show as opposed to doing a concert?
Playing with my band [Cody Simpson and the Tide] or doing my own thing on stage, I’m also embodying a character. I’m assuming a role as entertainer, which is obviously different from my everyday life. But playing Dmitry, or any character in an actual story, it’s very different. You have to assume a whole new book of rules and a list of characteristics you may have created specifically for your character. I’ll spend five or 10 minutes in the dark before our places are called just to revive the artificial memories of Dmitry’s childhood, or experiences with his family, or his outlook on the political climate at the time. It’s only going to make your performance that much better.

What exactly do you do before going on stage?
I’ll do a meditation. I’ll shadowbox to get the energy flowing. Otherwise, I drink tea. Throat Coat tea. And they have to cover my tattoos with makeup.

Does it take you a while to come down off a performance?
Absolutely. That’s the toughest part about it. You want to keep talking loud and screaming. You kind of have to learn different methods of relaxation. I’ll have to do some deep breathing and force myself to shut down. I usually go to sleep around 1 a.m. and wake up around 10. 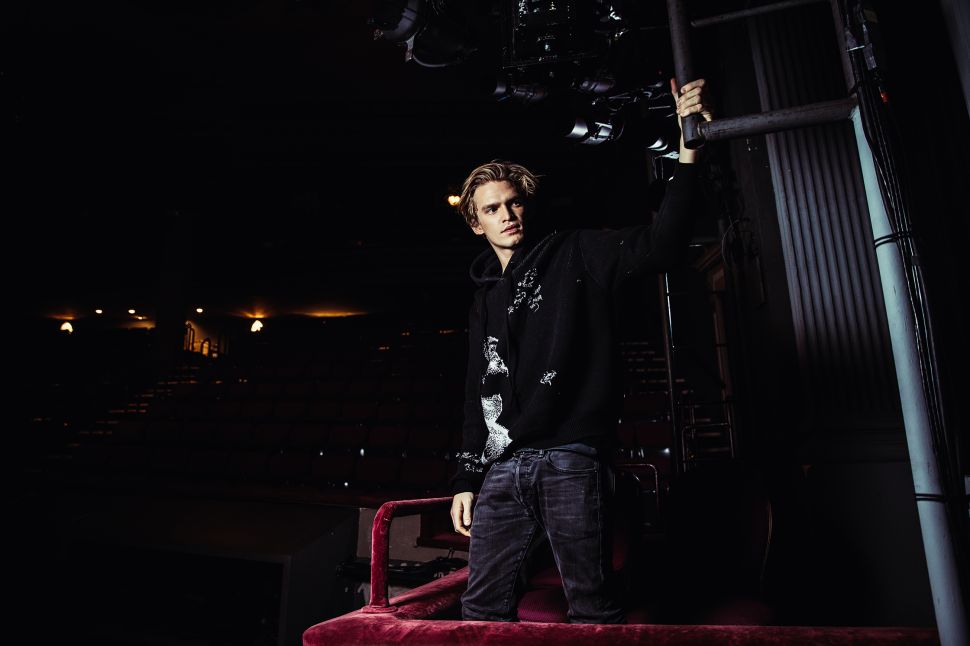 What show are you binge-watching right now?
The Marvelous Mrs. Maisel. It’s the first TV show I’ve ever gotten into. I’m on Season 2.

What was your favorite movie of last year?
I’ve been a huge Harry Potter fan my whole life, so the first one that comes to mind is Fantastic Beasts: The Crimes of Grindelwald. I’m a huge fan of Johnny Depp and Eddie Redmayne.

Do you have a favorite musical?
Guys and Dolls. I first saw the film with [Marlon] Brando and [Frank] Sinatra about two or three years ago, and it immediately became my favorite musical. I’m a huge fan of that era—the romanticism, New York City and the style of the music in general.

If you were to star in it, would you play Sky Masterson or Nathan Detroit?
I’ve always said Nathan. He’d be a dream to play.

How is being in a Broadway show like surfing?
I haven’t really thought about the correlation. I guess in a way there are moments on stage where some nights you’ll be very aware of what’s happening around you, where you’re at, your thought process. And some nights it will all kind of happen second nature and you’ll almost forget where you are. And 15 minutes later you’ll remember you’re up there on stage. When you’re up on a wave you’re getting sucked into a slipstream. That happens to me on stage. I call it “the flow,” whatever that means. 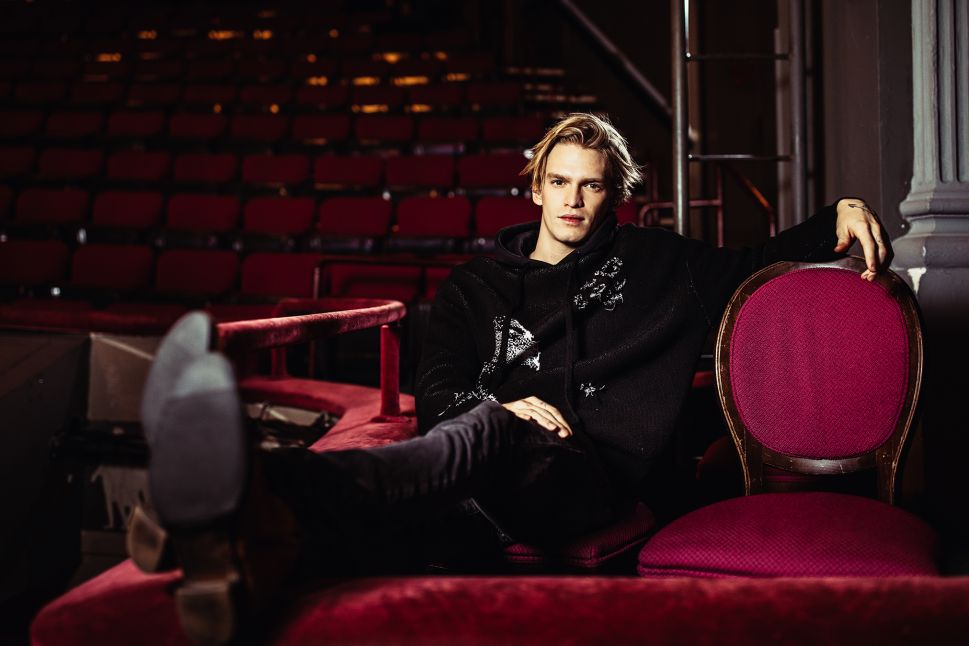