Artificial intelligence (A.I.) has long fascinated the world’s front-line business leaders and policy makers at the annual World Economic Forum (WEF) in Davos, Switzerland. Over the past five years, this budding technology has increasingly taken the central stage at the gathering.

At first, A.I. was just an esoteric tech term few people actually understood. But before we knew it, it became embedded in everyday consumer gadgets and emerged as a top priority on the minds of CEOs and policy makers. And before long, a small future-minded bunch started to think about the downsides, how A.I. could create a new class of “digital refugees” and worsen inequality and social divides.

To help you better understand how this rapid transformation took place and how the world’s most powerful people are handling it, here is a recap of the most important discussions about A.I. at every Davos forum over the past five years.

2015: A Robot Thing Among Academics

In January 2015, A.I. was still a niche computer science area discussed among academics. A member of that circle, UC Berkeley professor Stuart Russell, introduced it to the public as a potential solution to free housewives from everyday chores.

“We have already developed a robot who can do the complete laundry cycle. It is able to pick up a big bin of laundry, sort the clothes according to the sort of wash it needs, put them in the washing machine, take them out, sort them again and fold them,” Russell told the audience at a panel.

Similar robots can be used to drive a car or used in public transportation. Such self-driving technology has come a long way since those early days.

In a report published by the WEF’s organizing committee that year, WEF founder Klaus Schwab estimated that A.I. would lead the “fourth industrial revolution” and predicted that it would would replace up to 5.1 million jobs globally in the following five years.

2017: Every Major Tech Player Is Talking About It

A.I. officially became the hottest topic in Davos that year. Every tech giant CEO recognized it as a top priority in research and development.

“It touches every single one of our main projects, ranging from search to photos to ads… everything we do,” said Google co-founder Sergey Brin at a panel.

Some CEOs also began to think about the possible negative consequences of technology. IBM CEO Ginni Rometty said her company was to work on an “ethical rule book” for A.I. Microsoft CEO Satya Nadella urged policy makers to think about how to equally distribute the economic “surplus” created by A.I. And the famously forward-thinking CEO of Salesforce, Marc Benioff, floated the concept of “digital refugees,” meaning people whose jobs are taken by robots but haven’t yet prepared themselves for higher-skill jobs.

The wave of A.I then spread to the circle of policy makers. At last year’s Davos, both British and French governments announced major funding programs to facilitate A.I. research in their countries.

China, a quiet early mover in the space, started to get attention, too. Alibaba founder Jack Ma predicted that A.I. would “kill a lot of jobs.” And Google CEO Sundar Pichai compared A.I. to fur and electricity to illustrate its importance.

After a few rounds of A.I. buzz at Davos, this year’s mood on the now household-name technology has turned more cautious than exciting.

Unlike the purely bright outlook held not so long ago for A.I. to revolutionize everyday life, in this year’s Davos talks, the technology is often framed as a weapon in global power struggles or as a danger to the human race in general.

Blackstone CEO Stephen Schwarzman, who travels frequently to China, said at a Wednesday panel that China was on track to surpass the U.S. in A.I. development. “When I go to China, there’s almost an endless stream of people who are showing up developing new companies,” he said. “The venture business there in A.I.-oriented companies is really exploding with growth.”

And Salesforce’s Benioff is back to Davos with a fresh warning, “We are risking a new tech divide between those who have access to A.I and those who don’t,” he said during an address on Thursday.

“I truly believe that A.I. is going to be a new human right. Every person and every country needs to have access to this critical technology,” Benioff explained. “Today, only a few countries and a few companies have the very best A.I. Those who have the best A.I. will be smarter, healthier, richer, and their warfare will be significantly more advanced… Those without A.I. are going to be weaker and poorer, less educated and sicker.” 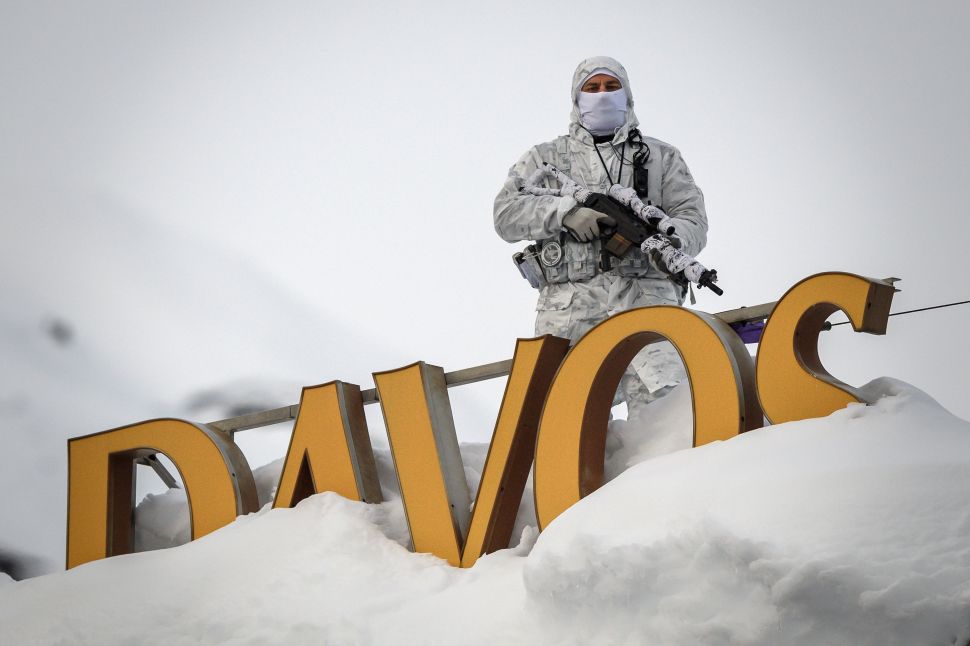