For most of the soprano’s 18-season (thus far) Met career, the soprano—who added the title role of Francesco Cilèa’s Adriana Lecouvreur to her local repertoire on Monday night—has bounced out for her bows like a teenager: grinning, waving and even jumping up and down in glee at the warm reception she invariably wins from New York audiences.

On Monday night, though, she stepped forward haltingly, holding on to the gold stage curtain for support. In the finale of the opera, the poisoned heroine hallucinates she has become something more than human—the Muse of Tragedy, in fact—and for an instant it seemed as if Netrebko’s poetic soul had not quite found its way back into her mortal body.

This eerie metaphysical moment was entirely consistent with the performance the soprano gave in the almost four hours preceding: so ferocious was her vocal and physical commitment that the composer’s sweet-scented music seemed as powerful as the final moments of La Traviata or even the “Liebestod” from Tristan und Isolde.

In my roughly four decades of opera-going I’ve encountered this relatively obscure work a number of times. While some of the artists I’ve heard might have outpaced Netrebko in individual aspects of the role (Angela Gheorghiu for insinuating charm, Renata Scotto for precision of detail, Aprile Millo for sheer vocal glamour), I cannot imagine anyone else, past or present, who could so abundantly fulfill (and sometimes even excel) the possibilities of this role. If I were a diva giving my last performance ever, this is what I would want it to be.

If my praise sounds a trifle hyperbolic, I can only offer the excuse that this whole opera is deliciously over the top. The character of Adriana is an acclaimed actress at the Comédie-Française. At her first entrance—she’s running over her lines for the night’s performance—bystanders literally yell pull quotes at her: “Splendid! Marvelous!”

Onstage Adriana is brilliant in the tragedies of Racine, but her real drama is offstage. She’s in love with this young military officer, Maurizio, who turns out to be not only the pretender to the throne of Poland, but also a sleazy gigolo who is sleeping with the richest women in Paris.

Among those he’s bedded is the married Princess de Bouillon, whose sneers at the “lowly” Adriana are avenged when the actress recites a monologue from Phaedra, pointing directly to the Princess as the tragic character denounces adultery.

After that, the only logical denouement is for the Princess to send Adriana a birthday present of a bouquet of violets dusted in untraceable poison. Before the actress keels over in agony, she screams, “Stand aside, mortals, for I am Melpomene, muse of tragedy!”

Oh, it’s real Technicolor stuff, and if Cilèa’s music doesn’t quite rise to the lurid quality of the text, the tunes are gorgeous and superbly voice-friendly. If Adriana’s melodies stopped short of revealing the real cream of Netrebko’s soprano (her seemingly limitless top notes) she provided fascinating variety with effects ranging from ethereal head tones to a vehement chest register.

In contrast, the seductive music for Maurizio lies precisely in the best part of Piotr Beczala’s shimmering tenor. While I’m in no position to offer an opinion about his abilities as a sex worker, I can say I’d gladly squander the family fortune to hear him wrap his voice around his first aria, “La dolcissima effigie.”

The role of the Princess is short but magnificently flashy, and mezzo Anita Rachvelishvili savored the role like a tigress devouring a bloody steak. In the past couple of seasons her voice has grown to immense size, simultaneously solidifying like a monument from top to bottom. So savage was her final cry of “Restate!” (“Stay here!”) that I felt a little uneasy leaving my seat at intermission.

Veteran baritone Ambrogio Maestri found warmth and beauty in the spiky lines of Michonnet, Adriana’s stage director buddy, which is maybe a bit more than I can say for the conducting of Gianandrea Noseda. His serious reading ranged too far on the symphonic side, highlighting the score’s glittery orchestration but often overwhelming the chattering “backstage gossip” scenes.

Still, that was better than David McVicar’s production, which has finally ended up at the Met after almost a decade touring Europe’s capitals. He seemed determined that no one, performers or audience, would have any fun, playing almost the entire opera in greige costumes among broken bits of scenery and tatty second-hand furniture.

Meanwhile, a full-size baroque theater stage loomed upstage irrelevantly, to be used for only a few minutes during the Phaedra scene. And even then, McVicar made nothing of the heroine’s exit despite Cilèa’s thundering music, grandiose enough to accompany Joan Crawford facing a firing squad.

Fortunately, Anna Netrebko is a jewel that gleams even in an unworthy setting. To see and hear her live and die in Adriana Lecouvreur is not only the highlight of a single season, but a pinnacle of a lifetime of opera-going. 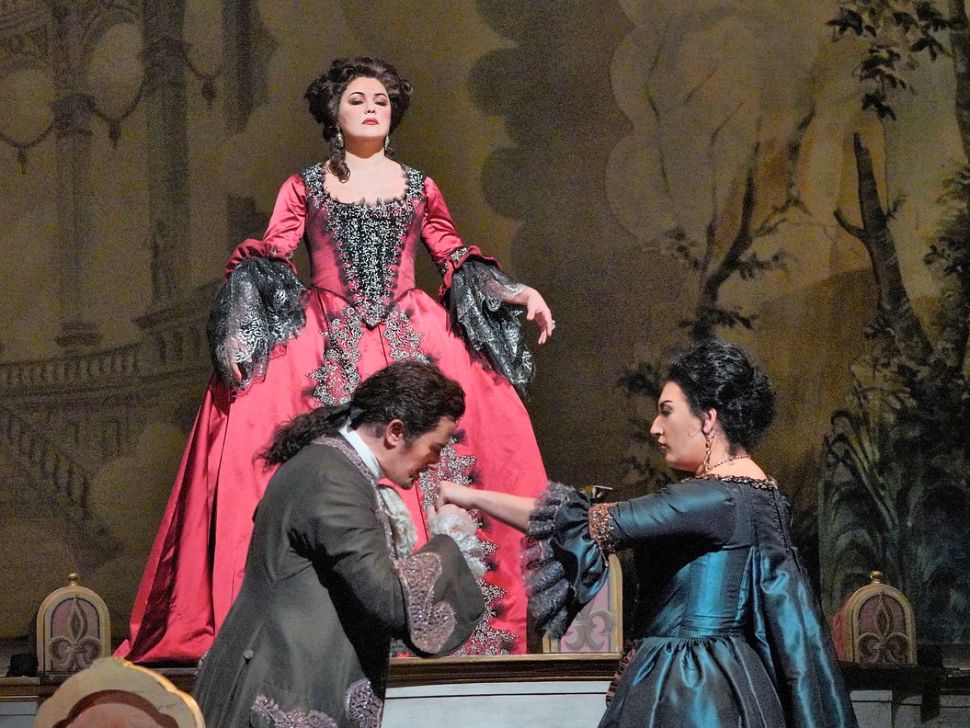