The world’s fastest growing gym franchise is opening a fitness center in Antarctica.

Yes—you read that right. There will be a gym in the world’s southernmost continent. And no, the target audience is not made up of penguins and seals.

Fitness behemoth Anytime Fitness, the world’s largest health and fitness franchise with over 4,000 gyms spanning six continents, is partnering with extreme tourism operator, Antarctica21, to open a state-of-the-art work-out center at the bottom of the earth, making them the first franchise company—in any sector—to fly a flag on all seven continents.

“We recently opened our first gym in Morocco, which was an important beachhead for our expansion throughout Africa, and once we hit that milestone, I said to our team, ‘we need to be on all seven continents.’ Fast-forward a couple of years and now we are just months away from bringing the bold idea of opening a gym in Antarctica into fruition,” mused Anytime Fitness co-founder and CEO Chuck Runyon. “Beginning this fall, Anytime Fitness is not just going to be just about fitness anywhere—it’s going to be about fitness everywhere.”

But’s there’s a catch: you will only be able to get a workout in while gazing out onto the Antarctic tundra during four months of the year.

From November through March—the summer months in the Southern Hemisphere, when temperatures are more like Minneapolis in the winter than the harsh subzero temps that ravage the icy continent during the rest of the year—the Magellan Explorer, a brand new, majestic, 300-foot ice-strengthened, luxury cruise ship will be based off of Antarctica’s King George Island. And one of its unique features will be an onboard Anytime Fitness Center.

“Initially, when Anytime approached us, they just wanted to pick our brains and get some insights about the logistics and challenges of building a gym on the continent; it was certainly a bold idea, but we’ve been operating in the Antarctic tourism business for a decade and a half, and we knew that actually setting up a physical structure on the continent would be a very complex—if not impossible—proposition given the maze of overlapping claims, treaties and conventions that govern Antarctica,” said Francesco Contini, executive vice president of sales and marketing for Antarctica21.

“However, when they made that initial call to us, we happened to be in the early stages of planning the buildout of our new state-of-the-art expedition cruise ship, the Magellan Explorer, and it wasn’t long before we decided that there was a nice synergy between what Anytime Fitness was trying to do and our commitment to providing best-in-class facilities and services for our intrepid polar explorers,” added Contini.

The Antarctic tourism business really ballooned in the 1990s, in the wake of the collapse of the Soviet Union. As the country’s institutions unraveled, and member states declared independence, disruptions in funding from the central government meant that many institutions were unable to pay for the maintenance and upkeep of their considerable fleet of ice-strengthened, polar research ships—many of them belonging to the Russian Academy of Science. As these ships were sold off at auctions, entrepreneurs in the polar tourism business began redeploying them to Antarctica, opening up, for the very first time, tourism to the world’s southernmost continent.

However, these being repurposed Soviet-era research ships, they were not exactly decked out with high-end amenities nor appointed with the finest accommodations—factors which kept the luxury tourism business at bay.

Even after the redeployment of the repurposed research ships to the Southern Hemisphere, the logistics of getting people to the continent was still problematic and stymied more robust growth in the budding eco and adventure tourism sectors.

To get to Antarctica, the typical passenger would first have to fly to Santiago or Buenos Aires, followed by another local flight to either Punta Arenas, Chile or Ushuaia, Argentina, two remote outposts situated near Cape Horn at the southern tip of South America. From there, travelers would get on a ship taking them across the Drake Passage—the body of between South America and the South Shetland Islands of Antarctica.

The trek across the Drake passage—where the Atlantic and Pacific Oceans converge—is one of the most treacherous passageways on earth, and horrific stories of passengers enduring a 50-hour journey of violent and thrashing waves in subzero temperatures (all before even stepping foot on Antarctica) was a big turn-off to many potential customers. Go figure.

All that changed when Chilean-owned Antarctica21, one of the first tour operators in the Antarctic region, rethought the problem. Their big innovation was to sidestep the Drake crossing altogether. By using a Chilean airstrip on King George Island, one of the northernmost islands just off the coast of mainland Antarctica, the company enables its travelers to fly straight to Antarctica, where one of their ships is waiting for them in port, turning what was once 50 hours of seasickness into a pleasant two-hour puddle jump.

“Our customers check their bags in Punta Arenas, and the next time they see their luggage, it’s in their cabin or suite, aboard our ship,” explained Contini. “Flying straight to Antarctica has really opened up the continent to a much larger cross-section of the luxury travel segment.”

Be Prepared to Spend

Make no mistake about it, taking a five-day tour of Antarctica on the Magellan is not for penny pinchers. Accommodations start at $10,000 per person per week and the premium packages can cost up to $35,000 if you decide to go all out.

So far, the high price tag hasn’t scared off many customers; bookings for this fall’s inaugural season are already 70 percent full and way ahead of schedule, according to Contini.

For Anytime, Antarctica Is More Than Just a PR Stunt

For Anytime Fitness, the choice to plant a stake in the ground at the bottom of the world was much more than a simple PR gambit. “We really fervently believe in our company’s ethos of ‘fitness any way you want it, any time you want it and anywhere you want it,’ and being able to hoist the Anytime ‘Running Man’ flag on Antarctica was another way to show to our franchisees across the globe, as well as their customers, that we are deeply committed to providing fitness options anywhere they go,” added Anytime Fitness’ Runyon. “And just for record, we aren’t stopping there.”

Company execs confided that plans are being hatched for an ocean-floor Anytime Fitness—one where the gym will sit well below the surface of the ocean, enclosed within a glass compartment with sea life swimming overhead, much like the celebrated Muraka Hotel Residence in the Maldives. Also in the works: the first Anytime Fitness gym in outer space. How exactly the company will put a gym into orbit is still under wraps, but a company spokesman indicated that discussions with several private rocket operators are under way.

Meanwhile, as Runyon whips up new and exotic locations for future gyms, back on Planet Earth, the franchise is showing no signs of slowing down. Serving nearly 4,000,000 members in over 30 countries, last October, the company celebrated its one billionth gym visit. 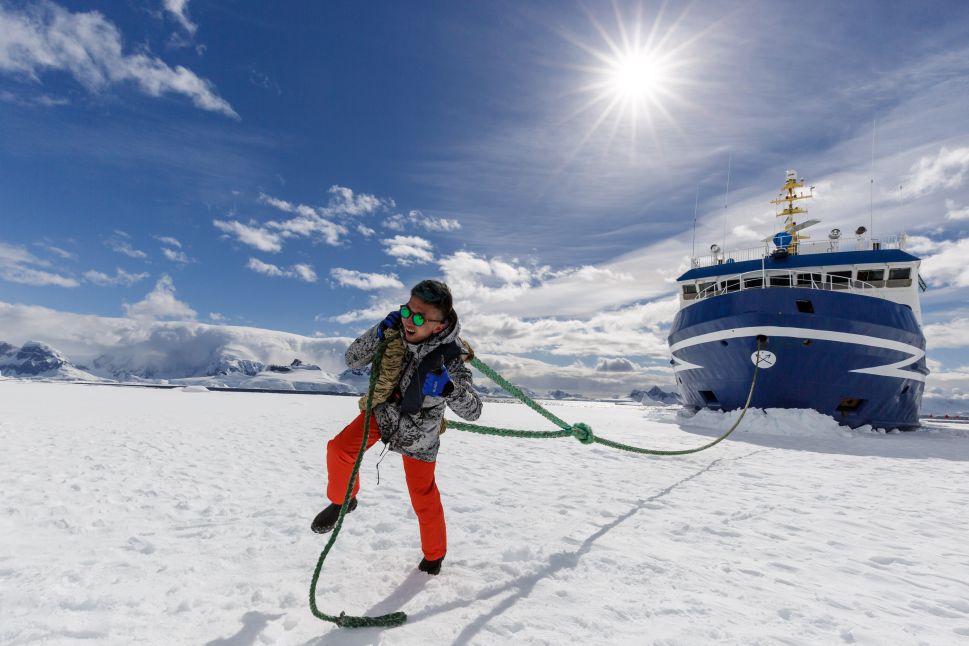