What initially started as a joke between two friends about artist Bruce Nauman’s landmark 1987 video work Clown Torture has turned into a serious body of work in its own right. It all began two years ago when artist Ondine Viñao and a friend who is a curator sent clips of Nauman’s piece back and forth to each other, as well as shared tweets from a Twitter account called @clown_torture. (The account, like Nauman’s original work, will send you half-crazy through simple use of repetition). In passing, the friend commented that Viñao should orchestrate her own version of the piece. The fruits of that labor are now on view at Rubber Factory Gallery in New York in Viñao’s first ever solo show, titled after the work on view, “Holy Fools.”

In Nauman’s Clown Torture, a quintessential jester figure appears in six bizarre scenes that are played in a perpetual loop with the character embodying different clowns in each scene, all of whom simultaneously endure different forms of self-inflicted torture. For instance, in one the clown continuously opens a door that is booby-trapped with a bucket, repeatedly drenching the subject. The loud, repetitive nature of the work has become known for its comment on sensory overload, revealing how something benign or even funny can turn horrific when enacted in a constant loop.

Attracting negative reviews from high-profile critics and audience members alike at the 1989 Whitney Biennial, Clown Torture is synonymous with the kind of work that first posited art can still be art if it’s not enjoyable—indeed, even if it’s downright torturous to witness. As Viñao’s art practice thematically focuses on the ways in which we experience and process trauma, something about his piece resonated with her, despite, or maybe because of, the discomfort it caused.

Performed by herself and three other female-identifying individuals, Viñao’s piece shows them acting out their own unique clown performances, which the artist has constructed from journal entries each contributed about their most painful or traumatic experiences as young girls. In her installation, the videos show each performer singing a song or performing a monologue.

For example, in (Maybe) Eileen Auguste, the character wears a vibrant plaid jumpsuit, red wig and white gloves, using exaggerated hand gestures while performing “Maybe” from the Broadway musical Annie. In Papageno/Papagena, the artist herself poses in a monochromatic clown costume, touching her face and messing up her makeup, mouthing along to a song by Mozart.

The costuming and mannerisms of Viñao’s entertainers are based on two distinct, quintessential types of clowns—the Auguste character is humorous and colorful, while the Pierrot persona is a darker, melancholic one. The actors use these tropes to highlight the nuances around suffering from trauma, wielding them as a shield that prevents them from being entirely vulnerable—either as people or performers. As the artist told Observer, “It’s much easier to stand on a stage or be on camera and discuss your most painful or traumatic memories if you are in character.”

Choosing to keep her subject’s individual stories private, Viñao says that all of the traumas expressed in her work relate to experiences and feelings common in female juvenescence—a formidable period of growth between the ages of seven and thirteen. According to the artist, this is a particularly difficult time for girls, as they often feel like outsiders in their own bodies, and have little control over their own experiences both internally and externally.

Still, Viñao did not purposely set out to make a body of work that is overtly feminist, though she is not opposed to that perception of the work. “As a woman making art, no matter who I chose to cast, it was always going to be read through the lens of my gender identity,” she admitted. Plus, since Nauman is a male artist and she is a female responding to his work, it seemed fitting that she would cast a contemporary reinterpretation with female performers.

While Nauman focused on the complexities around inflicting one’s own discomfort, Viñao’s new work unwittingly shines a light on a rather timely topic—the ways young girls often have to withstand trauma without their control or consent. Ultimately, the work in “Holy Fools” draws attention to the unfortunate realities of most modern-day women, including those who’ve grown up in a time when they were often told to just “grin and bear it.” With this, the artist hopes her performers feel some form of catharsis after participating in the multimedia work. She even called the project its own form of exposure therapy, a process that is often used to lessen the power individual’s trauma has over them. 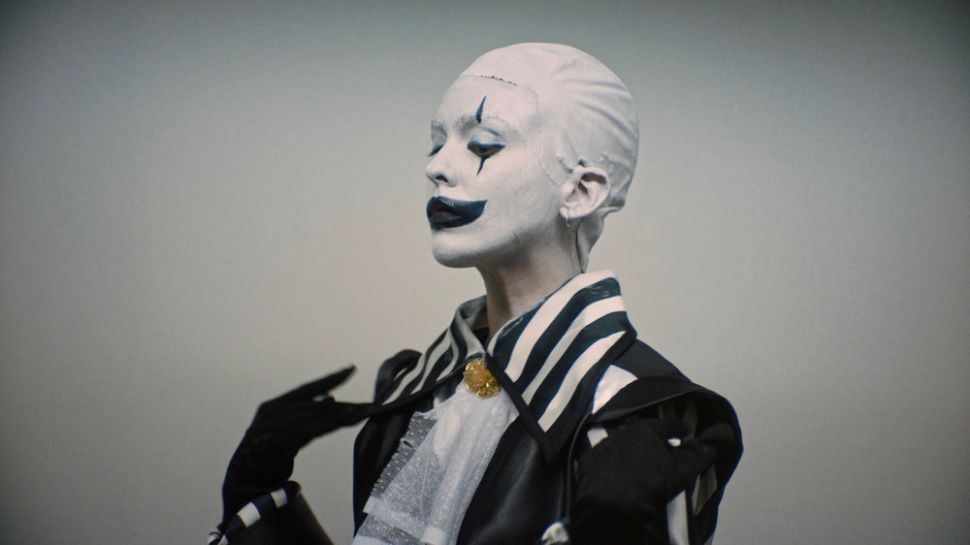