Now that the dark days and dwindling temperatures of winter are upon us, a retreat to the Caribbean sounds even more enticing. But who wants to touch down in a tropical locale only to discover their destination of choice is so packed that they can’t get a good dinner reservation or a decent beach chair? Standing in an endless line is never fun, and dodging familiar faces from home while we’re away is hardly what we mean when we say we need an escape, so this season take the route less traveled and book a truly relaxing getaway to one of the region’s lesser-known isles.

Below, our top picks for the best under-the-radar Caribbean island vacations.

The only coral island in the British Virgin Islands, Angegada is where you’ll find the Horseshoe Reef, the third-largest barrier reef in the Caribbean. It offers a far more low-key environment than some of the more glitzy isles, so don’t go if you’re expecting a St. Barths vibe. The good news is that, much like that island, Anegada is getting back on its feet after Hurricane Irma swept through last year, and it has a brand-new hotel to boot.

The Angegada Beach Club offers both beachfront Palapa Retreats (this is basically a glamping scenario, with a furnished deck and canopy bed right on the sand) or more traditional rooms. The hotel has a poolside restaurant and is known for its kitesurfing, snorkling, kayaking and paddle boarding, and while it’s not über swanky, it will surely deliver if you’re in the mood for a relaxing, scenic beach vacation. From $235 to $400 a night, Angedabeachclub.com.

You can’t get much more under the radar than an actual private island. Guana is an 850-acre resort in the BVIs that just reopened in October after the 2017 storms. It consists of just 18 suites, so no more than 32 guests can stay there at a time. It’s definitely for travelers who want to unplug—it has no televisions or phones, though if you’re absolutely dying to post a shot of the sick view from your room, you can get Wi-Fi.

Outdoorsy types can take advantage of the more than 20 hiking trails, but if you’re mostly looking for a tan, you can hunker down in any of the island’s seven beaches. There’s one main restaurant helmed by chef Xavi Arnau, who previously worked at London’s Nobu and Spain’s El Bulli, as well as an outdoor amphitheater that screens movies. Guana is also a wildlife sanctuary with a big science program; scientists from Stanford and other elite institutions have been going to the island twice annually for the past 30 years to check out flora, fauna and marine wildlife as well as track flight patterns and build coral reefs. Bonus: If you really want some privacy—and have $23,500 to burn—you can rent the entire island. From $785 a night, Guana.com.

For another private island scenario, head to Petit St. Vincent in the Grenadines. The resort covers the entire 115-acre island and is made up of just 22 one- and two-bedroom cottages. The rooms have no televisions, telephones or WiFi, but the truly off-the-grid sanctuary does have its own desalination plant and bottling plant, so you can enjoy fresh from the tap or from one of its reusable glass bottles.

The atmosphere here is eco-friendly and old-school. Guests even use the resort’s original flagpole system, raising the yellow flag on the driftwood pole outside the cottage to indicate a room-service request, or the red flag if they wish not to be disturbed. The tiny island is still plenty fancy, though, with a Balinese spa and a wellness center, two yoga pavilions, two restaurants and seven beaches. Social butterflies, be warned: It’s easy to go your entire trip without seeing another soul. From $1,260 a night, Petitstvincent.com.

Grenada, known as the “spice island” because of it’s lengthy history with spice traders and nutmeg crops, remains one of the Caribbean’s most underrated islands. It’s at the southern tip of the Grenadines, and now’s the perfect time to go, as it just added a big, new modern resort to the mix. Occupying 700 feet of beachfront, Silversands Grenada (part of Leading Hotels of the World) opened its doors on December 1,  offering guests 43 rooms and suites as well as nine private villas to choose from. The resort includes two restaurants, the beach club–style Grenadian Grill and more formal Asiatique, plus a cigar and rum bar. Booking one of its private excursions is a must; they range from scuba diving and fishing trips to a chocolate farm tour and waterfall chasing (during which you must play TLC on repeat, natch). From $800 a night, Silversandsgrenada.com.

Bequia is a seven-square-mile island in St. Vincent and the Grenadines. Its entire population is just 5,000, and there are no traffic lights or chain hotels or restaurants. Bequia Beach Hotel is made up of only 56 rooms and suites, every one of which is decorated in bright island colors with its own private terrace. Leaving the resort isn’t a requirement—it has two restaurants, Bagatelle and Bequia Beach Bar, plus a spa and a gym—but it’s an ideal island to explore through hiking and sailing. Check out the turtle sanctuary or get super fancy and charter a yacht. You actually don’t need to leave the resort for the latter—just book a cruise on Star of the Sea, Bequia’s very own yacht. From $255 a night, Bequiabeachhotel.com. 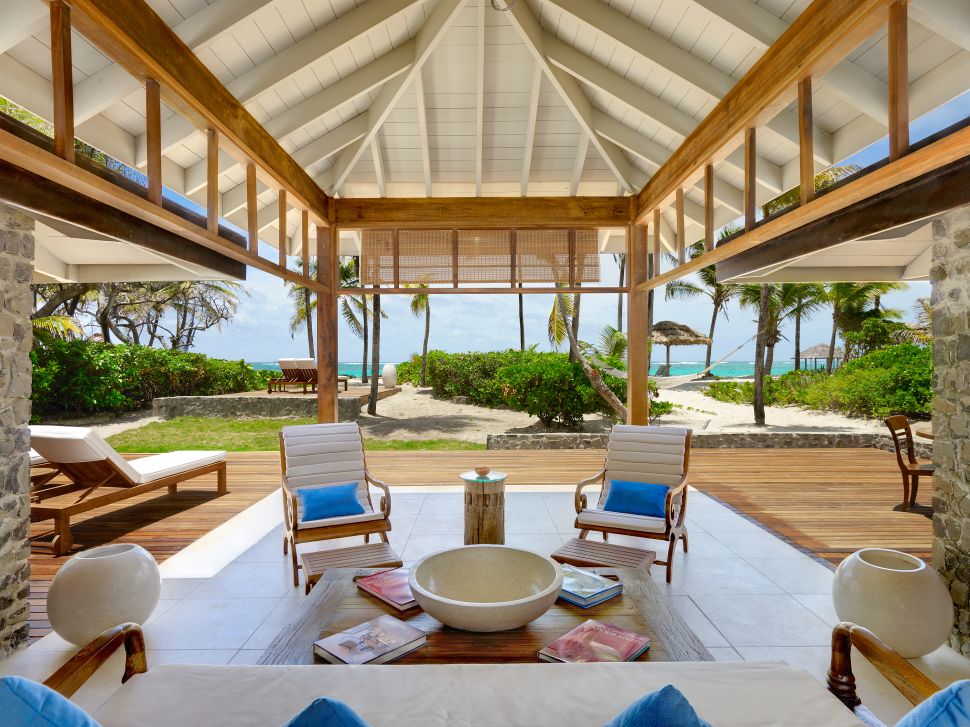