The 1980s is a decade known for taking excess to the extreme in fashion and business. Wall Street was the epicenter of this decadent dream in New York City, but nothing lasts forever, as brokers discovered on October 19, 1987. Showtime’s new comedy Black Monday (premiering January 20) explores the lead-up to that day, the worst stock market crash in Wall Street’s history, with an all-star cast including Don Cheadle, Regina Hall and Andrew Rannells.

Costume designer Melissa Bruning has switched gears from the CGI-heavy worlds of Rampage and War for the Planet of the Apes to the land of huge shoulder pads and shiny suits that made up downtown Manhattan in the mid-’80s. When Observer spoke to Bruning recently, she explained that Seth Rogen and Evan Goldberg, who directed the pilot and serve as producers on the show, were drawn to how she used costumes to make the world look real on these big-budget fantasy movies. “Part of why they hired me was because they wanted me to ground the clothes, to bring a sense of reality. They didn’t want a spoof.”

But there are still plenty of daring looks, as this is a decade in which fashion for both men and women defied the laws of sartorial taste. It was also an age of designer brands, bold colors, clashing patterns and suits for work and play. Bruning shared details about the icons from the era who inspired her looks, why she had to alter a lot of the vintage ’80s finds, and Don Cheadle’s preference when it comes to acting in a suit.

Don Cheadle doesn’t like to wear a suit jacket.

“It was very important to Don to look different than the character he played for the past five years [on House of Lies], who was also a fast-talking guy who wore a suit. We wanted to make sure that when he walked into that sea of suits, his was just a little shinier. It was important for an introductory look to have something that, in a crowd, set him apart.

“He [Cheadle] doesn’t like to wear a jacket a lot. He articulates a lot physically, so we incorporated vests into his look as a way to add an extra bit of flair, but also still keep him very business. You’ll see him start out in a jacket, but then he’ll switch out.

I looked at a lot of research of rock stars at the time for inspiration for his character. I looked at Prince, I looked at Basquiat.”

[For inspiration on Cheadle’s athleisure] “Who would this character look at as the ultimate ballbuster as far as music goes? It was definitely Run DMC—so Mo wears Adidas sneakers from the time with his suits. On TV you hardly ever see shoes, which is unfortunate because we have a lot of great pairs from the period. You just get a flash”

“We wanted to make sure that Regina definitely was in a suit. I wanted her to be stylish, somebody who knows about clothes. Staying true to the ’80s, we tried to use as much ’80s stuff as possible, but also make sure she didn’t look dowdy because some of these ’80s things are really shapeless. [We dressed her in] clothes she felt she could be a boss in, things she felt really strong in. She is really the brains behind the whole company, she knows what is going on more so than Mo.”

“We upped the ante on the shoulder pads because Regina moved differently when we put the bigger pads in. This was a suit we found, but we added bigger, bolder buttons. And the green is for money…not to be too on the nose.”

“This teal dress is vintage. A lot of the dresses needed a little love—they’d seen a lot of late nights. She has these great sleeves on the sequin shrug. I love these big puffy sleeves, they look very 1900s, like the leg-of-mutton sleeve. It makes your arms look great.

“We did have a lot of Christian Dior, Yves Saint Laurent; if I saw a label I grabbed it. There was Thierry Mugler. Oleg Cassini, especially for menswear, Norma Kamali. If ever I was in doubt: “What would Betsey Johnson do?” I would go and look up Betsey Johnson clothes from that time.”

“The red dress we made for the party. There was an image I had of a woman in that red dress, and everybody loved it so much that we made it for Regina. It really defines Dawn. She is such a strong character. She is showy in a way that doesn’t have to be showy, she just is. It is also the color of Limbo [Mo’s car], the object of his desire.”

Andrew Rannells got suspenders because they made him ‘feel like a man’ as a kid in the ’80s.

“The goal with all of these guys is [for them to] visually look like the outsiders, the people you don’t traditionally see. When you look at the research [images], it is a bunch of white faces. There are some women, but they’re usually not on the floor. We wanted to definitely highlight that these guys have their own style and it is a non-traditional office. It is another contrast for us, for comedy too.

“For Andrew Rannells playing the character Blair, there was one quintessential Wall Street accessory he wanted to wear. It was important for him to have suspenders because he said, ‘I remember in the ’80s, getting suspenders made me feel like a man, as opposed to a boy.'”

You can tell the twins apart from their ties.

“[I wanted to] make Lenny and Larry look like individuals, but visually we do need cues to help us. We decided Lenny is more the bow tie and loafer kind of guy. Larry, who is more the lead man, goes with the traditional tie and tends to be in a three-piece suit.”

“The visual I kept coming back to [for Casey] was Delta Burke from Designing Women. She looks like her, she is sassy like her, she could pull off all those jewel tones. We wanted to make her bold. Suzanne Sugarbaker [the character Delta Burke played] really felt like the right choice. We were doing one photo shoot where we had to put her in something and my assistant said “You realize you put her in a Delta Burke? This says, ‘This costume made for Delta Burke.’” It was one she had from Designing Women. I couldn’t believe it. I had to go look at the tag.” 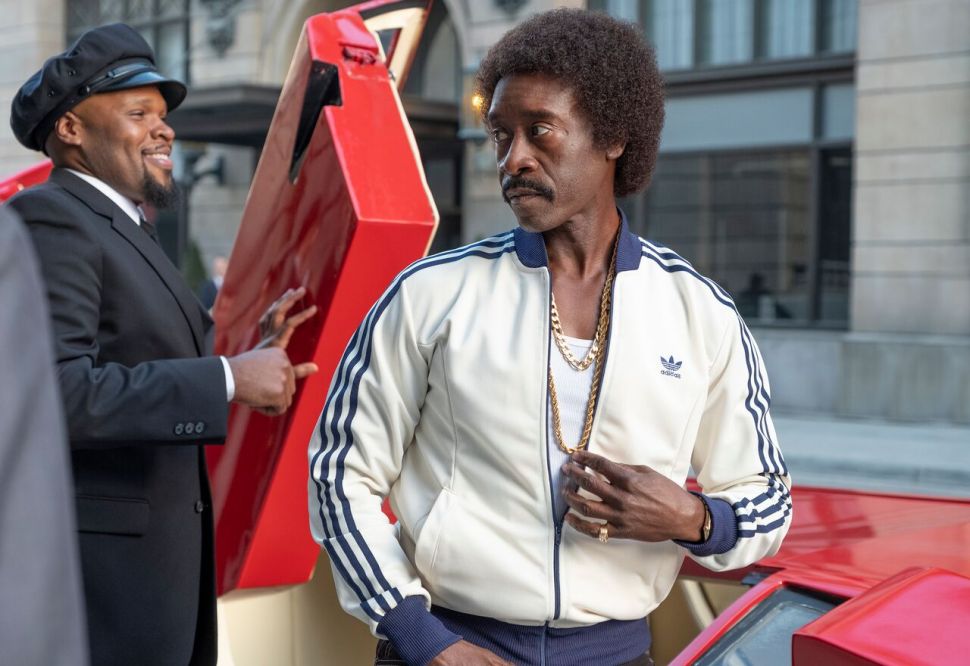