The British Parliament just handed Prime Minister Theresa May one of the biggest legislative defeats in parliamentary history, by rejecting her Brexit plan. These House of Commons politicians may simply be following the will of the British people, who now reject the idea of leaving the European Union only a few years after narrowly approving the plan in a referendum. May should either call for a new referendum, or resign, if she cares about British democracy.

The British people have always had some ambivalence about joining the European Union. It’s more about being independent than being anti-European. This was best illustrated by a story my political science professor told me years ago. After a violent storm in the English Channel, telecommunications between the island and the mainland were severed. The headlines in Europe read “Terrible Storm: England Cut Off.” The United Kingdom newspapers touted the headlines, “Terrible Storm: Europe Cut Off.”

Polls going back to February of 2012 confirm this. Opposition to the EU in the United Kingdom of Great Britain and Ireland was much stronger, with 45 percent wanting to leave the EU and only 35 percent wanting to remain, with 20 percent unsure and the remainder saying they would not vote. Opponents of the EU largely led the polling landscape from 2012 to 2015.

From 2015 to 2016, there was a seesaw battle between proponents of Brexit and opponents, who wanted to stay in the EU. It seemed to change from survey to survey. The supporters of leaving the EU narrowly won out, largely due to wild claims from Brexit supporters, like the UK Independence Party (UKIP), that the country would make a lot of money by leaving the EU.

In addition, support for Brexit was also fueled by opposition to Conservative Prime Minister David Cameron, a free market champion and EU supporter who became pretty unpopular quickly due to a series of scandals, and his policies that struggled to help the UK recover from the Great Recession. I went into a Conservative Party club in 2012 in Oxford and could barely find a Cameron supporter in his own party’s get-together. I found just a tiny photo of him that had been moved to the back of the building.

Support for the EU Rises

But something happened after the Brexit vote. Polls show that the number of undecided votes dropped precipitously, and support for the EU rose. As people realized that voting for Brexit wasn’t like winning the lottery, and that the country was due to face a lot of economic pain for breaking with the European Union, support for Brexit slipped in the polls.

Additional polls consistently show that those favoring the EU would win a new referendum, as people realize the consequences of Brexit, as well as the false promises such a plan won’t deliver.

May, who assumed power after Cameron resigned, sought to capitalize on the Brexit vote by calling for early elections. Instead, this Brexit cheerleader was humiliated at the polls, and her party lost its majority in power, relying on a Northern Ireland party to cling to power.

May sought to negotiate the Brexit plan with the EU. But the plan was so unpopular in 2018 that she tabled it, hoping the House of Commons would like it better in 2019. They liked it less, leading to May’s Waterloo in the vote.  Not since Tory Prime Minister Lord North received the news from Yorktown about the success of the American Revolution has a British politician been so humiliated.

Time for Another Vote

Failing to learn the lessons of her defeat, May refused to call for a new referendum, calling such a move “antidemocratic.” But what’s more antidemocratic: giving the people a new vote and a second chance, or leaving her tiny parliamentary coalition in charge of making the policy. When it comes to democracy, to paraphrase from the film The Princess Bride, I would say “You keep using that word. I do not think that words means what you think it means.”

Former Labor PM Tony Blair, and former Conservative PM John Major, have called for a new vote, showing a rare moment of bipartisanship. Polls estimate that at least 55 percent of the British people want to stay. It’s time to have a fake news-free referendum that doesn’t involve racism or the stabbing death of a parliamentarian who opposed Brexit. Let the British determine their own fate before the end of March, and let’s not leave it up to a lame duck prime minister who doesn’t seem to command a quarter of the House of Commons. 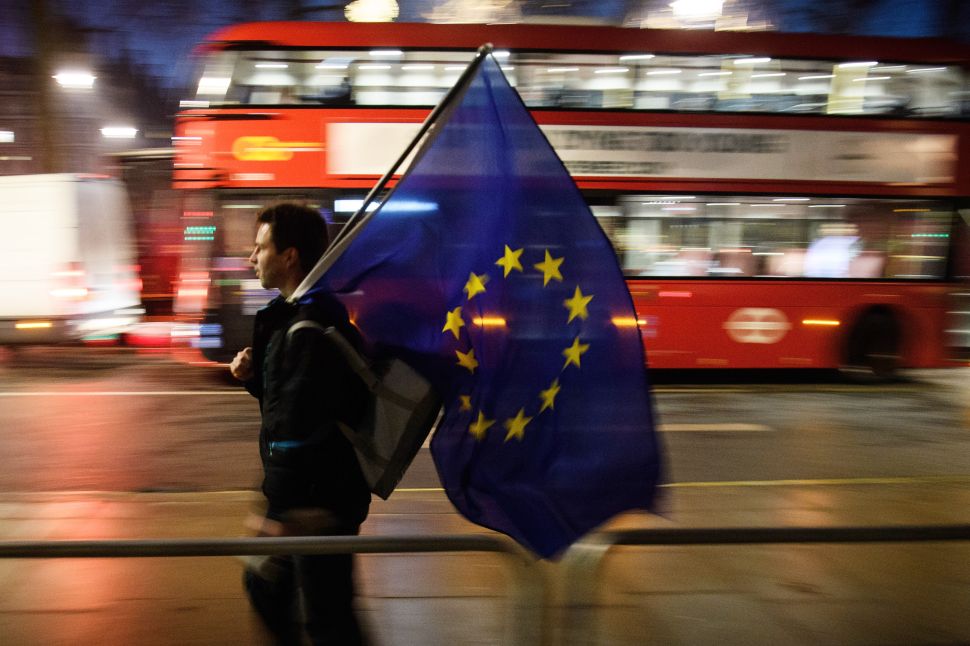