Starting in the 1980s, Frida Kahlo has gradually grown into the art world equivalent of a Che Guevara stencil t-shirt. Following relative obscurity after her death in 1954, the last three decades have seen Kahlo morph into a sort of cult figure, her iconic unibrow and folkloric dress-clad image emblazoned on every kind of museum gift shop merchandise in existence.

People love her. Kahlo, after all, represents an image of Mexico that is digestible. She is exotic, but not too much so. Born to a German father and indigenous and Spanish mother, Frida Kahlo has just the right amount of European heritage to fit neatly beside European Surrealists on the fifth floor of the MoMA—the radicality that made her such an important artist in the first place largely obscured by her emergence as a cultural, fashion-conscious icon.

In February, the Brooklyn Museum will be showing the largest United States retrospective in 10 years of Kahlo’s work. “Frida Kahlo: Appearances Can Be Deceiving” presents an opportunity to give Kahlo back the agency she is too often stripped of in art history surveys, and possibly the chance to reconsider the immense influence she has had and continues to have over feminist artists today—from Ana Mendieta and Kiki Smith to Judy Chicago and Carrie Mae Weems.

In her 2010 book with art historian Frances Borzello, Judy Chicago wrote: “Imagine a biography that examined the career of Jackson Pollock in relation to the ups and downs of his marriage with fellow artist Lee Krasner—inconceivable, yet usually unquestioned with Kahlo.”

Unlike Pollock, though, the physical and emotional turmoil Kahlo suffered throughout her life­­—some of which was a result of her marriage to the famed muralist, most of which was not—was inextricable from her art. To understand Kahlo’s magical realism it is to understand the repeated traumas her body endured, from the polio she contracted at age six that permanently damaged one of her legs to the sexual abuse she suffered at the German College in Mexico City and the near-fatal bus crash that left her bound to a plaster corset for the rest of her life. To understand Self-Portrait with Necklace (which will form part of the Brooklyn Museum exhibition) is to know Kahlo was recovering from a miscarriage and only slowly beginning to regain confidence in herself and her art.

“Appearances Can Be Deceiving” will also, for the first time in the U.S., display a collection of Kahlo’s personal items from her lifelong home in Mexico City, la Casa Azul. The selection of Pre-Columbian jewelry and Tehuana clothing, orthopedic corsets and prosthetics, shed new light on how Kahlo carefully toyed with gender fluidity and consciously chose local forms to highlight the indigenous part of her identity through her sartorial choices.

“The prevailing narrative that women are too often defined by their clothes, their appearance, and their beauty was powerfully co-opted by Kahlo through the empowering and intentional choices she made to craft her own identity,” Catherine Morris, the Sackler Senior Curator of the Museum, said in a statement.

This exhibition focuses particularly on Kahlo’s experiences in New York in the 1930s, a time when her communist beliefs radicalized and she was inspired to frame her clothing as an explicitly political, nationalistic statement (Kahlo even changed her birthday to coincide with the start of the Mexican Revolution). The signature floor-length skirts and billowing blouses the artist became known for are adopted from the Tehuana region in Oaxaca, Mexico, a matriarchal society Kahlo admired for its empowerment of women.

Although the exhibition is solely dedicated to Kahlo, it will be interesting to view her work and beloved possessions in relation the Museum’s extensive holdings of feminist art, including the permanent display of Judy Chicago’s The Dinner Party and over 100 works currently on view from the Elizabeth A. Sackler Center for Feminist Art’s collection.

The exhibition likely won’t change Kahlo’s exorbitantly over-commercialized legacy, but it hopefully will go beyond it, contextualizing her not as an artist who is representative of Mexican art as a whole, but as one who relentlessly asserted her autonomy in art and in life to make a point about femininity, nationalism and cultural identity. 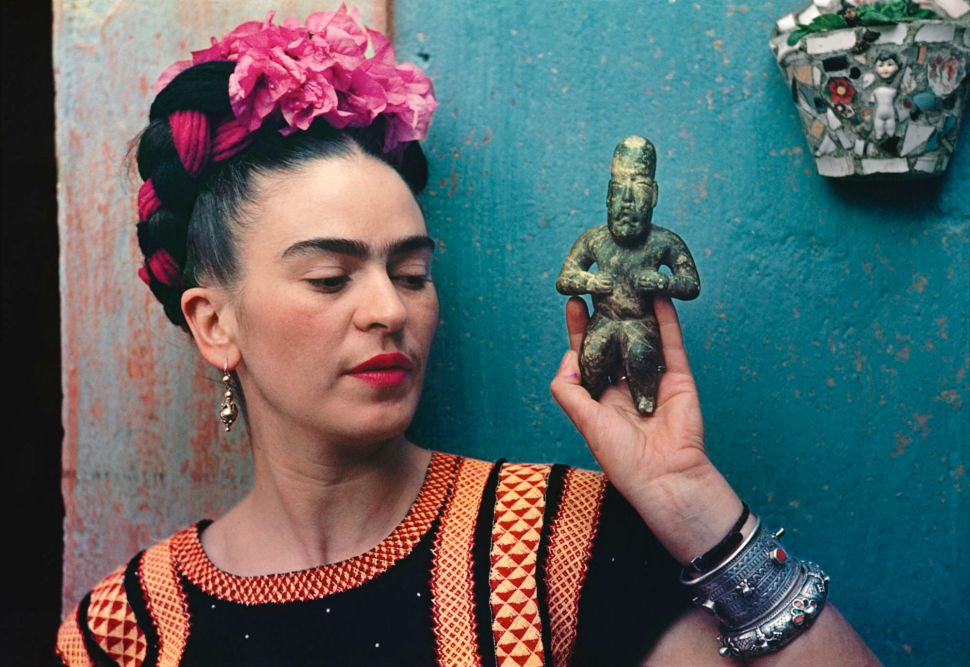