The new City Ballet season opened recently at the Koch with the famous bill—the Greek trilogy—of Apollo, Orpheus and Agon. All-Balanchine, all-Stravinsky. And each very different from the other two. Apollo is the most important—not because it’s the first Balanchine ballet we have, but because it changed everything. This is where neo-classicism begins, in 1928, with Diaghilev’s Ballets Russes: everything pared down, simplified, yet suffused with meaning. Who dances the role of Apollo is a vital matter at City Ballet—will he be the Apollo Belvedere (the glorious noble Apollo—a Peter Martins) or the Apollon Musagète (the boyish Apollo of the Muses, tentative, finding his way—the original Serge Lifar, for one)? Balanchine complicated things when he truncated the ballet, removing the birth scene, so that the God when we first meet him is very young but already cautiously on the go.

The other night brought us a new Apollo, Taylor Stanley, whose work these past few years—in works as different as Balanchine’s Square Dance and Kyle Abraham’s The Runaway—has identified him as the young male dancer in the company with the deepest artistic sensibility. His Apollo revealed serious thought, careful decisions, a beautiful suppleness and the ability to allow us to follow seamlessly his transformation from fledgling to Godhead. You can sense his growing understanding—and acceptance—of both his strength and his responsibilities. This was a lovely performance, tender and grave.

His three muses were a mixed blessing—but not mixed enough, too undifferentiated in height and appearance. Tiler Peck danced impeccably (as she always does), but for me Terpsichore is both more leggy and more self-assured: she knows that Apollo will choose her. Indiana Woodward was an effective Calliope. Brittany Pollack is not ready for Polyhymnia. And, as always, I miss the original ending, in which Apollo and all three Muses ascend the stairs towards transcendence. The tableau Balanchine leaves us with today is a beautiful moment, but it lacks resonance. Fortunately, the Balanchine Trust allows other companies to choose between the alternative endings, and having recently seen the original version elsewhere I can only wish that City Ballet would revert to it.

Whatever its weaknesses, though, this Apollo was Apollo. Orpheus, on the other hand, is the bare shadow of Orpheus, and has been for many years. No other ballet of Balanchine’s has deteriorated to this extent. There are many reasons for this, of which the company’s move to the Koch (then State) Theater has long been recognized as one. Although the story takes us from Earth to Hell and back again, it’s an intimate ballet—no large-scale actions or set pieces but a work of grief, hope, despair: a highly personal and involving work.

Both the muted action and Stravinsky’s exquisite score were swallowed up by the new large theater, but more importantly, as the decades have gone by, the kind of dramatic performance Orpheus requires went out of fashion—later dancers haven’t been taught what it was about or how to do it justice, and the audience is no longer conditioned to it: Orpheus is from the era of Martha Graham, and not even today’s Martha Graham company looks like Martha Graham.

The original Orpheus and Dark Angel were Nicholas Magallanes and Francisco Moncion, neither a classical technician, both profoundly dramatic dancers. Through the years, there have been fewer and fewer such dancers in the company—the 1972 revival featured the French Jean-Pierre Bonnefous, who understood the necessities. (Astonishingly, the Angel was Moncion, twenty-four years after he first danced it.) Eurydice had been the great Maria Tallchief, at her most thrilling. The revival featured Melissa Hayden, another powerful dramatic dancer. We have no such ballerinas today. Lovely Sterling Hyltin, once again horribly miscast in a power role, was kittenish rather than compelling. Gonzalo Garcia, far from a tragic presence, was a hangdog Orpheus, going through the motions: no wonder the Bacchantes tore him apart at the end. And the Dark Angel was…Peter Walker. Peter Walker? A pleasant enough performer, but as the implacable Dark Angel? They even got it wrong with the leader of the Bacchantes—originally the tall, dominating Tanaquil LeClercq, now Unity Phelan, a very talented dancer but neither tall nor dominating. She disappeared among the lesser Bacchantes.

So City Ballet today doesn’t have the style or the dancers for Orpheus. But that’s no excuse for the production errors, by far the worst of which is the replacement of the glorious white silk curtain that swirls down to the stage at the climactic moment of the ballet with some dreary substitute fabric lacking beauty or glamor or heft. (Whats more, the original subtle brown costumes for Orpheus and the Angel have been tinged with a coarse orange.) And then they muffed the even more climactic moment when Eurydice, struck down, disappears in an instant beneath the curtain, sucked back down into the underworld. Poor Hyltin had to be stuffed under, like a package.

People today, including many critics, don’t understand why the famous Orpheus was for years considered one of Balanchine’s masterpieces. They blame it on the ballet. But they’re not seeing Orpheus. In its early years—and I saw it in its first week, in 1948—it was overwhelming, and went on being so for a long time. Please, City Ballet, let it rest in peace.

As for Agon, that revolutionary work from 1957, it holds its own. But it, too, has suffered. At its heart is the astoundingly original pas de deux for Diana Adams and Arthur Mitchell, daring not only in its thrusting, groundbreaking texture but because it featured a white woman and a black man—potential dynamite in those days. Adams was followed in her role by two equally extraordinary dancers, Allegra Kent and Suzanne Farrell. (And there have been others.) Mitchell was followed by Jacques d’Amboise and Peter Martins. In each case, the two principals were of comparable dramatic and technical authority—the Agon (or struggle) was between equals. Tyler Angle is an excellent partner and a reliable stage presence, but he in no way has the presence and charisma of the remarkable Maria Kowroski, who after 23 years with the company is dancing better than ever. Here is a case of a ballerina with star-power supported by a partner, not two dancers with equivalent strength. And that’s not Agon.

The exact same thing happened the following night when Angle partnered Kowroski in Mozartiana. She was radiant, he was reliable. And in Tschaikovsky    No. 2, that powerhouse Ashley Bouder was partnered by young, elegant Joseph Gordon, a model of classicism lending excellent support. If only he weren’t so boyish….

On the whole, however, Mozartiana and Piano Concerto received creditable and engaging performances, which I cannot say about the most perplexing Serenade I’ve ever seen—and I’ve seen dozens. The curtain went up on a stage so dark you couldn’t really see the dancers’ feet—crucial to the opening of this masterpiece. Yes, things lightened up quickly, but by then it was clear that the tempo of the music was perversely fast—the conductor, Andrew Litton, in his race against time, managed to bleed the romantic surge from Tschaikovsky’s ravishing music. (Later, he slowed down equally perversely.) The worst mishap came at the end. The central figure—Sara Mearns at her most effective—is lifted by three guys whose terrifying job it is to carry her standing on their shoulders, without obvious support, her arms outstretched, as she is transported on a upstage diagonal towards her transfiguration. But suddenly they stopped dead: it wasn’t working. Hold that transfiguration! And the stage was growing darker. Someone had the demented idea that Serenade should begin and end in darkness. (Why didn’t Balanchine think of that?) That City Ballet can’t revivify Orpheus after so many years is understandable. That they can’t offer us an acceptable Serenade is unforgivable.

The Interim Artistic Team of four is doing its best, but there’s no substitute for a tough-minded artistic director. Come on, Board of Directors, this is getting ridiculous. 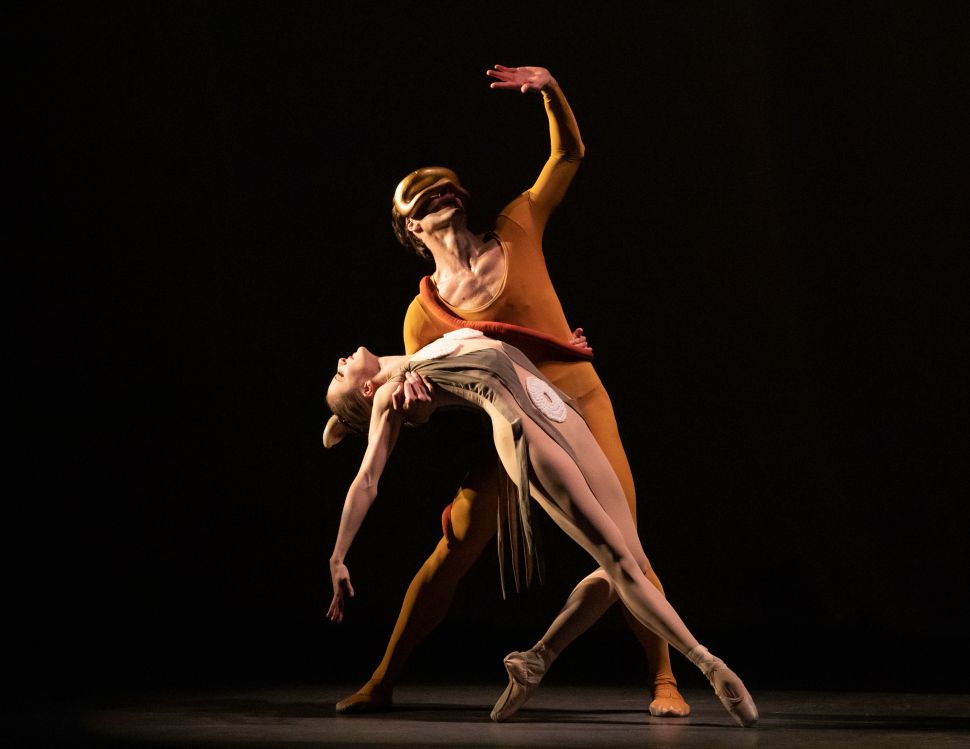