Let’s face it—the big story of the year was New York City Ballet: what did happen and what didn’t happen. We don’t have to recapitulate the scandal that forced three leading men out of the company, and the hush-hush events that led to the departure of Peter Martins who had been in charge of City Ballet and the School of American Ballet since Balanchine’s death in 1983. In May, I wrote that the company “still lacks a leader…. Everything’s on hold, and so are we.” Eight months have gone by—the company still lacks a leader, and everything’s still on hold.

It would be hard to imagine a less distinguished performance than that of the City Ballet Board of Directors—first, never clarifying what led to Martins’ departure (there was an anonymous letter to the School whose contents have never been made public); then hiring a search firm to identify his successor. A search firm? How could outsiders to the dance community have the faintest clue about what it takes to be artistic director of a major ballet company, let alone a company so highly specific in its requirements? From the start, the search firm was a joke: There were never more than half a dozen people remotely qualified for the job, and give or take a few mavericks, just about everybody knowledgeable about the situation could have come up with that list in ten minutes. The Board simply shifted the responsibility to people unequipped to deal with it. Finding an artistic director isn’t the same thing as finding a CEO or a director of development. Ballet is a tiny world, in which everybody knows everybody and everyone knows everything…except when they’re in denial.

All this time the day-to-day operations have been handled effectively by Jonathan Stafford and three young colleagues. Maybe, in desperation, the Board will ask Stafford to take over officially—although, given the sexism issues, I’m sure they’d feel safer appointing a woman. Rumors have been flying and buzzing while the dancers go on waiting to learn their fate. But no one is publicly addressing the basic issue—the issue: whether the new person(s) will build on the company’s Balanchine foundations, or whether City Ballet will turn away from the aesthetic it’s based on. At least one admired ex-principal dancer rumored to be a leading candidate wasn’t a real Balanchine dancer to begin with.

Perhaps the time has come for Balanchine’s company to edge—or lunge—away from him, however painful such a thing would be. (He himself wouldn’t have been surprised or offended.) Confronting this crucial issue is an immense responsibility, well beyond questions of personality and glamour. Does the Board of Directors understand what’s at stake? Can it look beyond agenda and gossip to the heart of the matter? We’ll see, and the sooner the better—a lot of time has been wasted with the doomed search firm. Balanchine said it all: “Après moi, le Board.”

Through all the turmoil, there’s been a lot of good dancing up at the Koch. The celebration of the Jerome Robbins’ centenary was ambitious—18 ballets, including beautiful performances of Afternoon of a Faun, Dances at a Gathering, The Four Seasons, and—brought in from the cold—Debussy’s Antique Epigraphs, a welcome surprise, and a keeper. As always with Robbins, the more pretentious the work, the emptier: In G Major, with the most over-extended pas de deux ever seen on land or sea; The Dybbuk, a murky bore in its first version and in all its (many) later versions as well—won’t they let it die in peace?; Les Noces, tame compared to Nijinska’s masterpiece; and worst of all, The Goldberg Variations—the endlessness of it, the vacuity of it! Watching all this Robbins in so concentrated a time confirmed for me his amazing theatrical genius and, alas, the thinness of his dance vocabulary.

I try so hard to like her dancing! She’s so strong, so eager. So going for broke, even when—as is so often the case—she should be going for something else: eloquence, say, or musicality, or good taste. She had a critical triumph in her Dances of Isadora, but not with me: She scattered roses prettily enough, but there was nothing here suggesting the woman whose revolutionary ardor ignited the world of dance. With her fierce thrust, Mearns rescued The Four Temperaments’ “Sanguinic,” and then gave the most self-indulgent performance of Mozartiana I’ve ever seen, all punctuation, no phrasing. I caught a glimpse of her on YouTube blazing away gorgeously as The Stripper in Slaughter on Tenth Avenue, and then recalled the last time I saw her do it onstage: lax, sloppy. The word everyone used to describe her at the beginning was “creamy,” but that quality is gone, replaced by push and self-indulgence—except when she’s wonderful. What’s it all about? Strength without discipline leaves her the victim of the moment, so anything can and does go….

I don’t have one. Even when she presents stuff I don’t buy, I’m captivated by her daring, intelligence, determination, and charm. This year, at the Joyce, she opened her program with herself walking (and talking) her way through the saga of her early years: Twyla the Minimalist. She was rueful, acute, funny—she forgets nothing and regrets nothing, but although she honors the past, it’s with a gimlet eye. Then—after all, she’s Madame Indefatigable—she flung herself into a free-for-all with her six superb dancers, and, of course, came out on top. (The only sign I saw of her seventy-odd years was when she galloped around the stage a touch cautiously.) And then she pleased everybody by bringing back an early masterpiece, Eight Jelly Rolls, whose rollicking energy masks its brilliant structure. For the first time, she cast some men in what was an all-woman ballet—well, we’re all about inclusivity today, aren’t we?

It’s everyone’s Ailey problem: fabulous dancers, unsatisfactory repertory. Robert Battle, the company’s artistic director, has been fighting the good fight, and with some good results. (A great idea to bring back Talley Beatty’s irresistible Stack-Up.) The major event this season was Lazarus, a full-evening work—the company’s first—by Rennie Harris, the master of hip-hop. Ambitious, at times moving, always fluent, this was a work whose agenda dominated its art. Needless to say, the history of African-Americans in our country is harrowing, but for me this deeply sincere—and highly personal—approach to it was over-insistent and overlong. I admired it, and the wonderful dancers who populated it, but I didn’t leave the theater impatient to see it again. On the other hand, En, a recent work by Jessica Lang, was a happy surprise. Lang has made a lot of dances for a lot of companies, and most of those I’ve seen have left me uninvolved. But she clearly has a strong affinity with the Aileys—and is in fact married to one of them. Whatever the reason, En fit the company like a glove. It grew and grew in excitement—slam-bang dancing in a slam-bang ballet. A buoyant event.

Only that the beloved Trocks aren’t here often enough or long enough. Yes, the jokes can seem stale, and not every work is sublime, but this season we got back Robert LaFosse’s Stars and Stripes Forever, a close (but not too close) take on Balanchine’s perennial Stars and Stripes, baton-twirling and all. They leave out the second (all-guy) movement—the company has too many guys being gals to be able to field twelve guys being guys—but oddly we don’t miss it. The couple I saw do the dazzling pas de deux (the originals were Melissa Hayden and Jacques d’Amboise) were terrific. It’s a killer, and they nailed it.

Another Fall for Dance

It ranged from a horrible tango piece to a beautiful extended duet for two men: the Acosta Danza company with Marianella Boán’s El cruce Sobre el Niágara from 1987. Here was a finer example of same-gender pairing than anything we’ve seen since recently the trope became de rigueur. Also, an inventive, charming miniaturized Petrushka, with Tiler Peck as a ravishing doll and Lil Buck as Fokine’s tragic puppet in whiteface. And a rare sighting of Herman Cornejo and Alina Cojocaru in Ashton’s Rhapsody. And thrilling Algerian street dancers…. All in all, a good Fall for Dance, so welcome after the summer doldrums.

Stages everywhere got darker and darker as the year went by. Whole ballets seemed to take place with no illumination other than the odd spotlight to prove that there were actually dancers out there. I had my eyes checked. I’m not the problem. And let’s not forget voiceovers (usually garbled) and distracting video projections. Remember steps?

Warren Carlyle’s Something to Dance About, a “tribute” to Robbins’ Broadway career—trashy, horribly costumed, badly sung. And City Ballet is bringing it back! A tie at the Balanchine New York City Center Festival between a disgusting Apollo (thanks to the Mariinsky and a British dancer named Xander Parish) and the same company’s disgusting Tchaikovsky Pas de Deux. Please: Balanchine Trust to the rescue!

ABT’s Michelle Dorrance fiasco, Dream Within a Dream (deferred). She knows nothing about ballet—this was just pathetic. Twyla Tharp spent years focused on ballet before she entered the field. Dorrrance—and ABT—just assumed that her tap credentials would do the trick. Even the tap parts seemed exhausted.

Kudos to San Francisco for its Divertimento No.15 and Scotch Symphony at the City Center, and to the Joffrey, for its mostly satisfying Four Temperaments. Also to Miami, for bringing back Mr. B’s ravishing Glinka Pas de Trois.

Herman Cornejo (as always) in everything. And Taylor Stanley for his stunning performance in City Ballet’s The Runaway by Kyle Abraham. Where does this exemplary dancer go from here?

And where does the Times go with its dance coverage? My friend of more than four decades, Alastair Macaulay, has decided to leave his post as the paper’s chief dance critic after a dozen years. He’ll still be writing for the paper, writing elsewhere, teaching, lecturing, travelling—talk about indefatigable! We disagree about a lot of things, but who cares? He’s been a remarkable ambassador for dance. 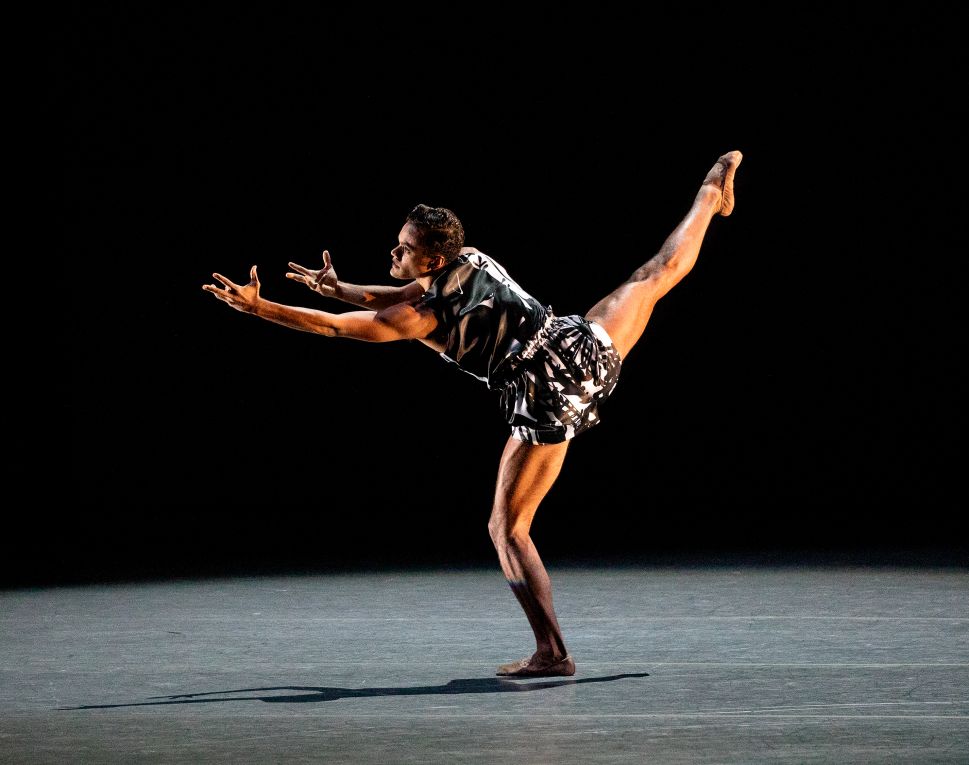